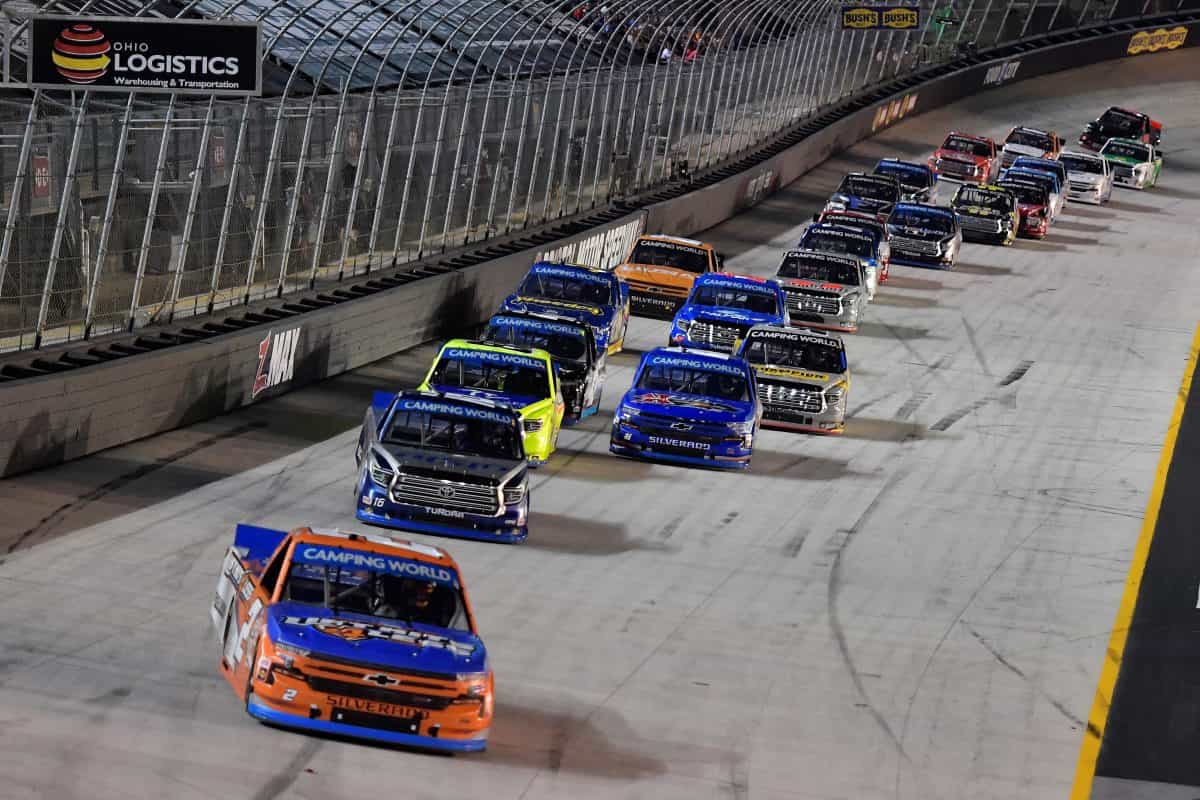 Did you miss last Thursday’s (Sept. 16) NASCAR Camping World Truck Series race at Bristol Motor Speedway? If you did, you missed what could become the beginnings of a rivalry as the season rides into its final four races.

Let’s back up. In case you haven’t paid attention all season, John Hunter Nemechek has been the man to beat, a clear championship favorite for much of the year. But once the playoffs began, it was Sheldon Creed who popped up and blew away the field with dominant victories at World Wide Technology Raceway at Gateway and Darlington Raceway. He was looking to pull off a first-round sweep heading to a Thursday night showdown at Bristol last week.

He almost got it. But after Creed led 189 of the first 195 laps at Bristol, a late-race caution set up a final restart that gave Nemechek’s teammate, Chandler Smith, one more shot at the leader. Smith needed a win to keep his championship hopes alive and was seeking his first career CWTS victory.

This time, Smith got a strong restart and was able to remain right alongside Creed. Contact between the two then sent Creed free-falling through the field to a disappointing 19th-place finish. Meanwhile, Nemechek took the duo three wide and took the lead himself before inexplicably dropping back and letting his rookie teammate sail to the win.

The clip above doesn’t show the questionable dropback that gave Smith the lead in the first place, but what it does make clear is that the No. 4 Kyle Busch Motorsports Toyota was clearly the faster of the two. Even after falling behind, Nemechek could very easily have executed a classic Bristol bump-and-run on his teammate and cruised to his sixth win of the season. Instead, he comfortably drove to a third-place finish, already locked into the Round of 8.

Is it possible there were team orders at play here? It certainly looked like it and even Creed indicated he thought that was the case.

Hey @KyleBusch asking for a friend. Is @JHNemechek going to get a cut of that winnings check ??

Let’s be clear. Smith had an incredible restart that put him in a position to be aggressive and make that contact with Creed to give himself a chance. It was probably the most impressive restart of the rookie’s career at a time when the pressure was at its highest. There’s zero question about that.

But when Nemechek made the three-wide pass out front, it looked like he was ready to sail right off to victory lane, leaving Smith on the outside looking in for the next round. Instead, he drove was what essentially the worst corner of his incredible 2021 season and sailed to the high side of the track, opening up the bottom groove for Smith to drive by. Considering the timing, I’m not convinced it wasn’t just a ploy to put two KBM trucks in the Round of 8.

And maybe Nemechek truly did just get loose as he raced hard for the win. But at the point when he wiggled and slid up the track, he already had the lead and there was no visible contact between him and Smith. So what caused the issue? He didn’t just run out of the same talent that’s put him in position to sail his way through the playoffs and in strong position for the Championship 4. That, I’m 100% sure of. But if you’re to believe Nemechek, he simply got loose, as told to Fox Sports’ Bob Pockrass.

“I’m pissed right now. Two teammates racing hard … Whatever. You get moved out of the way. Kind of a cheap shot. It’s a company win. It is what it is.”- John Hunter Nemechek when I asked him what would he say if people viewed the Bristol finish as he let Chandler Smith win. pic.twitter.com/1iJmus5agU

I’m a bit bothered here by how little emotion is shown by Nemechek. He claims he’s “pissed off” at the suggestion of team orders but just looks very calm during the interview. That’s not the same passionate, emotion-filled driver I’m used to.

We all know there will never be a confirmation as to whether there was a conversation somewhere around KBM about working together to keep both trucks in the playoffs. Only a small handful of people likely have that answer, and they’ve seen previously what happens if NASCAR gets wind of manipulating a race to keep a driver in championship contention.

Maybe my gut feeling is completely off base, but something just doesn’t feel right about how those last five laps played out.

With all that said, there’s another aspect we need to consider here. Creed got a taste of just how hard the KBM teammates in Nemechek and Smith intend to race him when their title hopes are on the line. That in itself is likely to change the give and take between the trio on the track in these final four races, especially if it comes down to a race win or making the Championship 4.

In the end, all of this conflict may be for nothing if all three drivers don’t put themselves in position to advance. If they do? It’ll be something to pay attention to in the coming weeks as the pressure to make the championship race ramps up.

I really don’t think John Henry or anyone at KBM care if your convinced or not. That race was a week ago, what news tidbit have you dug up this week !

Much ado about nothing.