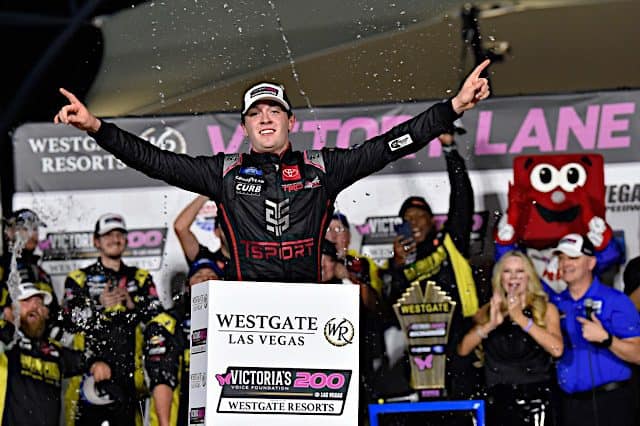 A late spin from Carson Hocevar set up a five-lap shootout to the finish where Eckes outdueled Todd Gilliland on the final restart to score the victory. ThorSport Racing drivers Matt Crafton and Johnny Sauter finished third and fourth, respectively, marking the first-ever 1-2-3-4 finish for a single team in Truck Series history. Gilliland, who had led a race-high 66 laps, was the highest finishing non-ThorSport truck in fifth.

In the final two laps, Rhodes hounded Eckes for the lead, but a caution for Tyler Hill on the final lap sealed the victory for Eckes with two turns remaining.

“You can look at my Racing-Reference and see how bad it is and how tough it is,” Eckes said in his interview at the finish line. “Damn, this is big. It’s been a tough year.”

“That’s pretty much all I can say, it’s been a tough year since last November. Hopefully, I proved I can still do this.”

At sunset, the race began with John Hunter Nemechek leading from the pole. Gilliland showed his hand early, as he quickly picked his way through the field and found himself in second place behind Nemechek as the laps wound down in stage one. Despite getting close to him several times, Nemechek held off Gilliland en route to a stage one win.

In the pit stops during the stage one break, Gilliland was able to leapfrog Nemechek on the scoring pylon and took the lead after Nemechek had been out front for the first 33 laps. Despite occasional challenges from Rhodes and Stewart Friesen, Gilliland cruised to the win in stage two.

During the stage two break, Hocevar, Austin Hill, and Tanner Gray stayed out, while Gilliland and the other leaders pitted for four tires. Hill took the lead away from Hocevar on the ensuing restart, and Gilliland with four fresh tires sliced his way through the field like butter, retaking the lead on lap 86. Gilliland then led during the longest green-flag run of the night and began to distance himself from the rest of the field until a crash between Drew Dollar and Jack Wood with 19 laps to go reset the running order. During the penultimate caution, Sauter elected to stay out while everyone else on the lead lap pitted for tires. Gilliland made quick work of Sauter when the race resumed and was poised to win his third career Truck Series race until the aforementioned spin by Hocevar set up the final restart where Eckes took the top spot and never relinquish it for the remaining four laps.

It was an attrition-filled race, and the playoff drivers were not immune to the struggles. Of the eight playoff drivers in the field, five of them finished outside the top 20.

Zane Smith suffered a flat tire from contact, with the resulting damage ripping out the battery. Despite the contact that cut the tire, NASCAR deemed the problem mechanical, rather than crash-related, allowing the team time to work on repairs without facing the Damaged Vehicle Policy time clock. Smith ended up finishing 19 laps down in 29th.

Meanwhile, Nemechek, who entered the Round of 8 with a 44-point cushion over the cut line, struggled with engine problems all night, and his truck stalled on track twice throughout the course of the race. Nemechek returned to the race to finish 49 laps down in 33rd.

Chandler Smith and Sheldon Creed endured a horrendous crash on lap 71 that was triggered by Tyler Ankrum spinning in turn 2. Smith made contact with Ankrum as he went up the track, and in an effort to avoid the crash, Creed went back into the throttle near the infield wall at the exit of the turn. It was there where Creed met Smith, and the resulting collision sent Smith’s truck flying into the air and caused Creed’s truck to burst into flames. Fortunately, both drivers were able to walk away from the crash uninjured.

Finally, after having a solid race and leading eight laps, Hocevar spun at the entrance of pit road as he attempted to make an unscheduled pit stop for a vibration inside 10 laps remaining. NASCAR deemed that the spin was intentional and held him on pit road for a lap, setting up the finish where Eckes scored his first career win and ThorSport capped off a historic night.

The 2021 Camping World Truck Series playoffs will continue next weekend at Talladega Superspeedway, as the Chevy Silverado 250 will take place on Oct. 2 at 1 p.m. ET, with TV coverage provided by FOX.

Has anyone ever done less than Drew Dollar in the 51? I don’t care how much money your daddy has. ARCA is the summit for that kid.

Eckes undoing his driving uniform for his victory interview is a major faux pas.