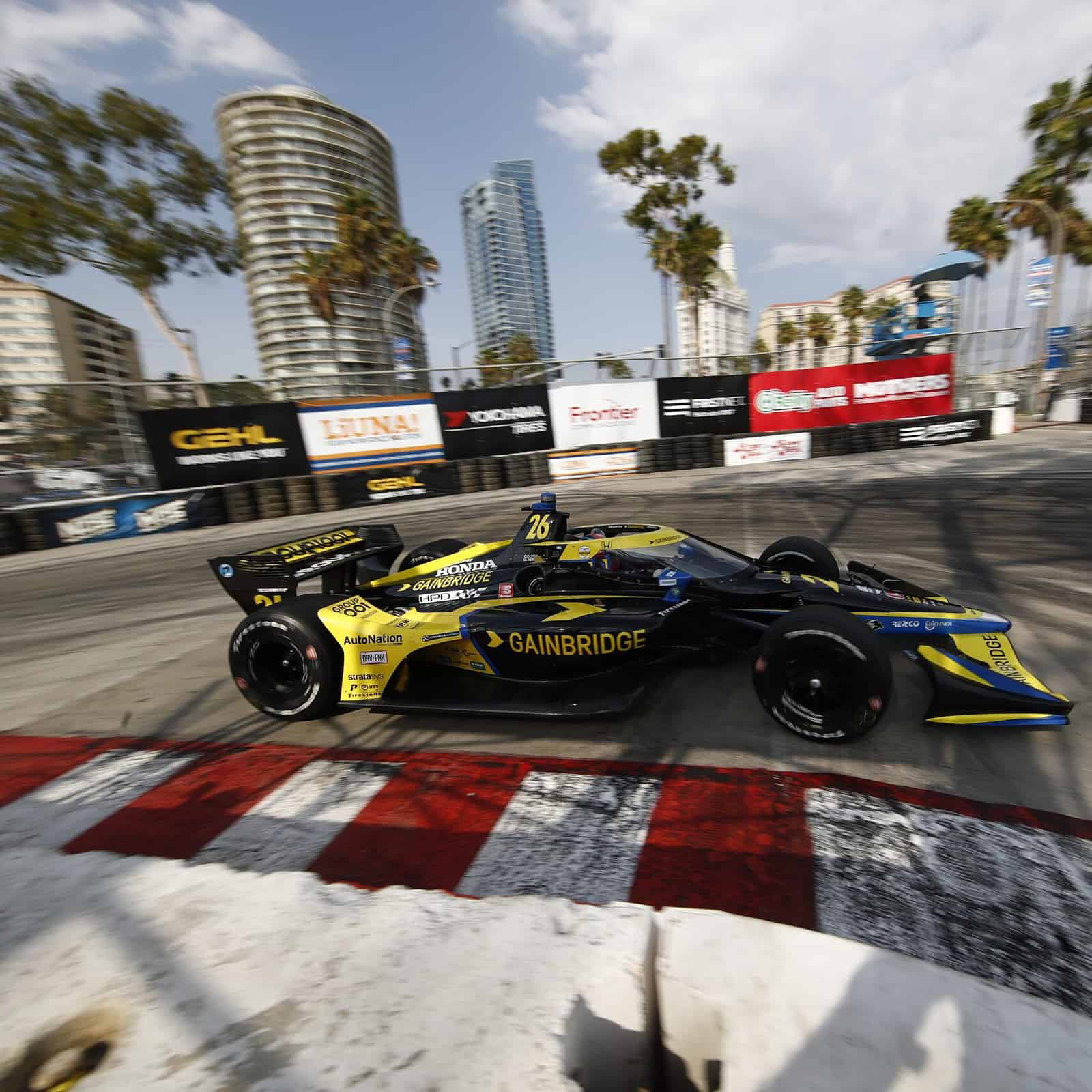 LONG BEACH, CA — Colton Herta’s bid to win two NTT IndyCar Series races in a row got off to a good start by setting the fastest lap time in the opening practice session for the 2021 Acura Grand Prix of Long Beach.

The 45-minute session was marred by a few red flags for single-car incidents. Josef Newgarden brought the first red flag of the session as he locked up his brakes going to turn nine, spinning and having light contact with the tire barrier then stalling his No. 2 Team Penske Chevrolet. Newgarden made his way back to the pits after getting restarted by the safety team and spent five minutes in his pit box for causing a red flag in practice.

Six minutes after the green flag came out, the red came out again for Oliver Askew’s No. 45 Rahal Letterman Lanigan Racing Honda. The Floridian hit the turn one wall with the right side of the car on corner exit, then forced to a stop later in the lap with right rear suspension damage. His session ended prematurely with the 26th best time out of 28 cars.

The green flag flew again with six minutes to go in the session and nobody could top Herta’s lap.

Palou is racing at Long Beach for the first time, and finishing third in practice is a strong way to start the weekend for the No. 10 Chip Ganassi Racing Honda. Palou did many laps of the circuit on iRacing to help prepare him for this weekend.

“It was a bit bumpier than I thought, a bit less grippy than I thought,” Palou said in the post-practice press conference. “But it’s really fun, to be honest. I really like it. The track really flows. You can connect one corner to the other that you don’t really get those corners in another street courses. So, yeah, I would say it’s one of my favorite street courses that we’ve been to.”

Meanwhile, championship contender Pato O’Ward did not have the best of sessions, as the No. 5 Arrow McLaren SP Chevrolet managed to turn only the 16th best time in the session. O’Ward is second in IndyCar points, 35 behind Palou.

“It’s hard to say where we’re at,” O’Ward said in the post-practice press conference. “The car didn’t feel the best. I’d be lying if I said it did. So we need to find what is wrong with it I guess and trying to go into a direction that’s going to help us for qualifying. I think qualifying here is going to be everything.

“But, yeah, just really messy. Car was all over the place.”

The second practice session for Sunday’s (September 26th) race is at noon ET on Peacock streaming with qualifying at 3:05 p.m. ET on NBCSN and Peacock. The 85-lap race will be on NBCSN with a 3:45 p.m. ET green flag.