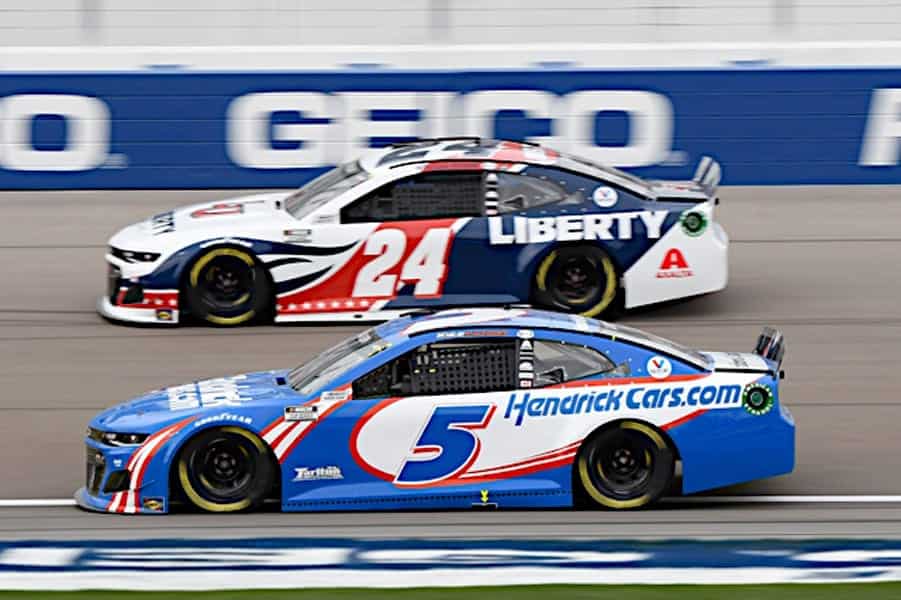 The NASCAR Cup Series heads out west to Las Vegas Motor Speedway for the South Point 400, airing on Sunday, Sept. 26 at 7 p.m. ET on NBC Sports Network. Which drivers’ gambles will pay off in your daily fantasy NASCAR DraftKings contests? Read on and find out!

Twelve drivers have made it through to the next round of the playoffs and they all begin Sunday’s race in the front of the field, starting with pole sitter Kyle Larson. This Round of 12 couldn’t be more diverse (except maybe if Pocono Raceway were in the playoffs). First up is the cookie-cutter 1.5-mile racetrack in Vegas. Next week drivers take on the 2.66-mile Talladega Superspeedway, followed by the Charlotte Motor Speedway ROVAL.

For now, let’s focus on Las Vegas. We’ve already seen this track this year, though it was several months ago in the spring. Larson won that event, setting off his stellar season for the No. 5 Hendrick Motorsports team.

Vegas was the second of six 1.5-mile tracks so far in 2021, so we can look at all of these events to see which drivers tend to perform well there. However, keep in mind that one was at Homestead-Miami Speedway, which is more of an oval shape, and two were at Atlanta Motor Speedway’s quad-oval. Both of these tracks had high tire wear and may be a bit more of an outlier compared to this track.

As always, study each driver’s history at LVMS to help you know which ones could earn the most fantasy points. I would start with the one who tends to lead laps more often (especially this season) and build around that. Some lower-priced drivers could provide some good value to help you fit in the more expensive ones.

Before I share with you some of my picks for Vegas, let’s go over the results from Bristol Motor Speedway last week.

The biggest issue in this lineup was Kyle Busch, who finished 21st after cutting a tire late in the race. Of course, Daniel Suarez didn’t help matters much either, struggling through a wreck of his own by the end of the evening. In another lineup, I had swapped Busch and Ryan Preece for Kevin Harvick and Matt DiBenedetto, and the score was much higher (347.75).

By the way, there’s a free $5,000 pool on DraftKings that you can enter by 7 p.m. ET on Sunday. All you have to do is answer questions about the drivers and which manufacturer will win this weekend. On the Android app you can find it on the home page (just tap free pools). If you are on the computer, click here. It is also in the pools section of DraftKings Sportsbook.

It’s just silly at this point what Larson has been able to do this season. He has a 7.5 average finish across the six 1.5-mile courses, second-best to Busch. He flat-out dominated at Vegas in March with 103 laps led and 57 fastest laps. He almost won Atlanta in the spring and led over 250 circuits there. Additionally, he was out front for 132 laps at Kansas Speedway before a couple of late cautions threw a wrench in his plan to win. Lastly, at Charlotte Motor Speedway, the No. 5 car stayed out front in May for over three-quarters of the 600-mile race.

Prior to this season, Larson only led 26 total laps at Vegas. However, he has seven top-10 finishes, including two second-place results in 2017 and 2018. But his stats from this year make him the favorite to win. Lock him in your lineup.

I know Byron’s average finish at LVMS isn’t great, as he’s finished 16th or worse in most races in Sin City. However, he did gain seven positions in the fall 2019 event to finish seventh. Also, he led 25 laps earlier this spring en route to eighth place.

Although the No. 24 Hendrick pilot struggled often at Las Vegas, he seems to have turned things around this year at intermediate tracks. For one, he earned his second career victory at Homestead after leading 102 laps. Also, Byron notched 51 fastest laps in the Coca-Cola 600 before ultimately ending in fourth place. He’s finished eighth on average at the 1.5-mile courses and was second to Ryan Blaney at Michigan International Speedway in August. Even though he’s starting third, Byron should tack on several bonus points on DraftKings to help you win your contests.

DiBenedetto is a little bit pricey for his starting position of 14th but should still nab a good result this week. At Vegas, his two top fives came in 2020 when he began 19th and ended runner-up in each event. Though he didn’t finish as high there this year, he did gain 14 positions to end in 16th.

DiBenedetto has also done well at the other intermediate ovals thus far, earning an 11th and ninth at Atlanta in the spring and summer, respectively. Additionally, he snagged a fourth place at Kansas and a sixth at the 2-mile Michigan track. A good result this week would bolster his shot of obtaining another ride for next year, as Harrison Burton will take over the No. 21 Wood Brothers Racing Ford in 2022.

I’m rolling the dice on Suarez because of his salary and potential to advance his starting position of 26th. At Homestead, he gained six spots to end 15th, while at Kansas he was 11th after starting 21st. And at Pocono Raceway he was 13th and 15th in each race of the doubleheader, respectively.

Unfortunately, most of his career in Vegas, Suarez hasn’t moved up during the race. However, he did earn an eighth-place finish in the fall 2018 event during his tenure with Joe Gibbs Racing. I don’t think he’ll do that again this week with Trackhouse Racing Team, but he should still finish in the teens.

Buescher, on the other hand, has done well both at Las Vegas and on the 1.5-milers. He’s finished 18th or better in each Vegas event since 2018 (seven races). Last fall, he advanced seven positions and brought home ninth place, while this year, he wound up 14th.

The No. 17 Roush Fenway Racing driver has finished 12th on average at tracks of the same length, including a seventh in the spring Atlanta event and an eighth at Charlotte and Kansas. Also, in February he led 57 laps at Homestead, though he struggled later in the race and ended the day a distant 19th. Overall, though, because of these good finishes, you should consider Buescher in your DraftKings lineups.

I had a rough time choosing between Wallace and Ricky Stenhouse Jr. but ultimately decided on the No. 23 Toyota of 23XI Racing. Wallace has finished most of his Vegas races in the 20s, but he did bring home a sixth-place finish last spring. However, I’m mainly playing him because of his results at several 1.5-mile courses.

Wallace was 16th and 14th in the March and July Atlanta events, respectively, gaining 10 positions in the latter race. Also, in the Coca-Cola 600, he improved by four positions to end up 14th. His DraftKings salary is pretty low and would allow you to fit two or three higher-priced drivers in your roster.