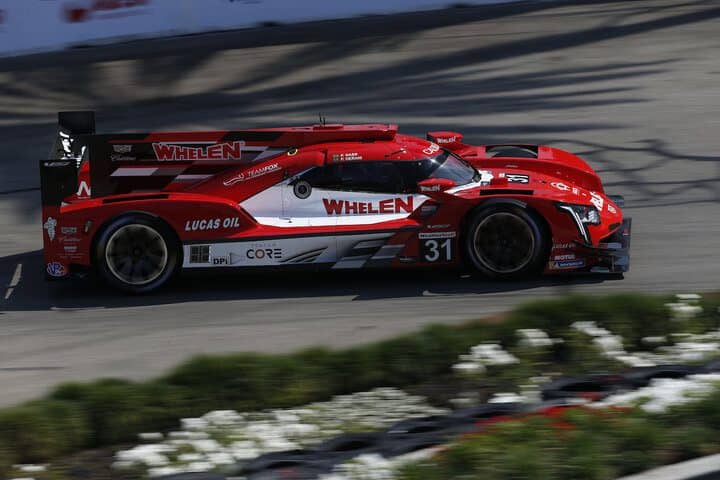 Long Beach has tended to favor the Cadillac DPi-V.R.s during the DPi era in IMSA.  Friday (Sept. 24) was no exception as Action Express Racing’s Felipe Nasr was fastest overall in both sessions.  His afternoon session lap at 98.423 mph was the best lap of the day.

In the opening practice session, Nasr was fastest overall with a lap at 96.394 mph in his Cadillac.  The lap was nearly five-sixths of a second faster than the similar Cadillac of Chip Ganassi Racing’s Renger van der Zande.  Meyer Shank Racing with Curb-Agajanian’s Olivier Pla was third in the best of the Acuras, followed by JDC-Miller MotorSports’ Tristan Vautier.  Wayne Taylor Racing’s Filipe Albuquerque was fifth quickest.

The session was ultimately run in a start-and-stop fashion with three red flags slowing the action.  The first of these interruptions happened nine minutes into the session when Mazda Motorsports’ Oliver Jarvis stopped on track in turn 10.  Jarvis’ Mazda was retrieved, but did not return to the track.  The No. 55 Mazda was the only team to not record a time during the session.

Later on, The Heart of Racing’s Alex Riberas spun the No. 27 Aston Martin in turn 9 to bring out another yellow.  He did not return to the track afterwards.

Finally, the session was red-flagged with 14 minutes remaining and did not resume after Pla crashed the No. 60 Acura in turn 10.  The session was officially called off three minutes prior to the scheduled completion.

In GT Le Mans, Corvette Racing’s C8.Rs were once again fastest.  Nick Tandy was quickest with a lap at 88.855 mph, good for sixth overall.  Tandy’s lap was seven-hundredths of a second faster than teammate Antonio Garcia.  WeatherTech Racing’s Mathieu Jaminet was third.

Wright Motorsports’ Patrick Long was fastest in GT Daytona in his Porsche with a lap at 87.962 mph.  Long’s lap was one-sixth of a second faster than the Lamborghini of Paul Miller Racing’s Bryan Sellers.  Turner Motorsport’s Bill Auberlen was third, then GRT Grasser Racing Team’s Franck Perera and Vasser Sullivan’s Jack Hawksworth in the fastest of the Lexuses.

In regards to Perera, he does have one previous start at Long Beach.  He drove in the final race for the Champ Car World Series in 2008, held as part of the IndyCar Series schedule that year after the Champ Car/IRL merger.  Driving for Conquest Racing, Perera started third and finished sixth.

In the 75-minute afternoon session, Nasr’s quick lap came in the closing minutes of the session after trading quick times with JDC-Miller MotorSports teammates Vautier and Loic Duval.  Nasr’s lap was one-sixth of a second faster than Duval.  Kevin Magnussen was third in the Ganassi Cadillac, followed by Albuquerque and Jarvis.

The Shank No. 60 did make it back out on track after the crash in Practice No. 1, but they were very limited in their on-track activity.  The team didn’t set an official time until the final 15 minutes of the session.  Ultimately, Dane Cameron only got a few laps at speed.  Then, Cameron spun the car and stalled it in the runoff at turn 8 (the intersection of Pine Avenue and Seaside Way).  He then stalled it, triggering a red flag that ended the session a minute early.

Garcia was fastest in GT Le Mans with a lap at 91.398 mph.  This lap was a half-second faster than Tommy Milner in the No. 4 Corvette, while Jaminet was a full second back in third.

Long was quickest once again in GT Daytona with a lap at 88.462 mph.  The lap was three-hundredths of a second faster than PFAFF Motorsports’ Zacharie Robichon.  Sellers was third quickest, then Turner Motorsport’s Robby Foley and Vasser Sullivan’s Aaron Telitz.  The top five drivers are separated by less than a tenth of a second.

Other than the last-minute red flag, the second session was much cleaner in terms of contact.  However, there were many more trips into the runoff as drivers tried to push things a little more with additional rubber being laid down.  No less than 10 drivers missed turns and had to turn around during the session.

Qualifying for the IMSA WeatherTech SportsCar Championship Acura Grand Prix of Long Beach is scheduled to start at 7:50 p.m. ET.  The sessions will be streamed live at both IMSA.com and on NBC Sports’ TrackPass service.