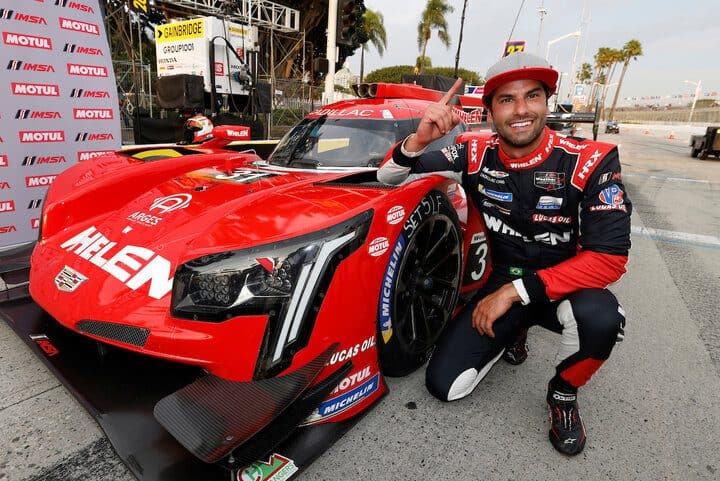 Action Express Racing’s Felipe Nasr continued his strong form from practice Friday (Sept. 24) by snagging the pole for Saturday’s IMSA WeatherTech SportsCar Championship Acura Grand Prix of Long Beach with a lap at 98.922 mph.  It is Nasr’s second pole of the year.

“It feels amazing whenever you get pole position,” Nasr said after the session.  “I love street racing. We worked hard every session on getting the car set up right.  I came to the mentality here that we had to maximize the points and that was counting on qualifying and grabbing pole.  So, I feel so happy for the whole team achieving that and nailing that lap when it mattered.  We always know qualifying always comes to those last few minutes where cars, trying to find the limits, cars can go off and so on.  But we put up a lap in the bag and here we are, pole position in Long Beach.”

The session came to an early end due to an incident in turn 9.  Mazda Motorsports’ Oliver Jarvis slid wide at turn 9 and nosed into the tires to bring out the red flag with a little more than two minutes to go.  Jarvis’ Mazda RT24-P was not hurt too badly, but it simply took too long to move the car.  By IMSA rules, Jarvis loses his two best laps for bringing out the red flag.  However, that doesn’t hurt him at all since his best lap was still at the back of the DPi class.

Jordan Taylor dominated GT Le Mans qualifying in the No. 3 Chevrolet Corvette C8.R.  Taylor set a lap at 92.249 mph to win the class pole.  It is not a track record as teammate Nick Tandy qualified a Porsche a half-second quicker for this race in 2019.

During the points portion of GT Daytona qualifying, PFAFF Motorsports’ Laurens Vanthoor and Paul Miller Racing’s Bryan Sellers battled at the top of the chart for much of the session.  Vanthoor was able to claim the fastest lap in the session with a lap at 89.730 mph, a new track record for the GT Daytona class.  That earned him and Robichon 35 points towards the championship.  It didn’t come easy as Vanthoor did rub the outside wall exiting turn 8 during the session, knocking the left side mirror loose.  It managed to hold on by a wire.

Vanthoor’s lap was one-seventh of a second faster than Sellers.  Vasser Sullivan’s Jack Hawksworth was third, then Turner Motorsport’s Bill Auberlen in the sole BMW.  The Heart of Racing’s Ross Gunn was fifth.

Like the DPi qualifying session, on-track action was curtailed with three minutes remaining when The Heart of Racing’s Alex Riberas spun in turn 8 and grazed the wall.  He then tried to rejoin and blocked the track, nearly putting Wright Motorsports’ Patrick Long into the inside wall.  Both drivers were able to drive away, but the red flag had already been put out.  There was too little time remaining to restart the session since Riberas did put some debris down on track, so the checkered flag was flown early.  Like Jarvis, Riberas lost his two best laps.  That dropped him from 10th to 11th.

In GT Daytona, the session was once again split into position and point sessions.  Regardless of the session, getting clean air was critical.

Turner Motorsport’s Robby Foley was the first driver out of the pit lane at the beginning of the session.  That gave him the crucial clean air.  Not having to wait for others allowed him to put down quick times as fast as possible.

While Foley was in front early and often, Paul Miller Racing’s Madison Snow and PFAFF Motorsports’ Zacharie Robichon were right on his tail.  Snow was able to turn in a lap at 89.145 mph with just a minute remaining to claim the class.

Snow’s lap was one-eighth of a second faster than Foley.  CarBahn Motorsports with Peregrine Racing’s Richard Heistand will start third in his Audi, followed by Robichon.  Daniel Mancinelli, who will make his IMSA WeatherTech SportsCar Championship debut this weekend in a Ferrari for Scuderia Corsa, will start fifth.

Much like in practice, there were some off-course excursions.  Rob Ferriol went off-course at turn 6.  At the same time, Mancinelli hit a bump under braking for turn 9 and ended up in the runoff.  Neither driver hit anything.  GMG Racing’s Kyle Washington, who is making his IMSA WeatherTech SportsCar Championship debut this weekend with the organization he runs in SRO America’s GT America Powered by AWS for, made contact with the concrete exiting turn 9.  Washington was able to drive away.