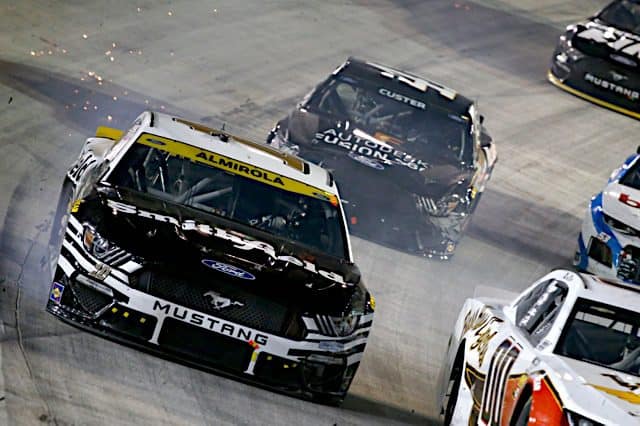 The big topic coming out of NASCAR’s weekend at Bristol Motor Speedway was the feud between NASCAR Cup Series championship contenders Kevin Harvick and Chase Elliott.

If Elliott’s tire didn’t go down, wouldn’t it have been fun to try to watch him catch back up to Harvick and exact payback while racing for the win?

It’s not anything specific about Elliott’s fenders that led to this blown tire, though. The current bodies on the Cup cars are designed in a way so that just the teensiest bit of contact between two cars or a car and the wall causes the fenders to rub and destroy the tires.

In fact, the Bristol Cup race Sept. 18 had several playoff contenders fall victim to cut tires. Denny Hamlin had one of the fastest cars, finishing in the top two in the first two stages. But we lost a major player for the win when Hamlin’s right front ever so slightly made contact with Kyle Larson‘s left rear. The next corner, the No. 11 went straight into the outside wall.

Saturday night’s race was awesome. But wouldn’t it have been a tad more awesome had there been Hamlin and Elliott dicing it up with Larson and Harvick for the win as well?

Hamlin’s flat didn’t affect the playoffs, but soon after, flats by his Joe Gibbs Racing teammates Christopher Bell and Kyle Busch nearly led to both drivers missing out on the Round of 12. Had Bell and Busch not built up such a great points buffer through the regular season and first two playoff races, they would surely be out.

Kurt Busch, on the other hand, did miss out on the Round of 12 because of a flat tire. His No. 1 Chevy’s left rear tire exploded the week before at Richmond Raceway, causing the driver’s side of the car to slam into the outside wall.

Most importantly, I’m just glad Kurt Busch was OK after that brutal hit. It looked eerily similar to Jerry Nadeau’s career-ending wreck at Richmond in spring 2003, my first race weekend in attendance. So Kurt Busch escaping that crash without injury is a testament to how far NASCAR safety has advanced since then.

Kurt Busch had a fantastic car at Richmond, though. He was running second at the time of the competition caution and won the race off of pit road.

But something happened between the time the No. 1 team changed tires and the race restarted. Many observers noticed the Goodyear lettering was already rubbed off the left rear tire before the green flag came back out. So there was, as I’ve said with Elliott and Hamlin at Bristol, just the slightest contact with something that eventually cut down the No. 1’s tire.

Kurt Busch missed the Round of 12 by six points. Let’s say a tiny bit of contact doesn’t cut down tires and he finishes all three stages of the race in fifth places — that’s 44 points compared to the one point he received for being credited with last place.

So the tires going down too easily is impacting the playoffs way too much. And racing through the rest of the playoffs will suffer as a result. Playoff drivers aren’t going to try to make super-aggressive passes because the risk vs. reward just doesn’t add up.

The wheel openings being so small and the fenders and quarter-panels being so close to the tires is a big proponent of these tire problems. Back in the early 2000s, the wheel openings were larger, which allowed for cars to beat and bang without the fear of a tire going down as easily.

That’s why Kurt Busch and Ricky Craven were able to put on such a good show at Darlington Raceway in 2003 for the greatest finish ever. They both would’ve had flat tires and Dave Blaney would’ve won with today’s Cup bodies.\\

Why do you think the racing at Bristol and Richmond was so insane back in that era?

Richmond became known as the Action Track because cars could rub on each other with reckless abandon. Now, drivers try not to rub against another car there because they know the slightest touch could end their or the other driver’s day. And Richmond’s such a wide track that drivers can mind their own business for the most part and not push the issue. As a result, some fans now claim the racing there is boring and the track just lost its spot in the playoffs.

The only reason Bristol and Martinsville Speedway both still have beating and banging is because they’re both so much shorter and narrower than Richmond. The cars are essentially forced on top of each other at those two tracks.

Meanwhile, the NASCAR Xfinity Series now uses composite bodies that have a lot more give than the Cup cars, and look at their races the last two weeks at Richmond and Bristol. The Richmond Xfinity race had phenomenal racing. In the middle of the pack, Dale Earnhardt Jr. was basically going to war with everybody. Neither he nor Josh Williams had flat tires after their rubbing.

In the Bristol Xfinity race, cars were slamming into each other repetitively over the final laps. Had Austin Cindric, AJ Allmendinger and Justin Allgaier been driving with the Cup bodies instead of the Xfinity bodies, all three would’ve had flat tires way before the checkered flag and there wouldn’t have been that spectacular finish.

With just seven races left with the current generation of Cup car, nothing about the tire openings or the tires themselves is going to change. But my hope is that the Next Gen car will provide bodies that won’t create a tire rub if one car breathes on another. If NASCAR can avoid this problem this time, the racing product will improve dramatically.

I guess we’ll find out right away at the Los Angeles Memorial Coliseum.

Oh lord. This has to be the worst ever article I’ve read here. You reiterate the “tire failure” argument repetitively. First, if you knew anything about “ride heights” in the Cup cars, you’d understand that THAT is why they cut tires down–because the cars are so low against the tires and ground versus the same old tiring argument that slight contact kills them. Of course it does, it’s called racing, not F-1 with manscaped drivers that can’t handle contact. My first race, in attendance, was Talledaga (fall) in 1988–I’ve been watching the sport longer than you’ve even watched the racing. Although I do applaud the composite bodies of the Xfinity series–taking all the variables out for mechanical issues makes for a boring race…this is NASCAR, not the IROC series.

1st race in attendance, 1964 Indy 500 won by A.J. Foyt. But I don’t cut people down because I’ve been watching longer or “think” I know more about racing than them. I drove a beetle all night to get there for the race.

The times they are a-changin’……STILL!

I know that I’m out of step with the vast majority of fans. That old saw that “rubbing is racing,” sets my teeth on edge. I’ve formed my opinion over the course of over 60 years being in & around racing. As well as having to hit my hip to repair damaged cars. Not from a third rate movie. A classic example of what I want to see, was Martin Truex setting up Logano for several laps before making a clean pass in the playoffs a few years ago. Then Logano comes back the next lap, nails Martin, knocks him out of the way & takes the win. Same as Dillon ramming Almorola to win the Daytona 500. As well as the way Earnhardt Sr. used to race. It takes no real skill, only a “win at any cost” attitude. A key element to winning cleanly, is taking care of your equipment, & tires are an important part of that. I’m sure that this will get a lot more dislikes than likes, & I understand that. This is just my take.

The headline should be “Fenders Cutting Tires.”