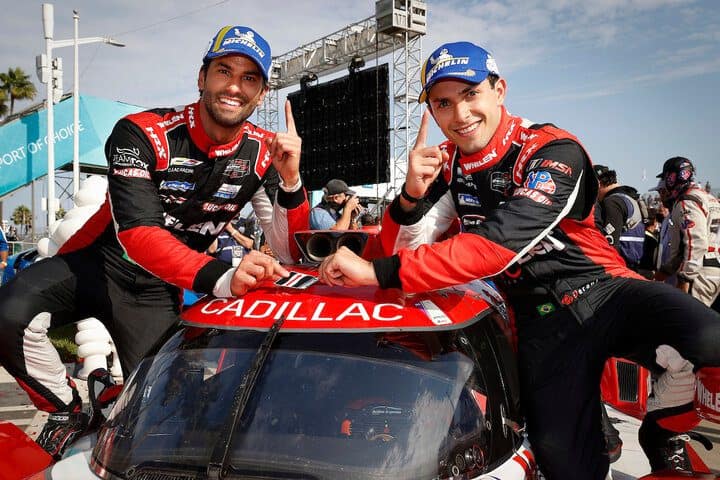 Action Express Racing’s Pipo Derani and Felipe Nasr capped off a weekend sweep Saturday (Sept. 25) in Long Beach.  The duo were fastest in both practices, won the pole, then led 73 of 78 laps to win the IMSA WeatherTech SportsCar Championship Acura Grand Prix of Long Beach.

“It was a clean sweep,” Nasr said after the race.  “We dominated every session.  We put the car on the pole, which was 50 percent of the job done.  We maximized our point chances and got the win.  It was an amazing race.  We did everything we could to keep the car in front.  Fuel savings dictated most of my stint, but I was able to hand it over to Pipo [Derani] with a comfortable lead.  I’m proud of the whole No. 31 Whelen Engineering/Action Express [Racing] crew.  They did an amazing job giving us a fast car and here we are [in victory lane].  We got every point we could and now we’re in the fight for the last race.”

Nasr started from the pole and attempted to get away early, but the man on the move at the start was Wayne Taylor Racing’s Filipe Albuquerque.  Albuquerque started in fifth, but went to the outside at the start-finish line.  A good start allowed Albuquerque to sweep past both JDC-Miller MotorSports’ Loic Duval and Meyer Shank Racing with Curb-Agajanian’s Dane Cameron into third.

At turn 1, Albuquerque tried to go to the inside of Chip Ganassi Racing’s Kevin Magnussen for second.  The two had contact multiple times, resulting in a small bit of debris coming off of the Acura.  Magnussen was able to maintain his position despite all the contact.

Magnussen was most definitely the main threat to Action Express Racing early on.  10 minutes into the race, Nasr got stuck behind Magnus with Archangel’s John Potter entering the Fountain Complex.  That allowed Magnussen to sweep past to take the overall lead.  That advantage was short-lived.

Less than two laps later, Magnussen and Nasr encountered more slower traffic from the GT Daytona class.  Magnussen swept past Matt McMurry and Steven Aghakhani, but went too deep into turn 1.  The mistake resulted in Magnussen grazing the tire barrier.  Nasr was able to drive back past into the overall lead.  Magnussen was able to continue, but his Cadillac suffered front and rear damage from the contact.  The tire bundle saved Magnussen from more significant damage, but it did shear some debris off of the car, which led to the race’s only full course caution.

That caution came 13 minutes into the race, meaning that it was early enough that the pits would not open.  With no more cautions for the rest of the race, Magnussen and Renger van der Zande were forced to deal with a damaged car from this point forward.

With Magnussen dealing with damage, Nasr was able to pull away to a comfortable lead of nearly eight seconds.  His only worries here was lapped traffic and whether he could save enough fuel to make it to halfway, thus guaranteeing a one-stop race.  Meanwhile, Albuquerque dropped back as the tires wore significantly on his Acura.

Nasr did make it to halfway with some fuel saving before handing over to Derani.  Derani was able to hold his advantage steady with the margin fluctuating with lapped traffic.

In the closing minutes of the race, Olivier Pla spun the Meyer Shank Racing Acura and hit the wall at the end of Shoreline Drive after contact with Corvette Racing’s Antonio Garcia and Scuderia Corsa’s Colin Braun.  Pla was able to drive away, but the crash ended a terrible weekend for the Ohio-based.

Derani was able to easily hold on for the victory.  The margin of victory was 10.952 seconds over Magnussen and van der Zande.  Duval and Tristan Vautier were third, completing a Cadillac podium sweep.  Albuquerque and Ricky Taylor were fourth, dropping their points lead down to 19 points with one race remaining.  Mazda Motorsports’ Oliver Jarvis and Harry Tincknell were fifth.

GT Le Mans was a Corvette Racing benefit.  Jordan Taylor led early from the pole, but Tommy Milner was never far behind.  The teammates ran nose-to-tail until Milner was able to make the move for the lead 50 minutes into the race.

After the pit stops, Nick Tandy had Garcia within striking distance for the remainder of the race, but Garcia could not prevent the silver No. 4 from taking the class victory.

Milner and Tandy’s margin of victory was three-quarters of a second over Jordan Taylor and Garcia.  WeatherTech Racing’s Mathieu Jaminet and Cooper MacNeil were third in their Porsche.

In GT Daytona, Paul Miller Racing had a dominant day.  Madison Snow led the 17-strong contingent to green and slowly pulled away from the pack.  Meanwhile, points leader Robby Foley ran into immediate trouble.  Foley hit debris in the opening laps of the race, which resulting in the ABS system failing.  At a track like Long Beach, such a system is critical.

After the early yellow, Foley was still running second, but under pressure from CarBahn Motorsports with Peregrine Racing’s Richard Heistand.  Heistand made a move to the inside at turn 8 for second.  No contact was made, but Foley was pushed wide and ultimately nosed into the tires.  The crash dropped Foley from second to 11th.  It ended up being just one issue for the team.  The braking issues never improved and a penalty for putting crewmembers under the car without jack stands dropped Foley and Bill Auberlen to a 16th-place finish in class.

While Heistand was able to get to second, he was off of Snow’s pace and holding up the pack.  That allowed Snow to pull out a seven-second lead over a five-way battle for second that was eventually taken by PFAFF Motorsports’ Zacharie Robichon.  Aaron Telitz was able to move his No. 14 Lexus up into contention.

Once the driver changes were made, Bryan Sellers continued to pull away from the pack.  Meanwhile, Vasser Sullivan’s Jack Hawksworth was able to move into second.  Despite one of the fastest drivers in the class being in play, no one could prevent Paul Miller Racing from taking their first win of the year.

Sellers had a lead as big as 14 seconds at one point, but the official margin of victory was 11.080 seconds over Robichon and Laurens Vanthoor.  Wright Motorsports’ Trent Hindman and Patrick Long ended up third in their Porsche while Hawksworth and Telitz faded to fourth.  Heistand and Jeff Westphal ended up fifth.

From here, there is a split schedule going forward.  The GT Le Mans and GT Daytona classes will be back in action in two weeks at VIRginia International Raceway for the Michelin GT Challenge at VIR.  That race will be Oct. 9 at Noon on NBC.  The DPi teams have only the Motul Petit Le Mans remaining on the schedule at Michelin Raceway Road Atlanta.  That race is scheduled for Nov. 13 at Noon ET.  Coverage of that race will be split between NBC and NBCSN.  Frontstretch will be on-site at both race weekends to bring you coverage.