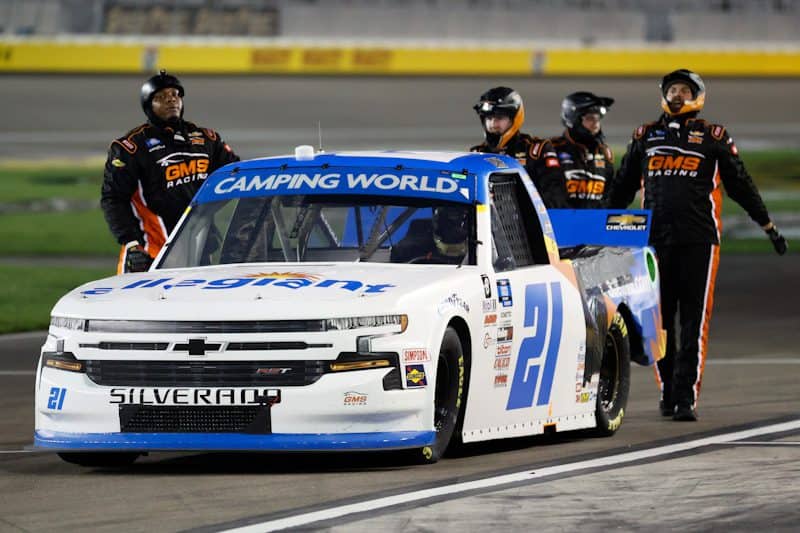 It took some time for chaos to strike the NASCAR Camping World Truck Series’ Victoria’s Voice Foundation 200 at Las Vegas Motor Speedway, but once one playoff driver was involved in a crash, the dominoes kept falling. A whopping five of the eight championship competitors had issues, ended up sideways or wound up crashed on Friday (Sept. 24) night in Sin City.

Most notably, a lap 71 crash featured postseason contenders Sheldon Creed and Chandler Smith colliding on the backstretch. Smith’s No. 18 had already piled into a sliding Tyler Ankrum, and was coasting on the apron to get off the racing surface; Creed, attempting to avoid everyone, slammed into the rear driver’s side of Smith’s truck at near-full speed.

Multiple drivers involved in this lap 71 crash at @LVMotorSpeedway.

The impact sent the No. 18 helicoptering into the air and flames shooting out of the No. 2’s front end.

Creed clambered out under his own power and ran over to Smith’s truck to check on the Kyle Busch Motorsports driver.

“The restarts were insane all night,” Creed said after he was released from the infield care center. “Had a lot of fun there at the beginning in restarts, then got shuffled back there, we didn’t pit. [Looking at the replay] Right there, I see the [No.] 1 get hit and spin, and honestly didn’t even see the [No.] 18, I was paying attention to the 1 so I didn’t hit her and I was watching the [No.] 26 to make sure he didn’t come down the hill.

“Just destroyed the [No.] 18. Just unfortunate. Maybe should’ve short-pitted that, me and Jeff talked about it under caution, but wanted to start up front in this stage. I didn’t have a great truck, but I thought we were a top-eight truck, probably. Unfortunate, but that’ll make Talladega interesting and fun […] we’re gonna keep working hard for this thing and make sure we have a shot at getting to the Championship 4.”

Smith eventually exited under his own power as well, appearing to be fine despite the impact.

“I’m all good,” Smith said. “Tyler got loose up at the top, I seen [sic] him completely sideways. Some tracks like this, I’ve had some experience with people who were spinning up next to the wall, they come down the racetrack and take out a good portion of the field with them, so [my] spotter told me to go low. I should’ve listened to him. So it’s completely my fault, I went high, went with my gut. Bit the bullet for it, but I guess it is what it is, just a heartbreaker.

“We had a lot of good momentum, had a really fast [truck] tonight. […] Disappointed in myself.”

Ankrum told FOX that the crash was triggered by Austin Wayne Self drifting high and Ankrum’s plan to pass the No. 22.

“[…] Ran out of talent,” Ankrum said, though initially drowned-out interview audio made it unclear if he was referring to himself or Self. “I was racing the [No.] 22 there and he faded high, I was gonna try to grab his right-rear quarter and got up in the marbles and just lost it. Then the [No.18], here he comes and I go back down the track and I don’t know who else hit me. I know Sheldon was involved in that wreck, so I apologize to him, I mean, he’s in the playoffs and I’m not. It sucks, we had a pretty fast truck […] we’ll just go to the next race.”

The multi-truck crash wasn’t the only mid-race incident to claim a playoff driver, as the first to do so was a mid-race yellow for Zane Smith. Smith, who squeaked into the second round of the postseason, suffered a flat tire but couldn’t make it to pit road before the shredded tire tore apart the left-rear paneling of his No. 21. It also ripped out the battery, forcing the team to swap it out for a less than optimal substitute.

Power issues also plagued John Hunter Nemechek, who brought out a caution on lap 54 when he ended up stopped on the track. The No. 4 brought out another on lap 82 when he rolled to a stop a second time.

Carson Hocevar suffered problems later on after running well all night, slowing the No. 42. This led to a rather intentional-looking spin by the playoff driver at the entrance of pit road, causing NASCAR to hold the Niece Motorsports truck a lap in his stall.

Christian Eckes won the race for his first career victory, the second straight week with a first-time winner after Chandler Smith claimed the win at Bristol.

Rhodes currently sits first in the playoff standings, +34 over the cutline and six ahead of second-place Nemechek. Friesen and Crafton currently make up the transfer spots, both less than 10 points to the good, while Creed is five points below the cutoff, Hocevar 16, Zane Smith 19 and Chandler Smith 24.

Talladega looms ahead for the Truck Series field next Saturday (Oct. 2). Raphael Lessard scored his first career win in last year’s race at the superspeedway.

Ah, the ‘fun’ consequences of having a ‘playoff’ with every competitor on the track.