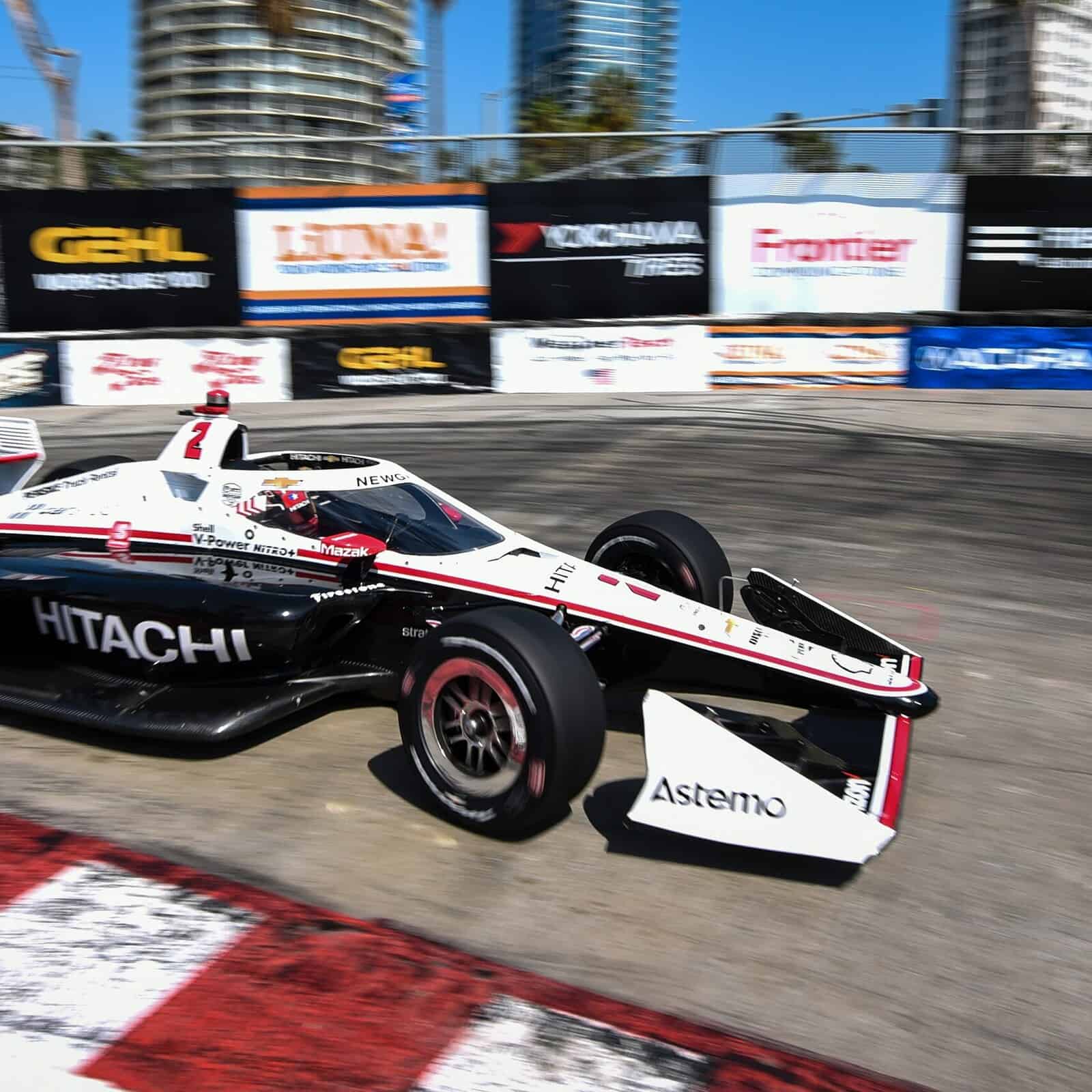 LONG BEACH, CA — Josef Newgarden’s NTT IndyCar Series championship hopes may be remote but they improved ever so slightly as the two-time IndyCar champion managed to secure the 15th IndyCar pole position of his career ahead of Sunday’s (September 26th) Acura Grand Prix of Long Beach.

“Really proud of the team, felt like our car was good from the start,” Newgarden said. “Just needed the track grip to come up. The more grip we had, the better I felt our car was. Yeah, pretty happy for our whole team, especially Gavin (Ward, race engineer), all the boys on the car, Hitachi, Team Chevy.

“Got one goal accomplished for the weekend. Hopefully we can finish things off tomorrow and have a clean day. Staying alive, man, for now.”

Scott Dixon qualified second, just .2181 seconds behind in the No. 9 Chip Ganassi Racing Honda and ahead of Helio Castroneves, Simon Pagenaud, Felix Rosenqvist and Romain Grosjean in the final round of knockout qualifying.

Dixon’s second-place qualifying run is his fourth in the last five races at Long Beach.

“The car in qualifying was really good,” Dixon said. “A bit bummed. Helio totally screwed us on that last lap there. I think we definitely had enough speed to be right there for the pole.

“Obviously we didn’t improve enough just because we caught him throughout that lap.

“Kudos to the team for getting the car fixed. Actually did a fair bit of damage because all the brakes caught on fire, burnt a lot of the wiring and shrouds, all that stuff.”

While Newgarden may have slightly increased his chances at stealing the championship, another championship contender struggled to find good luck in qualifying.

Pato O’Ward ended the second round of qualifying in eighth place but there were extenuating circumstances that could have seen the Mexican racer climb into the Firestone Fast Six.

O’Ward was in sixth place when Will Power’s car stopped on the right side of turn 10 near the auxiliary pit entry. Yellow flags waved for the rest of the session, meaning that drivers had to slow down their pace at a minimum of 15 percent over the course of the sectors where the yellow flags were waved.

In the dying moments of the second round of qualifying, Felix Rosenqvist and James Hinchcliffe advanced their positions to sixth and seventh in the session, knocking the No. 5 Arrow McLaren SP Chevrolet down to eighth place.

IndyCar stewards analyzed the situation and penalized Power for causing a yellow flag that affected competitors and also penalized the No. 18 of Jones for not slowing down sufficiently.

While analyzing the micro-sector data from the second group of qualifying, however, neither Hinchcliffe nor Rosenqvist slowed down in the micro sectors around turns 9-11.

Below is the data for Hinchcliffe, then Rosenqvist, then O’Ward, who had slowed down. The top two rows of data are the final three micro sectors with time and speed of the penultimate lap of qualifying, the bottom rows are the data for the final lap covering the last quarter of the backstretch until the exit of turn 9, turn 10, and then turn 11 to the alternate start/finish line for practice and qualifying.

The above explanation of the data can be extrapolated to the other two drivers mentioned and an IndyCar spokesperson has clarified that yellow flags were waving until the end of the session.

O’Ward was understandably upset about the situation.

“(Felix and I) are in the same team and we have literal data that shows that at least two of the cars that didn’t get penalized kept going quickly in the yellow flag,” O’Ward said. “I don’t know. Maybe rules don’t apply the last race of the season when everything’s at stake.

“It just sucks. Sucks that we’re stuck there because we should have transferred. We had the car to fight it. I don’t know if for pole, but we definitely had a car to be in the Fast Six and  start within the first two rows.”

Moving back to the beginning of qualifying, the first group of round one of qualifying was probably the most stacked group of the first round of qualifying in the 2021 IndyCar calendar. In that group were all three championship contenders and winners from 11 of the 15 races so far.

After group one, Newgarden, Dixon, championship leader Alex Palou, O’Ward, Power and Ryan Hunter-Reay advanced to round two, while Alexander Rossi could only go eighth fastest in the group, meaning that the two-time Long Beach winner will start 15th out of 28 cars.

The session came to a premature end as the No. 60 Meyer Shank Racing Honda of Jack Harvey spun into the tire barrier in turn 8 after the checkered flag flew and could not continue. While Harvey was in the tires, Power in the No. 12 Team Penske Chevrolet went around turn 8 and hit Harvey’s car with the left rear of his own car, damaging the left rear suspension and knocking the rear wing off of the mounting pylons.

Harvey lost his two best laps for causing a red flag, thus not allowing any other competitors to finish setting their final laps of the session.

In group two, Rosenqvist was fastest over Pagenaud, Castroneves, Grosjean, Hinchcliffe and Jones, but the big story from that group was Colton Herta not advancing in seventh place.

Herta had been the fastest car in both practice sessions over the course of the race weekend, but the California native tapped the wall a little too hard on his final lap and Herta was unable to improve, sliding down the time sheet to an eventual starting position of 14th.

Not advancing from the second round of qualifying were Hinchcliffe in seventh, O’Ward, Jones, Palou, Hunter-Reay and Power.