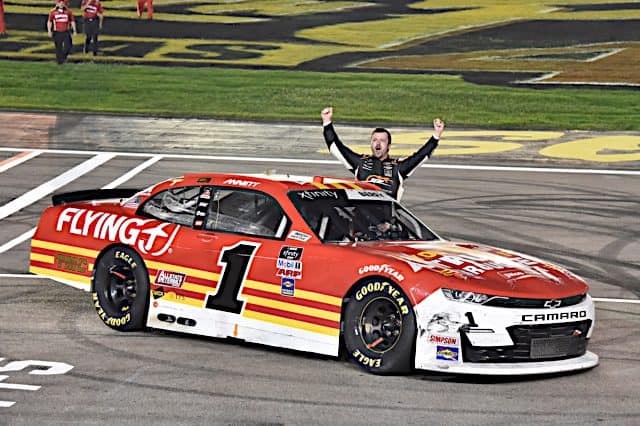 Kaulig Racing has been the hot team in the NASCAR Xfinity Series of late, but JR Motorsports enjoyed a night with Lady Luck as Josh Berry took the victory at Las Vegas Motor Speedway to win the Alsco Uniforms 302 Saturday (Sept. 25). Justin Allgaier and Noah Gragson finished second and third, respectively, giving three of the team’s four cars top-five finishes.

“That thing was so fast, it took me a while to figure it out,” said Berry, who was substituting in the No. 1 car for the injured Michael Annett. “I just had to stay disciplined and these guys made the right adjustments. Me and Justin have raced together a lot this year, and he got the better of me in those. Today, we were able to get one. It was great to get the No. 1 to the next round of the owner’s points [championship] … 1-2-3 finish, it was really cool.”

Austin Cindric led the field to green to begin the first stage with AJ Allmendinger in tow. The opening laps displayed why they battled for the regular season title as both Cindric and Allmendinger checked out, establishing a six-second lead over the rest of the field until the competition caution on lap 25.

The next restart would change the complexion of the race. A 12-car pileup happened within the first two turns as  playoff drivers Riley Herbst, Jeremy Clements and Jeb Burton were caught in the carnage.

BIG WRECK on the restart at @LVMotorSpeedway!

Allmendinger held off Daniel Hemric for the stage win after most of the remaining laps from the wreck were run under yellow, creating a short shootout for the green-and-white checkered flag.

It didn’t take long for the caution to come out yet again near the beginning of stage two, as Ty Dillon led the field in the opening laps. Ryan Sieg, another playoff driver, got loose off of turn 2 and spun, collapsing the back of his car.

The remainder of the stage remained calm, for the most part, as Allmendinger struggled and fell back while a surprising Dillon and Allgaier showed they were the class of the field. Allgaier was able to edge out Dillon for the stage win, with Cindric taking third.

Allgaier led the field to the green for the final stage. But it didn’t stay green for long. Brett Moffitt turned playoff driver Justin Haley, bringing out the third caution for an incident and sixth yellow flag overall.

With 68 laps remaining, Cindric battled Allgaier for the lead after Allgaier had been the dominant car for the majority of the race. The duo was pressured by Allmendinger and a surging Berry behind them.

As the stage wore on, Berry was able to move up as Allmendinger faded. Gragson also began a run into the top four after overcoming two pit-road penalties that sent him to the back during stage breaks.

But it was clear Berry had the most speed of the JR Motorsports trio surging to the front of the field. He took the lead away from teammate Allgaier with 42 laps remaining.

From there, a rare NXS green flag pit stop cycle got underway, bringing concern about speeding and drivers making clean stops. Ty Gibbs fell victim, caught speeding after the rookie had run inside the top five all afternoon.

Between the two leaders, Allgaier had the better pit process and was able to pass Berry on the track after the stops cycled through with less than 25 laps remaining. However, it didn’t take long for Berry to pass Allgaier once again for the lead with 16 laps left, cruising to the win the rest of the way.

Well that was quick. @joshberry takes back the top spot. pic.twitter.com/jHP9uwGUwt

Cindric and Hemric rounded out the last two top-five positions, while Brandon Jones and Allmendinger finished sixth and seventh. Eighth and ninth went to Dillon and Haley, while Harrison Burton came home 10th.

The Xfinity Series next rolls onto the high banks of Talladega Superspeedway on Saturday, Oct. 2. Coverage begins at 4:30 p.m. ET with coverage provided by NBC Sports Network.

He looked pretty impressive tonight, that’s for sure.

Josh Berry is a future cup driver. Lots of talent!!!

Ryan Sieg is not in the playoffs.

I also like that Berry has progressed his way up through the racing ranks working on his own car and isn’t some rich kid who had his billionaire daddy buy him seats in top level cars.