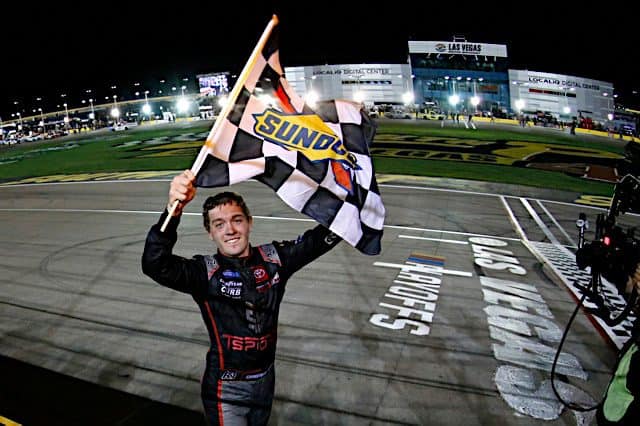 In a Nutshell: Christian Eckes scored his first career NASCAR Camping World Truck Series win in a chaotic Round of 8 opener at Las Vegas Motor Speedway Friday night (Sept. 24). In just his ninth start this season, the part-time driver of the No. 98 Toyota took advantage of a late-race restart to take the top spot and the victory over teammate Ben Rhodes as the caution flew on the white flag lap. Matt Crafton, Johnny Sauter and Todd Gilliland rounded out the top five.

While it was John Hunter Nemechek who led the first 33 laps and scored the stage one win, Todd Gilliland clearly had the truck to beat, though he did struggle early on restarts. Finishing second and first in stages one and two, the Front Row Motorsports driver consistently posted multiple fastest laps and appeared to be able to put the No. 38 Ford anywhere he wanted on the track. But after leading a race-high 66 circuits, the late race restart that gave Eckes the win also spoiled the potential victory for Gilliland. His fifth-place finish marked his fourth top five in the last six races.

Inspection in the NASCAR Camping World Truck Series garage is complete.@christianeckes is officially your winner at @LVMotorSpeedway! pic.twitter.com/tyLS8eSmGe

The chaotic late-race restart that saw Eckes snag his first career win also highlighted a 1-2-3-4 finish for ThorSport Racing. It was the first time in Truck Series history that any team has swept the top four positions.

If not for a couple of late cautions, though, it likely never would have happened. Under the eighth caution of the night, Sauter was the only driver to stay out while the rest of the field pitted, leaving the No. 13 team as a sitting duck. Ever the pessimist, he made a comment on the team radio saying they’d be lucky to finish inside the top 15. And he wasn’t actually wrong. The fresh tires on the rest of the field swallowed him up and he fell quickly through the running order.

But two more cautions gave crew chief Joe Shear Jr. a chance to gamble and bring Sauter down pit road for fresh tires since it was clear he wasn’t going to move forward in the field without them. With four laps remaining, Sauter restarted 14th, but those fresh tires allowed him to chop his way through the field to fourth before the yellow that flew on the white flag lap, completing the top four sweep for ThorSport.

The feat comes just a little over a year after Grant Enfinger, Crafton and Rhodes gave the organization a 1-2-3 finish at Richmond Raceway last September.

ThorSport has two of its four drivers in the playoffs, and both currently sit above the cut line to make the Championship 4. Rhodes and Crafton sit first and fourth, respectively.

With Talladega Superspeedway and Martinsville Speedway looming as the final two races to set the Championship 4, the entire playoff field had Las Vegas circled as the place they wanted to win and guarantee their spot in the championship race. Instead, five of the eight playoff drivers faced adversity at the mile-and-a-half track and finished outside the top 20.

Zane Smith was the first when he suffered a flat tire after a three-wide battle with Nemechek and Stewart Friesen. A cut tire in itself wouldn’t have been that bad, but the damage that followed ripped the battery from the truck and damaged the mount enough that the No. 21 team had to be creative in finding a way to get a replacement to stay in place for the remainder of the race.

While that situation wasn’t ideal, it was in the sense that NASCAR deemed the issue a mechanical problem rather than crash-related, which took the timer for the Damaged Vehicle Policy out of the equation. Smith was able to run to the finish, though he was 29th, 18 laps down.

Fast forward about 10 laps after Smith’s incident and Nemechek, who won stage one, slowed dramatically on the track. Initially assumed to be a tire issue, it turned out the No. 4 Toyota had some significant power issues and intermittently shut off. The problems were significant enough that Nemechek drew the yellow twice as his truck slowed on the track, and though he was running at the finish, it was in 33rd after completing just 85 of the scheduled 133 laps.

Meanwhile, just 10 laps into stage three, last week’s winner, Chandler Smith, and Sheldon Creed were both taken out in a vicious wreck that started off as an innocent spin by Tyler Ankrum. Smith went high to try to avoid him and instead smacked the back end of the No. 26 Chevrolet. As he spun down the track out of control, Creed attempted to avoid the carnage happening ahead of him and instead plowed into Smith.

Multiple drivers involved in this lap 71 crash at @LVMotorSpeedway.

While there was plenty of criticism for Creed’s move on the apron, it’s hard to fault a driver trusting their instinct to miss a wreck as we’ve seen countless times in the past. In fact, the in-truck view showed he reacted too late to avoid Smith after he saw him.

Take another look at the lap 71 crash from the perspective of @sheldoncreed as he collided with @CSmithDrive. pic.twitter.com/eF2doMI4NG

What did stand out, though, is despite his frustration with how Smith and KBM teammate Nemechek handled the finish at Bristol Motor Speedway last week, Creed was quick to check on Smith after emerging from his own burning truck. It’s a simple reminder that, rivalries and on-track anger aside, this sport is one large family.

Carson Hocevar had another one of those races that’s shown the rookie is definitely capable of making it to victory lane this season, and was on his way to another strong finish. But a late-race vibration sent him to pit road for an unscheduled pit stop, and he spun at the entrance to pit road, drawing a caution inside 10 laps to go.

Though he opted to skip pit road until it was open for service under that yellow, NASCAR deemed the spin intentional and held the No. 42 Chevrolet for one lap on pit road. Hocevar was quite vocal on the radio in saying the spin was unintentional, and whether it was on purpose or not, the timing was rather suspect. He ended up 22nd.

Interestingly enough, it was at Las Vegas earlier this season that Kyle Busch spun in a questionable manner, leading the sanctioning body to take a closer look at drivers who spin to draw a caution when it would be more convenient for them.

“We were just racing hard for nothing way back in the pack and I think it was the #02 – I believe it was Kris Wright – just felt like a hero on the last lap racing for God knows what probably 18th and just decided he wanted to destroy us on the last lap,” Hill told LASTCAR after the race. “So this is so unfortunate – this is the last mile-and-a-half truck that we had. At least we don’t have any more mile-and-a-halves to go to but just completely wipes us out for the year. And I guess we start building new trucks for next year.”

The future is here in the #NASCAR Truck Series. Time to bring the 2022 #Tundra TRD Pro to the track! #TeamToyota pic.twitter.com/H6a13Ohy1j

Point Report: After scoring points in both stages and finishing in the runner-up position, Ben Rhodes leaves Las Vegas with the lead in the standings, albeit a slim six-point advantage over John Hunter Nemechek. Stewart Friesen sits third, followed by Matt Crafton as the last driver above the cut line for the Championship 4. Sheldon Creed dropped to fifth and now sits five points below the cut line, followed by Carson Hocevar. Zane Smith and Chandler Smith round out the top eight positions.

Meanwhile, Todd Gilliland leads Austin Hill as the duo rounds out the top 10. Grant Enfinger continues to lead the rest of the non-playoff drivers and holds a 90-point advantage over Johnny Sauter, who sits 12th.

.@christianeckes talks about his first win in victory lane at @LVMotorSpeedway! ? ? pic.twitter.com/QssKPDDtLe

Ben Rhodes wanted to have the opportunity to see what he could have done the final two corners but he didn’t seem that bitter after finishing second to teammate Christian Eckes at Vegas: pic.twitter.com/fe3T5OGs1k

Matt Crafton frustrated with his night & tepid about heading to Talladega next weekend: #NASCAR pic.twitter.com/sKtKTLiZpq

My fault. Should’ve went low. @3widemiddle made the right call just figured typically they come down the hill. Time to head to Dega. #HaveFaith https://t.co/YtoL4AnN5X

Sheldon Creed explains why he was going so fast when he ran into the wrecked truck of Chandler Smith at Vegas. Smith says he understood and has no issue with Creed.

This sport will beat you down like no other. We were so fast tonight. I felt the most comfortable I’ve felt all year. So many hours get put in during the week of preparing for these races all to just get wrecked. Just gotta keep diggin and one of these days it will show.

Learned the definition of “dirty air” tonight… sad to experience it but not much I could’ve done. Can’t thank Charred Flags and Niece enough for tonight. Was a blessing to just be able to take the green. Onto Martinsville.

Up Next: The Truck Series moves on to Talladega Superspeedway next weekend for the second race in the Round of 8. Coverage for the Chevy Silverado 250 begins Saturday, Oct. 2 at 1 p.m. ET on FOX Sports 1.