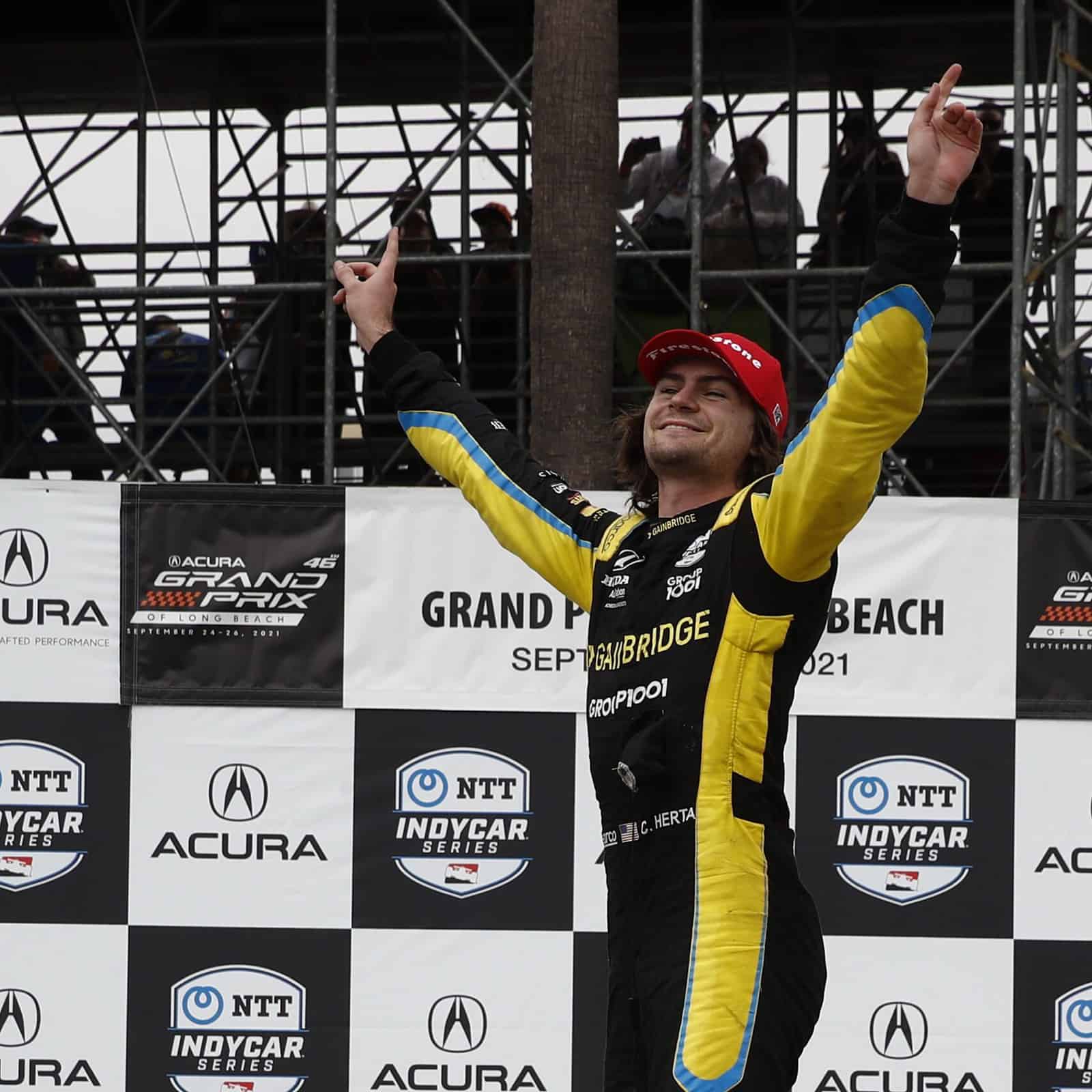 Palou, at 24 years of age, is now the first Spaniard to stand atop the world of American open-wheel racing, in only his second year of IndyCar competition.

“What a year, what a season, this team is amazing. I don’t know what to say,” Palou said. “I’m super proud to be a champion!

”Dream completed, let’s get another one now!”

Palou drove a conservative race, narrowly avoiding trouble on the race’s opening lap. Palou spent the rest of the day driving a calm, risk averse strategy which saw him remain firmly planted in the top 10 until the race’s end.

Meanwhile, Herta spent the final five laps of the race defending Newgarden, who mounted an almost rabid charge for the race lead as the laps wound down. Newgarden’s red tires seemed clearly superior to Herta’s Firestone blacks. However, the tight nature of the Long Beach circuit meant space for Newgarden to overtake Herta was more than scarce.

Ultimately Herta managed the pressure from Newgarden perfectly and took the checkered flag to end 2021 on a high note.

In victory lane, Herta basked in the joy of winning his home race. “It feels amazing. Great car, great team,” Herta said. “This has been on the bucket list for so long!”

Herta used a cunning pit strategy to beat the yellow flag and assure himself a place at the head of the field after pit stops cycled through. From there, Herta was turned loose by Andretti Autosport and Newgarden’s best option quickly became defending from Scott Dixon.

Of course, for a two-time champion second place can’t be extremely fulfilling. Nevertheless Newgarden was in good spirits after the race.

“If there were no yellows I think we would’ve been okay,” Newgarden said. “But that’s how it rolls sometimes. We were in the fight — just came up short.”

O’Ward entered the race on the back foot following Saturdays’ controversial qualifying session and his fortunes didn’t improve after the green flag waved. O’Ward was spun by an over-ambitious Ed Jones as the field exited the final hairpin. Jones was given a drive through penalty for avoidable contact.

Ed Jones tries to pass James Hinchcliffe but gets into the back of the @ArrowMcLarenSP driver. #INDYCAR

Fortunately, O’Ward made his way to the pits and rejoined the track on pace.

However, on lap 19, O’Ward ground to a stop on the frontstretch with a broken drive shaft. Conveniently enough, the break was located in the same spot that Jones’ front wing impacted O’Ward’s McLaren SP Chevrolet. With O’Ward out of the race, the championship battle was narrowed down to Palou and Newgarden.

O’Ward returned to the track on lap 50 in an effort to salvage a third place points finish, rather than retire and concede third in the standings to Dixon. O’Ward’s effort, valiant as it was, came to an unfortunate end when the young Mexican finally retired on lap 77.

Scott McLaughlin walked away from Long Beach as the 2021 Rookie of the Year after Romain Grosjean broke a toe link and had to retire his no. 51 Honda. Following a strong rookie season, McLauglin looks intent on carrying this momentum into 2022, as he is still searching for his first win in IndyCar. McLauglin’s best career finish thus far is a second place run at Texas Motor Speedway.

The top 10 from Long Beach are:

Spirited, controlled drive to hold off Newgarden on degrading primaries at the end. Good job Colton, some redemption after earlier mishaps with a dominant car!

Absolute shame what happened to O’Ward, as his inclusion down the stretch of the race would have added another element of excitement. He had his work cut out even with a perfect car, but a shame he wasn’t able to at least go down fighting instead of sitting in the pits. He will be back, this kid has a lot of talent and a lot of good years ahead of him (as do many in the current Indy Car field!)

Finally, congrats to Palou!! This guy continues to impress with consistency and an iron resolve that seems to defy letting anything mentally derail him on the track. Well deserved!

I’m liking the depth and level of talent in Indycar right now, especially the younger and mid-career drivers. The next decade should bring some great racing and fierce battles! I can’t wait for next season to kick off. :-)