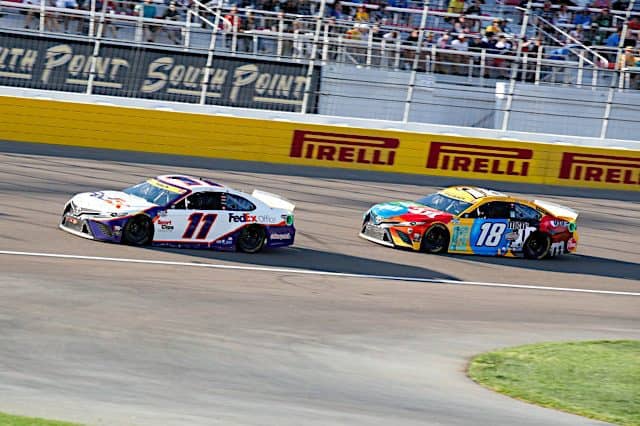 Joe Gibbs Racing has lamented its shortcomings at 550-horsepower racetracks all season, but the team’s performance at Las Vegas Motor Speedway should quell that concern.

Good runs are always appreciated, but a run this notable at a mile-and-a-half where Chevrolets have dominated this season comes at a critical time of year.

Hamlin’s win, the byproduct of leading 137 laps on Sunday, locks him into the Round of 8, which is earmarked with two mile-and-a-half tracks in Texas Motor Speedway and Kansas Speedway.

Hendrick Motorsports was largely viewed as the favorite on 550-HP tracks this season. But at the first such track of the playoffs, it’s JGR which takes three of the top four positions.

“But they [Hendrick] have just been really, really strong obviously. They’re able to do great things with their cars, especially in traffic, that is very, very hard to replicate. But we’re still taking steps and strides forward I believe to try to match them. And again, it’s very, very close. I never thought that we’ve been worse than a third- or fourth-place car on these tracks all year long. It’s just today we kind of finished the deal.”

In third place, Busch was pleased with the outcome after some mid-race misfortunate was saved by an early caution in stage two when Joey Gase slammed the outside wall in turn 2.

Just before Gase crashed, Busch radioed to his crew to be ready to pit for left-side tires due to a vibration in the left rear. The caution allowed Busch and a healthy number of others — including his JGR teammates — to come down pit road at the edge of the fuel window, subsequently setting them in a better position to attack for the win.

“It looks like there was a piece of debris between the wheel spacer and the rim” of the left-rear tire for Kyle Busch, who was largely saved by this caution as he was getting ready to pit for a vibration. #NASCAR

“Certainly you want to win, but we maximized today the best we had,” said Busch, who led two laps Sunday night. “[Hamlin] was better than us. I thought early when the sun was out we were better than him, but once the lights turned on we kind of lost a little bit and we got ran into the wall twice off of turn 2; that doesn’t help things. Guys did a great job. Thanks to Ben (Beshore, crew chief) and all the guys on our M&M’s Toyota Camry. We were fast, we were front runners all night long.”

Truex was never a dominant factor but steadied himself in the middle of the top 10. His car clearly had speed and eventually wound up fourth behind two of his JGR teammates.

“We just could never get the balance quite right,” Truex said. “We were really struggling off of turn 4, no matter what we did. Not sure exactly why. It’s not something that we’ve had here in the past. Definitely something going on there that we couldn’t fix. We tried a lot. We made a lot of adjustments. James (Small, crew chief) and the guys did a really good job executing and we got all we could out of it.”

The benefit to a good run at Las Vegas is that the track has significant similarities to Kansas, which marks the second race of the next round of the playoffs.

”There are certainly some things we can learn from this racetrack that we can take to Kansas,” Hamlin noted. “I’m sure we’ll study this racetrack quite a bit and figure out still how we can be better than what we are and apply those things toward Kansas. Certainly there’s a lot of parallels that you could draw between the two, so it’s very encouraging from my standpoint.”

Yep. The HMS cars might as well pack it in. IT IS OVAH! The fat lady is singin’.