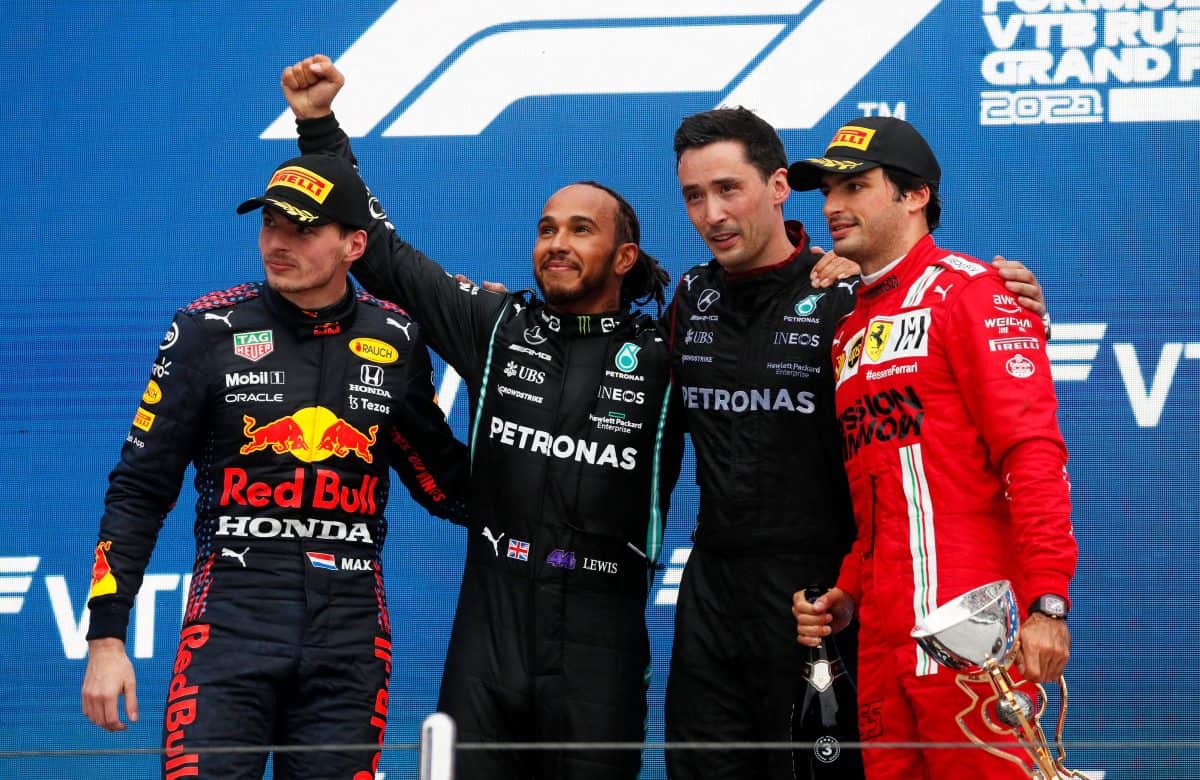 Following his first win in 2007, nobody could’ve ever guessed that, 14 years later, Lewis Hamilton would be not just setting but breaking his own Formula 1 records.

After playing a great strategy call in the rain, Hamilton claimed his 100th career Formula 1 victory Sunday in the Russian Grand Prix. Passing Lando Norris after he spun off in the wet, Hamilton becomes the first driver in F1 history to accomplish such a feat, also wresting the championship lead from Max Verstappen in the process.

Starting dead last on the grid after taking his engine drop penalty, a podium might have seemed out of reach for Max Verstappen. However, when the rains came, clever pit strategy from Red Bull paired with incredible driving clawed out a second-place finish for him. Minimizing Verstappen’s points loss in the championship, the gap now stands at just two between the duo with nine races remaining.

After leading early, Carlos Sainz recovered from a slow pit stop to take podium number two of the season and his first since the Monaco Grand Prix. Daniel Ricciardo and Valtteri Bottas completed the top-five finishers.

Mick Schumacher and Nicholas Latifi were the only DNFs of the race.

Off the start, Sainz was able to clear Norris heading into turn 1. Hamilton bogged down and ended up being stuck behind the McLaren of Ricciardo. Meanwhile, at the back, Verstappen, Bottas and Leclerc mounted a furious charge to gain positions.

Norris hunted down Sainz before taking the lead away from him on lap 13.

Stroll pitted first as the undercut was super important; joining him was Ricciardo and Sainz who were both plagued by slow pit stops. Most of the leaders elected to stay out a little longer, but the threat of rain was heavy on the horizon.

The laps continued to click down and Hamilton got closer and closer to Norris. With around five to go, the rains finally came: light at first but picking up as time went on. Hamilton struck first to pit for intermediates, while Norris decided to gamble to see if he could hold out for only three more laps.

Unfortunately for Norris, the rains came torrentially, allowing the gamble to pay off for Hamilton. To add insult to injury, Norris spun off the track, all but sealing the century mark for the Mercedes driver.

“It’s taken a long time to get to 100 and, at times, I wasn’t sure it would come,” Hamilton said. “Lando did such an amazing job, he had incredible pace. It was bittersweet to see my old team ahead. The team made a great call right at the end; I didn’t want to let Lando go but again, I didn’t know what the weather was doing.”

For Norris, it was utter heartbreak. What seemed like his first career win slipped away, literally, as wet weather conditions ruined his run. An excellent drive turned to Norris summoned to the stewards after crossing the white line when entering the pits. Awarded driver of the day, both he and his fans will have to hold onto what could have been on the streets of Sochi.

“I don’t know where to start. I made a decision just as much as the team,” Norris said. “They thought I could box, my decision, I thought it was the right way to go. It’s pure heartbreak. I did everything I could, a bit of luck … I was told the rain was the same amount, if it had been the same amount, staying out would have been the right decision.”

While Norris had his heart broken and Hamilton celebrated, Verstappen might be leaving Russia the happiest out of everyone. Starting last and fighting to P2, what seemed liked a lost cause ended up becoming a crucial moment in the championship fight.

“It was pretty tricky on the in-lap to make the call for inters, it was really slippery.” Verstappen said. “If we’d have gone one lap earlier, you’d have destroyed the inters. The race itself was not very easy. Luckily, with the rain, it helped us to make that last jump. With the penalty we had, to lose only one spot … when I woke up, I definitely didn’t expect this result.”

The F1 circuit will take a week off before heading to the sight where Hamilton clinched his seventh title last season: Intercity Istanbul Park.

Hamilton is the defending winner, while Verstappen will look to bounce back with a fresh engine. Lights out for the Turkish Grand Prix will occur at 9 a.m. ET on Oct. 10. Television coverage will be provided by ESPN in the United States.

What Hamilton has done (100 wins) is amazing. I remember thinking Jackie Stewart’s 27 wins would never be broken in 1973. It was a lot different back then.