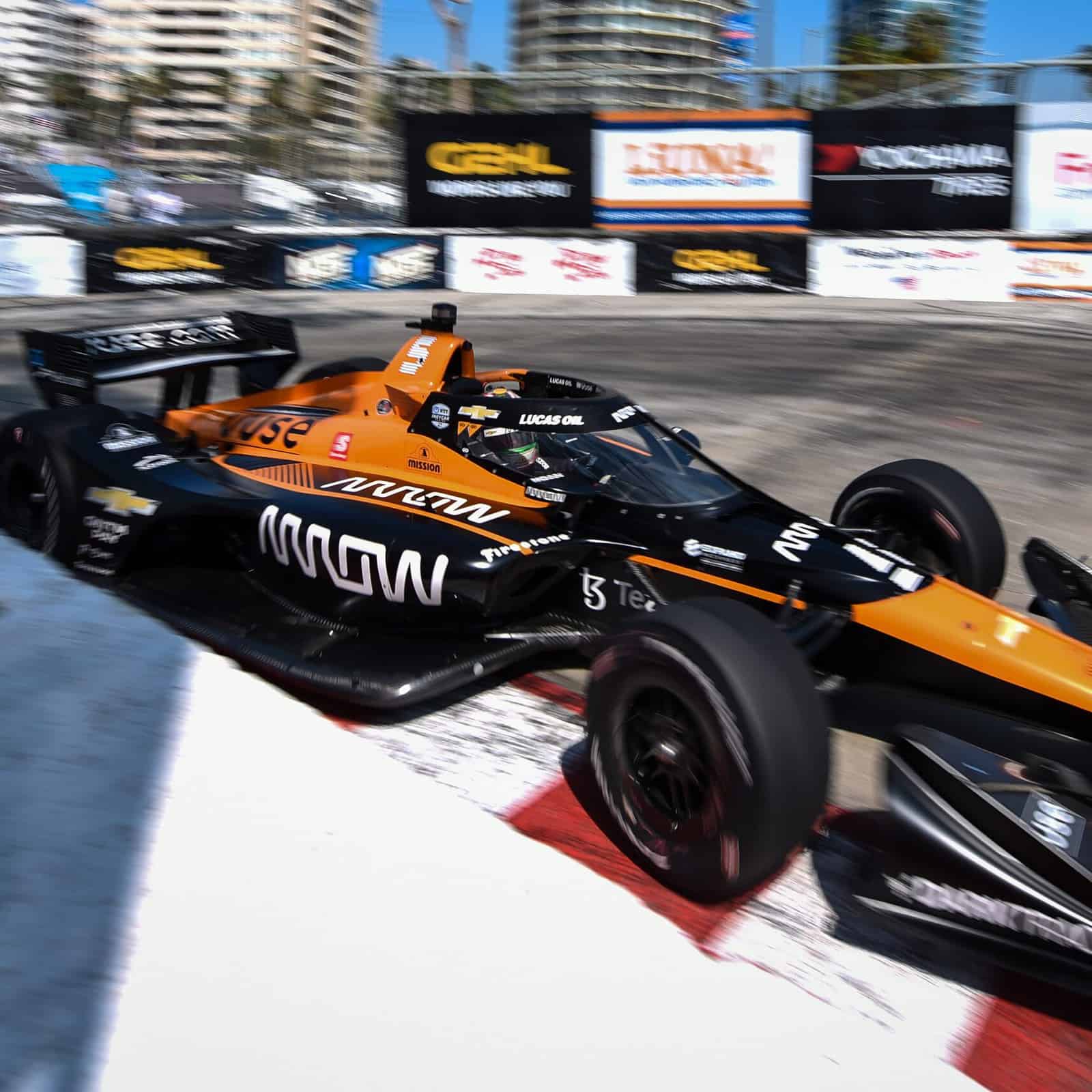 LONG BEACH, CA — Pato O’Ward’s 2021 Acura Grand Prix of Long Beach was always going to be a mountain to climb if the Mexican racer was going to have a shot at winning the NTT IndyCar Series championship.

However, contact early in the race began a chain of events that culminated in O’Ward’s early retirement from the race with a 27th place finish and falling from second to third in the points standings.

After moving from eighth to seventh at the start of the race, O’Ward went through turn 11 to end the first lap of the race. Behind him, Ed Jones was attempting to pass James Hinchcliffe for eighth position. Jones’s right front wing hit O’Ward’s right rear tire, sending the No. 5 Arrow McLaren SP Chevrolet into a spin after the hairpin.

Ed Jones tries to pass James Hinchcliffe but gets into the back of the @ArrowMcLarenSP driver. #INDYCAR

“Yeah, it’s not the first time [Jones]’s hit us. And not the first time he does something stupid all season,” O’Ward said. “So, I just wish he could use his head a little bit more; at least respect the guys that are fighting the championship. I don’t know what else to say. That corner is kind of just respect the guys that’s in in front and then maybe you get a run. I mean, I’m not telling him not to race me but don’t be stupid about it.”

O’Ward pitted for a new set of tires and continued in the race, but the right rear driveshaft broke on the car after suffering some damage in the first lap incident and O’Ward stopped just after the pit exit on lap 18.

The mechanics repaired the car and O’Ward went back out on track to set the race’s fastest lap but with 43 laps completed, O’Ward’s race was over. After starting the day second in points with a 35 point deficit, O’Ward ended the year with 487 points, 62 points behind Palou and 24 behind Josef Newgarden who leapfrogged O’Ward to finish second in points by finishing second to race winner Colton Herta.

While O’Ward’s disappointment was clear for all to see and hear on the broadcast, there were many positives for the 2018 Indy Lights champion this season. O’Ward was the first driver to win multiple races and he also won three pole positions. Breaking through to win at Texas Motor Speedway with a challenging track in front of his home fans was a welcome sight.

Seeing O’Ward win in Detroit with a late race charge through the top part of the field was also fun to watch. However, O’Ward was philosophical about his team and their performance this year.

“I think we’ve had a great season so far. I’m proud of the team. I’m proud of myself,” O’Ward said. “Obviously, it wasn’t the perfect of seasons, but I think that’s just how it’s going to be. You have to learn from the little mistakes that you might have made and then, I feel like that gets you stronger. I’m looking forward to next year. I think we have a great baseline to start off from and see if we can get some more wins and challenge for a chance for another title.”