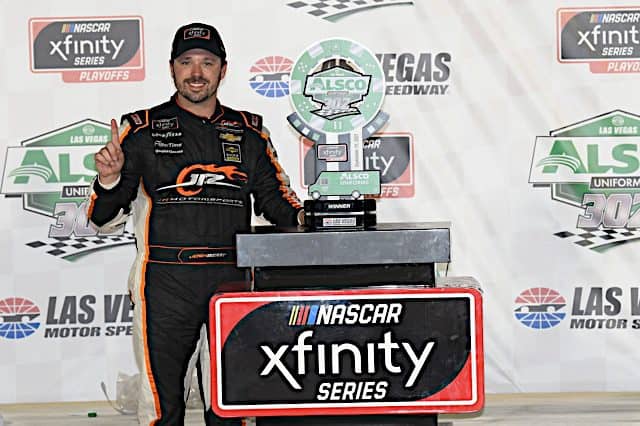 Turn the clock back to March, race number four of the 2021 season, and you’ll see Josh Berry finished seventh in the first NASCAR Xfinity Series trip to Las Vegas Motor Speedway. At the time, it tied for his best result in a budding NXS career.

In the months leading into Saturday’s (Sept. 25) Alsco Uniforms 302, Berry has started 16 additional races. He has matured, become more consistent, and developed into a wiser driver behind the wheel — not to mention that he grabbed a victory at Martinsville Speedway.

Due to Michael Annett’s leg injury, Berry found himself driving the No. 1 Pilot-Flying J JR Motorsports Chevrolet on a night he was supposed to be at Martinsville Speedway racing his late model in the Valley Star 300. Though not much of a factor early in the race, Berry popped into the picture halfway through the final stage. He stalked teammate Justin Allgaier for multiple laps before taking the air away from Allgaier’s rear spoiler on lap 160 and completing the pass for the lead.

Berry further showcased his maturation as an Xfinity driver when he completed a green flag pit stop without speeding or losing valuable seconds to his competition. When he finished his service on lap 183, Berry merged back onto the backstretch just three car lengths behind Allgaier, who pitted four laps prior. The Hendersonville, Tenn. native passed Allgaier on the outside three laps later and then set sail for his second career victory.

Berry led 38 laps of the 201-lap race at Las Vegas Motor Speedway and was the leader in a 1-2-3 finish for JR Motorsports, a first in team history. Allgaier retained second place, while Noah Gragson finished third. Austin Cindric ran fourth, holding off fellow playoff driver Daniel Hemric, who crossed the line in fifth.

For the first time in team history, Jordan Anderson Racing can check the “lead a lap” box off. Ty Dillon was out front for 17 laps, from lap 49 to 65. Dillon received a bit of damage to the right side of his No. 31 South Point Chevrolet during a wreck on lap 31. The wreck took nearly 10 laps to clean up, and during that time, Dillon pitted for repairs and tires. When the leaders pitted during the caution for stage one, he stayed out along with Brandon Brown for track position.

After the restart, while Brown fell through the field, Dillon retained the lead through lap 65, during which a caution and restart took place.

Our teams first lap ever led in the @NASCAR_Xfinity series. @tydillon is up on the wheel today. ?? pic.twitter.com/8GUEoE3Xna

Allgaier, on slightly fresher tires and a non-wounded race car, found his way around Dillon on lap 66. However, the No. 31 Chevrolet didn’t falter any further — Dillon’s stage two finish was second.

Unfortunately, a miscue by Dillon on pit road resulted in him losing positions during the pit cycle and knocked the team back to 10th. Dillon floated around 10th for the remainder of the race and finished an impressive eighth.

It was Jordan Anderson Racing’s first top-10 finish since Pocono Raceway in June. That event was the team’s sixth ever start and fourth top 10. Since Pocono, the team has had more of a coming down-to-earth experience after bursting out of the gate with great finishes in the team’s opening races.

That said, Dillon’s run Saturday at Las Vegas was a shot in the arm for the young team. Including Dillon, Jordan Anderson Racing has competed with eight different drivers through 17 races. Dillon puts his name alongside Tyler Reddick and Berry as drivers earning top-10 finishes in the No. 31.

Pit road penalties plagued Noah Gragson early in the race, suffering violations in each stage-ending caution pit cycle. During the first stage break, he drove through too many pit boxes. That sent him to the rear of the field on the restart. Then he sped on pit road during the stage two caution. Once again, he dropped to the back of the pack.

Gragson finished third, but he battled to get to the front because passing came at a premium, whether it was before or after the sun had set over Las Vegas. It was a bit out of character for a stronger car in the Xfinity Series to struggle to pass, yet it was refreshing and a good change of pace. But that meant it wasn’t the night for Gragson to decide to earn the award for most on-track passes. His race turned out OK, but he’ll wonder could’ve been if he didn’t have to drive his way back to the top five twice – especially if there’s a Big One at Talladega Superspeedway that takes out the No. 9 JR Motorsports Chevrolet.

The Big One appeared one week early when, during a restart on lap 31, a 14-car crash happened in turn 1. Of the 11 cars involved, three were playoff drivers. Riley Herbst was at the epicenter of the incident when he turned across the nose of Berry, who was forced to move up the track when Jeb Burton also moved up. The four-wide situation developed too quickly for Herbst and his spotter to react as Burton squeezed Berry into Herbst.

Ride with #NASCARPlayoffs driver @rileyherbst as he is collected in the lap 31 pileup at @LVMotorSpeedway. pic.twitter.com/GMjvBWmmba

The No. 98 Ford was turned and first hit fellow playoff driver Jeb Burton and Dillon. The wreck also collected playoff driver Jeremy Clements, who was on fresh tires in an attempt to drive his way into the top 10 for stage points. It was the end of the day for Herbst, Burton and Clements, putting all three into a significant hole for the remainder of the Round of 12, particularly when the remaining two races are Talladega and the Charlotte Motor Speedway ROVAL.

Burton is now 27 points behind eighth-place Brandon Jones. Herbst is 32 points behind, and Clements is 36, a tough mountain to climb.

Celebrations are in order for Bayley Currey and JD Motorsports after Saturday’s race in Las Vegas. Currey’s 13th-place result was his best on a mile-and-a-half track in 2021, the third-best such finish in his career. It also was the JD Motorsports No. 15 car’s best performance of 2021.

Following the green flag pit cycle, Currey was up to 11th, a position he held until Ty Gibbs and Brett Moffitt passed him in the final five laps. Despite that, he was the highest finishing JD Motorsports Chevrolet. Currey ended the day ahead of Landon Cassill in 16th (his best performance since Texas Motor Speedway in June), Ryan Vargas in 19th and Jeffrey Earnhardt in 29th.

“I guess we’ll go to Talladega where who knows what will happen.” – Riley Herbst

“Me and Justin (Allgaier) have raced together a lot this year, and most of them he’s got the better of me. Today, we were able to get one.” – Josh Berry

The first-ever 1-2-3 finish for JR Motorsports, completed by Berry, Allgaier and Gragson, wasn’t the only bit of JRM history completed in Saturday’s Alsco Uniforms 302. Berry’s win in the No. 1 means that all four teams at JR Motorsports have visited victory lane in a single season – something not done before in team history. Allgaier and Gragson have two victories in the No. 7 and No. 9 teams, respectively. In April, Berry delivered a win for the No. 8 team at Martinsville and now he’s done it for the No. 1 team at Las Vegas.

In addition, Berry’s performance at Las Vegas serves as a prelude to 2022, when he goes full-time with JRM. The rookie has progressed rapidly since February, turning into a driver to be reckoned with each week. Being in top equipment means he has always put together solid finishes, but not a performance like Saturday. Berry’s learned a lot this season, and he’ll be a threat for the 2022 championship, no doubt about that.

But first, the 2021 Xfinity Series title has to be settled and as we look ahead to Talladega, no playoff drivers are safe. All 12 playoff drivers are still able to leave Talladega next Saturday in a points hole. Jeb Burton, Herbst and Clements have a difficult decision to make: Race for stage points or hang out in the back and avoid mayhem.

Many would consider Cindric and AJ Allmendinger in excellent shape moving into Talladega. Cindric is 66 points above the cutline while Allmendinger sits 59 points above. But it’s Talladega, not Kansas. If they are involved in an early crash and other playoff drivers rack up stage points, all of a sudden, each of them will need to put their road course expertise to the test at Charlotte’s ROVAL.

If those two aren’t safe entering Talladega, no one is. Talladega will be a must-watch event.

The Sparks 300 at Talladega Superspeedway is on Saturday, Oct. 2, with a 4:30 p.m. ET start time on NBC Sports Network and MRN. Kaulig Racing has won the last three races at Talladega, with Justin Haley sweeping 2020 and Jeb Burton winning earlier this season. The Round of 12 for the Xfinity Series will conclude on the ROVAL at Charlotte Motor Speedway on Saturday, Oct. 9, where Allmendinger is the two-time defending champ.

When the playoff field is cut from 12 to eight, races at Texas Motor Speedway (Oct. 16), Kansas Speedway (Oct. 23), and Martinsville Speedway (Oct. 30) will determine who will be the four drivers racing for the championship at Phoenix Raceway on Nov. 6.