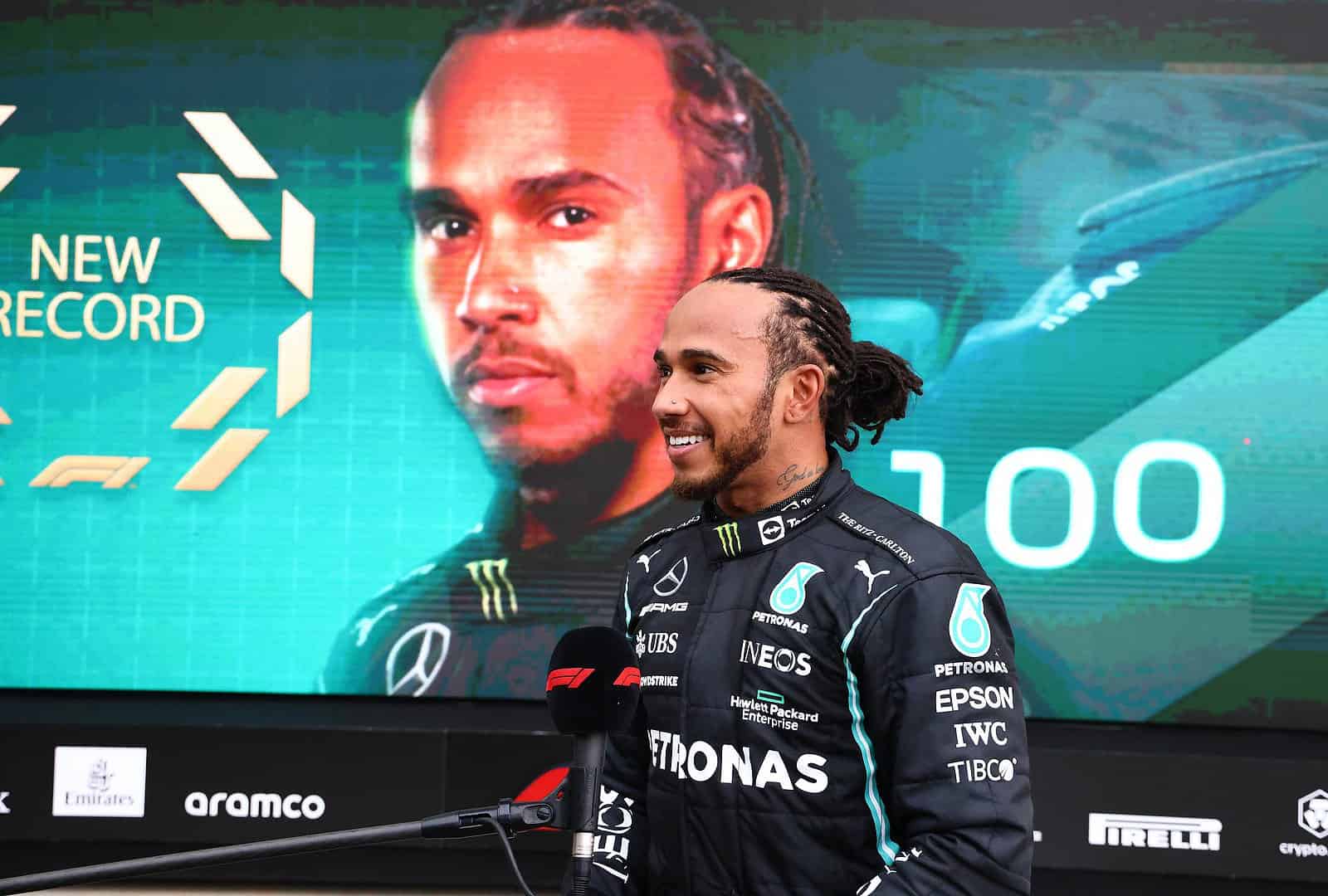 Lewis Hamilton started fourth, got squeezed heading into turn 1, fell back to seventh, and then started his climb through the Russian Grand Prix field.  By lap 2, he had taken sixth but could not make the gains that would be anticipated from his Mercedes in the early stages of the race.

Instead, he held steady, seemingly preserving his tires, and maintained his position while others came to him.  As Lance Stroll, George Russell, Daniel Ricciardo and Carlos Sainz pitted, he worked himself up from sixth and eventually into second.

Hamilton proceeded to hound Lando Norris for the last stint of the race, keeping the gap under two seconds and putting the pressure on the 21-year-old Brit.  It looked like all his efforts would come for naught as Norris continued to stay out front.

And then, the rains came.

Norris looked like he had made the right decision to stay, sitting out front and with a 40-second lead over third place.  But Hamilton’s Mercedes team implored him to pit for intermediate wet tires and that decision made all the difference.

Hamilton took the lead after Norris could no longer control his car on the wet track and scored his historic 100th win.  That’s right, win number 100 for Lewis Hamilton.

The quick math shows that Hamilton has more victories than the fourth and fifth drivers on the list combined.  Should he win four more races, he will have more than the third and fourth drivers combined.  That’s not only outstanding, it’s borderline unimaginable.

Yet, for crossing the line first in Sochi, Hamilton holds just a two-point lead (246.5 – 244.5) over title rival Max Verstappen, who managed to take second place.

Sainz, who led early then faded badly, managed to rebound into the third step on the podium after Ferrari also made the smart move of bringing him in early for intermediate tires.

The Race: Lewis Hamilton Wins No. 100

Norris secured the first pole of his career for the Russian Grand Prix in Sochi.  Then, he promptly lost his advantage at the start as the draft on the frontstretch allowed Sainz to move from second to first.

By lap 20, Norris regained the lead and looked to be in a comfortable position to score the first win of his career.  The field shuffled through their stops and the cars that pitted early paid for the move as tire degradation leveled off after the track rubbered in.

This change in conditions allowed Norris and Hamilton to continue on their medium tires and distance themselves from the field.

Fernando Alonso likewise benefitted from staying out and used his track position to cross the line in sixth.  Sainz, who had suffered from the move of pitting early, reaped the benefits of switching to rain tires early and made his way to the front and third.

The race looked like it would run to a quiet finish but the rain brought out a mix of strategies that jumbled the field.  On lap 46, drivers started pitting and no one gained like Valtteri Bottas, who had been languishing outside the points for much of the race.  With wet tires on early, he bounced into the top 10 and surged all the way up to a fifth-place finish.

But it was Norris and his bold decision to stay out on slicks that sustained the biggest blow.  After sliding off the track and losing the lead, Norris realized the trouble he was in and knew pitting was the only option.  His 40-second lead over third evaporated and then he struggled to get his McLaren around the track and into the pits – ultimately missing pit lane entrance, initially, then pitting and earning an admonishment from the stewards.

In what looked like a second-straight race win for McLaren, following Ricciardo’s at Monza, Norris fell from first and into a disappointing seventh.

Hamilton capitalized on the Norris miscue and drove the final two laps without pressure, earning his fifth win of the year.

– It may seem silly to mention this idea but one area where Hamilton excels that is often overlooked is his brilliant race-craft.  His win in Sochi is another example of how he seems to be aware of what is happening and is ahead of everyone else in their thinking.

Hamilton could have easily charged hard in the early stage of the race, crippling his tires and forcing him into an early pit stop. Instead, he seemed reluctant to challenge anyone in front of him.  Hamilton appeared to play to the notion of letting the race come to him rather than forcing the issue.

Later, as rain began to make the track a hazard, he held on for as long as possible but quickly came to realize that worn, hard slicks would not work.  While Hamilton eschewed the call from the Mercedes pit box to pit the first time, it took only one further lap to recognize that pitting for tires was vital.  His move proved to be the difference in claiming the victory.

– Verstappen starting in the back and finding himself on the second step of the podium truly is an early birthday present as the Sky Sports announcers intimated.  That result is better than anyone could have predicted or hoped.  It also keeps the title fight just that much closer with seven races to go.

– If any particular team is struggling with the new “human” element that is part of pit stops, it is Red Bull.  Prior to the changes that came at the midpoint of this season, Red Bull were the par exemplar of excellence for pit lane visits.  The 1.8-second stop the team posted stands as a ridiculous assertion of their achievement.

But now, the mechanics involved in the stop are required to show that they have finished their job, basically by hitting a button on the air gun that signals an OK.

For the second straight race, Red Bull messed their way through the sequence, delivering an 8.9-second stop to Sergio Perez culminating with his fall through the field.  This miscue comes on the heels of a 10-second stop that the team struggled with at Monza, one that dropped Verstappen back and helped cause the issue between Verstappen and Hamilton.  These early results indicate Red Bull is still finding its way with these new regulations, pit stops that are certainly in need of work.

– While it might be easy to challenge Norris and his decision to stay out on slick tires as the track became increasingly wet, such criticism is easily mitigated by considering the decision as one between youth and experience.  Instead, the questionable element here is Lance Stroll and just what the *&%$ he was doing during the final laps of the race.

First, Stroll squeezed his teammate Sebastian Vettel, almost putting Vettel into the wall and ruining both of their races.  Though Vettel carried on, he failed to wind up in the points as he should have.

Then Stroll tangled with Pierre Gasly, spinning out the French driver and earning himself a 10-second penalty for his asininity.  For those efforts, Stroll wound up “helping” his Aston Martin team by ensuring both drivers finished outside the points.  While the FIA might not have called Stroll to the stewards’ trailer, the team will surely have some words with him.

– Lewis Hamilton noted his accomplishment. “Wow… 100!” he said. “It’s taken a long time and I wasn’t even sure the 100th would come! Going to bed last night I wasn’t the happiest with the job I did yesterday. I watched the replay over and over again; they were subtle mistakes but I was so determined to put things right when I woke up this morning.”

– Max Verstappen was well aware of his lucky finish, saying, “I’m super happy of course to be second. If you would have told me this morning that I would come home second today, I wouldn’t believe you. But luckily, the call to go from the slicks to the inters was the perfect one I think, the right lap… [So] super pleased for this.”

– Lando Norris owned up to his mistake. “I don’t know where to start,” he explained. “Obviously unhappy, devastated in a way. I guess we made a call to stay out; we stand by that call but it was the wrong one at the end of the day. I made a decision just as much as the team. In fact it was more they thought I should box and I decided to stay out. So, my decision – I thought it was the way to go.”

Note: Norris scored an additional point for setting the fastest lap of the race. Stroll received a 10-second time penalty for causing a collision.