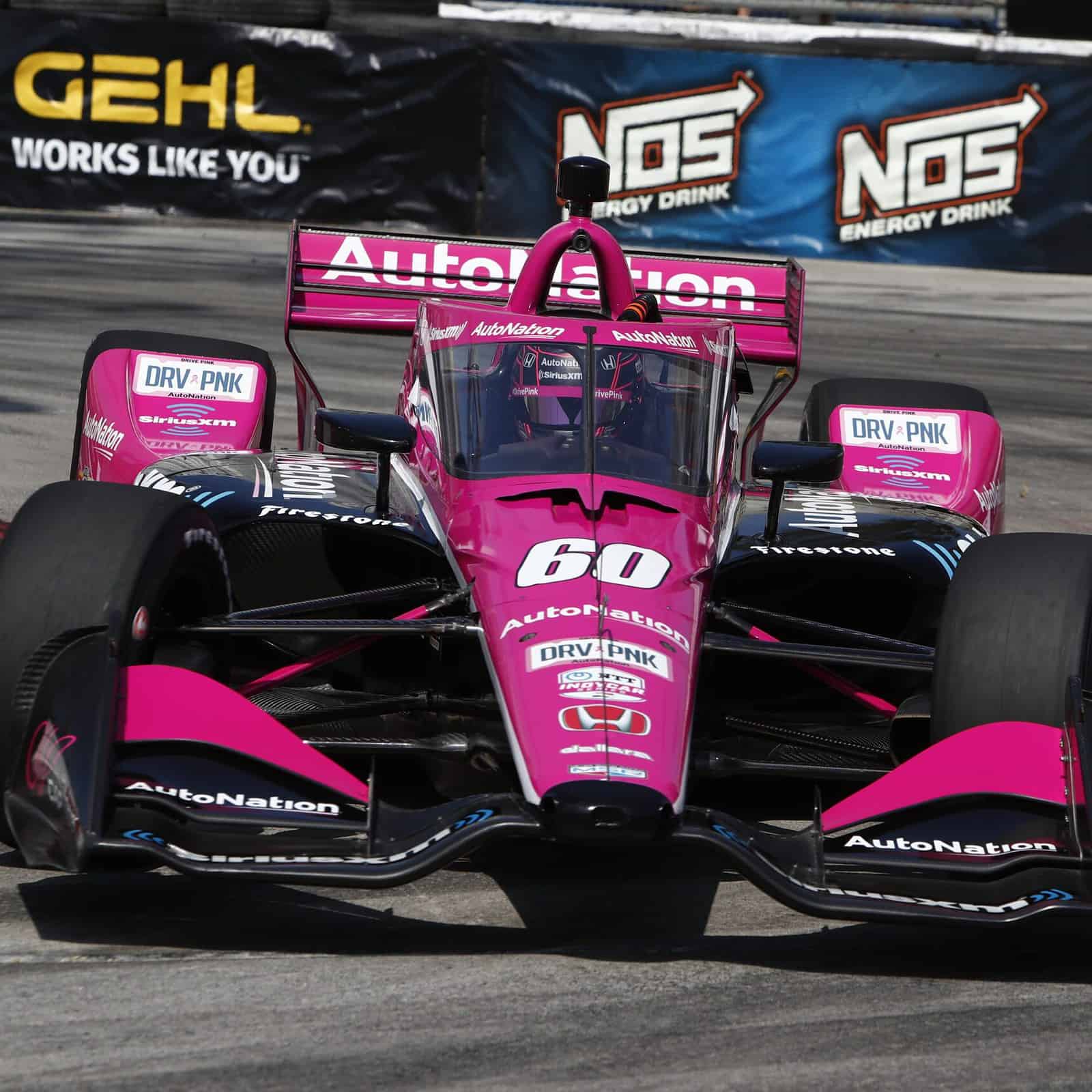 Harvey tried multiple times to speak when a Meyer Shank Racing team spokesperson asked him for a quote for their post-race release, but words failed him on pit road. Sure, the Bassingham, England native climbed from 25th to seventh, an effort that any driver would be proud of. However, Harvey had just made his final start for the team that resurrected his racing career before moving to a yet-unannounced team for a full season drive in 2022 IndyCar competition.

“That’s a really nice way to end our season from P25 to seventh,” Harvey said. “It was a great day and you know, […] I wish we had done more often this season, I think we easily are a top-10 team/driver combination, I’m sad. I’m sad that we didn’t do it more.

“I still love everybody here, I don’t think anyone really understands how difficult a decision it was, you know. It’s still painful to say bye to everyone, it’s such a great team, we’ve got such a great team, such great partners in Autonation and SiriusXM and I feel like I’ve grown as a driver, I feel like the team’s grown, our partners have grown, I mean everything’s just really grown and yeah, our time together has just come to an end.”

After starting 25th, Harvey climbed to ninth place by making his first pit stop later than other drivers, stopping shortly before a full course yellow for Marcus Ericsson’s stopped car in the turn 1 tire barrier.

Staying near the front with a lengthier stint to shorten the last run of the race, Harvey managed to lead one lap before pitting on lap 57. Harvey climbed to seventh place after other cars pitted and remained in that spot for the final 21 laps of the 85-lap race as Colton Herta won and Alex Palou finished fourth to claim his first IndyCar championship.

After getting out of the No. 60 car for the final time, Harvey and team co-owner Michael Shank shared an embrace. Shank took a chance on the 2014 and 2015 Indy Lights championship runner-up to help get his IndyCar organization started in 2017 and Shank’s team-building philosophy paid dividends.

“It’s like a divorce a little bit, but a good one,” Shank said on pit road. “He did great and I think if you look over the four or five years we’ve been together, there’s two people that needed each other at the right time at the right place to get us to where we are today. He had a great run today. He deserves everything today, today was a great day by the team, the strategy, the driver to go from 25th to seventh, and I actually think we could’ve run a little higher than that with a couple of different situations but we’re happy the way it ended.

“It’s like family separating, so it’s weird, but I think history will go back and look at this for a couple of years and history will tell us where we all ended up here.”

After an abortive effort to get an IndyCar program together in 2012, Shank was always looking for a way into IndyCar when fate intervened. Harvey finalized a deal with Andretti Autosport to do the Indianapolis 500 in 2017 when Formula 1 world champion Fernando Alonso came to the team asking about a ride for the 500 with McLaren backing. Worried about possibly losing the ride, Harvey and Shank partnered up for the Indianapolis 500.

Even more remarkable was the fact that Harvey was even in a race car in the first place. After losing the 2014 Indy Lights championship to Gabby Chaves in a second place tiebreaker and the 2015 Indy Lights title to Spencer Pigot in the last race weekend of the year in Laguna Seca, Harvey spent 2016 looking for a ride with none to be found. His career seemed to be over.

But in a flash, it wasn’t. Harvey’s 2017 Indianapolis 500 was short lived, but the following year Harvey did six races for the newly-rebranded Meyer Shank Racing after SiriusXM CEO Jim Meyer joined the team as a co-owner.

Harvey scored the teams’ first podium finish in 2019 at the Indianapolis Motor Speedway road course, a result that brought Shank to tears on pit lane. Harvey and Shank never claimed a victory or a pole position together, but the pink and black machine did have a few front row starts to its credit and some top-five finishes to boast about.

While Simon Pagenaud will drive the No. 60 car in 2022, Harvey isn’t exactly on the sidelines. The 2012 British Formula 3 champion did reiterate that he has a signed full season contract to drive in IndyCar in 2022, but he has not divulged the team he’ll drive for. Still, Harvey will always be part of the Meyer Shank family, fighting through layer after layer of emotion to make his feelings felt after gaining the most positions he ever has in a race.

“Saying bye to these guys is fucking hard,” Harvey said. “You know, we’ve been through so much together and I tried to not think about it before the race, because otherwise I would’ve gotten emotional then as well and you know jumping into the car for the final time, I don’t consider it like really final but you know, more final maybe, you know I just wanted to have a great day and I’m super excited for the future and just a lot of emotions to process, honestly. I don’t know how I feel, really.

“Michael, (MaryBeth Shank), Jim Meyer, all the Meyer family, Mark Cannon and his family, Richard, Jennifer, SiriusXM, I don’t just owe a thank you to [them], they saved my career.”