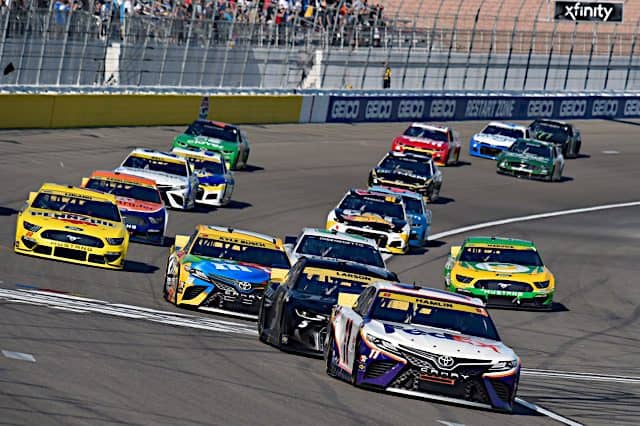 Joe Gibbs Racing driver clinches spot in Round of Eight

With 30 races in the books, the championship is in sight and we have a good idea who will probably be fighting for it at Phoenix. But it takes so much going right and not just piling up stats. Kyle Larson essentially rolled snake eyes on Sunday, but for championship rival Denny Hamlin, the only pair of ones he saw were the numbers on the side of his race-winning Toyota. Pit strategy kept Larson from what would’ve been his second straight victory and left the Hendrick Motorsports star mired in 10th place at the finish.

Now, Hamlin will be the only playoff driver without a black cloud of dread hovering over him prior to next week’s race at Talladega. That’s probably the best news for the veteran contender. After all, he has two wins and a runner-up finish in his past four starts. It’s a stark turnaround after zero wins and only one runner-up finish in the first 26 events this year. No track can squash momentum as unpredictably as the 2.66-mile Alabama behemoth, so the Vegas win was as timely as any in Hamlin’s career to this point.

That said, here we do stats, and we’ve got a few more notable numbers from Sunday evening’s South Point 400 in Las Vegas.

Hamlin didn’t reach victory lane until the 27th race of 2021. Typically, eventual series champions pick up their first win of the year much earlier in the season. If Hamlin should manage to claim the series crown, he would tie the record for the latest first win set by in 2011 by Tony Stewart. Stewart also picked up his first Cup triumph in the 27th race of that year, adding four more checkered flags to his total en route to his third Cup Series championship.

Hamlin has led 545 of the 1,534 laps run in the four playoff races. That’s 35.5% of the postseason that Hamlin has shown the way. He’s also won at least one stage in each of the four.

Speaking of leading laps, Larson finished the race on Sunday with a total of exactly 2,000 laps led in 2021. No driver has surpassed the 2,000 laps led mark since Martin Truex Jr. and Kyle Busch both did so in 2017. Not to mention, Truex and Kevin Harvick in 2014 are the only champions to lead that many laps in the past 12 years.

Tyler Reddick picked up his 14th top 10 of the year with his sixth-place finish. Oddly enough, only two of those have been top-five results. It’s probably not enough to make up for the sting of his first-round elimination, but his season has been one of the more surprising from a positive standpoint. No driver has earned 14 top 10s in a year in a Richard Childress Racing Chevrolet since 2015 (Ryan Newman).

Las Vegas was one of the few venues on which Hamlin had yet to capture a Cup win until Sunday’s visit. He remains winless at seven active tracks, and in all fairness, he’s only gotten one attempt at Road America, Circuit of the Americas, Nashville and the Daytona Road Course. The other three that he’s still chasing? Sonoma, Charlotte, and Indianapolis.

While surviving Talladega unscathed is probably at the forefront of most playoff drivers’ minds, perhaps winning shouldn’t be. Since 1995, only three drivers have won the series title and a race at Talladega in the same year. Jimmie Johnson in 2006, Brad Keselowski in 2012 and Joey Logano did it in 2018.

The top four finishers in both the Xfinity Series and Truck Series races at Las Vegas were teammates, the first time that two of the three national touring divisions of NASCAR had one team sweep the top four positions on the same weekend. Interestingly enough, for a while, it appeared possible that it would happen in the Cup event too. Both Hendrick Motorsports and Joe Gibbs Racing had portions of the race where all four of their drivers were in contention, but late-race issues dropped HMS wheelman Alex Bowman and JGR standout Christopher Bell to mid-pack finishes.

Remember when people said a TV rating of 2.something was a disastrous weekend for a cup race?
Now we see more and more in the 1.something area. These are incrementally better than whatever positive way to spin it, the sport is hardly rebounding is it?
Still there is money to be made business to business and I guess that’s enough.