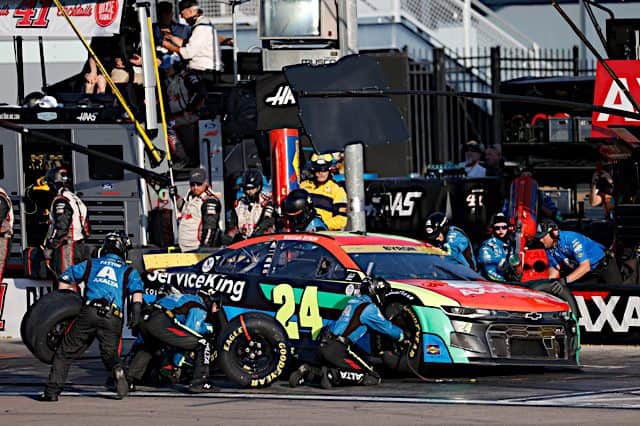 William Byron had to dig deep at Bristol Motor Speedway to pull himself above the playoff cut line and advance to the Round of 12.

But another round has brought another points hole for Byron to crawl out of after a night of missteps that led him to an 18th-place finish at Las Vegas Motor Speedway, now four points beneath the cut line entering Talladega Superspeedway.

The fourth-year driver for Hendrick Motorsports began Sunday night’s (Sept. 26) Round of 12 opener already at a disadvantage, forced to start from the rear following two pre-race technical inspection failures.

The No. 24 Chevrolet had blazing speed though and stormed to the lead by lap 92. Byron’s hot start, though, was short-lived.

A caution at lap 93 for Joey Gase’s vicious Turn 2 crash upended strategy in stage two: The window opened for teams to pit and make it to the end of the stage on fuel, but neither Byron nor his Hendrick teammates capitalized on the opportunity while most of the field pitted.

See also
5 Points to Ponder: Las Vegas a Quiet Start to Round of 12

On the ensuing green-flag run, Byron’s pit stop was so disastrously slow after changing just right-side tires that crew chief Rudy Fugle had to audible and call off changing left sides.

Soon after, Byron found himself one lap down and fighting for the free-pass position.

Big trouble on the right front for @WilliamByron so they called an audible and went for 2, not 4 tires.

Team confident they're still in it.

Lots of confusion on the 24 radio. @WilliamByron just found out he was lapped — team is trying to keep a positive outlook and pump the driver up.#NASCAR

Byron indeed received the free pass to get his lap back at the conclusion of stage two, but his issues weren’t over. After driving back into the top 10, Byron suffered a flat right-rear tire, forcing him to pit under green. Byron eventually finished 18th, one lap down.

“I thought we were really fast,” Byron said. “We came from the back to the front, took the lead and then obviously had that caution. I chose the wrong lane there and had to run second there for a while to Kyle [Larson]. And then we had the strategy deal with not being able to make it on fuel and had to recover from that. We had to take two tires and that hurt us. We were able to drive all the way back to the front from the back again, so that was twice today. And then we had the flat tire.”

This points deficit is far too familiar for the No. 24 team. In the opening round of the playoffs, Byron couldn’t avoid teammate Alex Bowman at Darlington Raceway, tearing up both cars before Byron later pounded the wall with a right-front tire failure.

That was followed by a miserable performance at Richmond Raceway where Byron was a complete non-factor and finished 19th, two laps down.

The team’s lone bright spot in these playoffs came at Bristol, where Byron put together a fantastic run that brought him home third at the checkered flag.

And while the team’s issues at Darlington were largely the result of circumstance rather than the team’s own doing, the performances and flat-out mistakes at Richmond and Las Vegas highlight what a championship program cannot afford while hunting a title.

What those setbacks can do, however, is build resolve. How much does that matter for Byron and Fugle mentally? Perhaps that’s hard to say.

Whatever character-building moments they have experienced so far will be put to the test over the next two weeks. These next two tracks — Talladega and the Charlotte Motor Speedway ROVAL — are the two biggest wild-card tracks left in the playoffs.

At ninth place in points and four back of the cutoff, Byron isn’t in desperation mode quite yet. But missing out on stage points, wrecking out or doing both could easily lead Byron into a must-win situation at the ROVAL. And despite being a good superspeedway racer and an improved road-course driver, chaos knows no bounds at either facility.

There is an adage somewhere that says sometimes you have to lose a title before you can win a title.

So far, Byron and his No. 24 team are not championship favorites, but they may be learning how to lose a title before they win one.