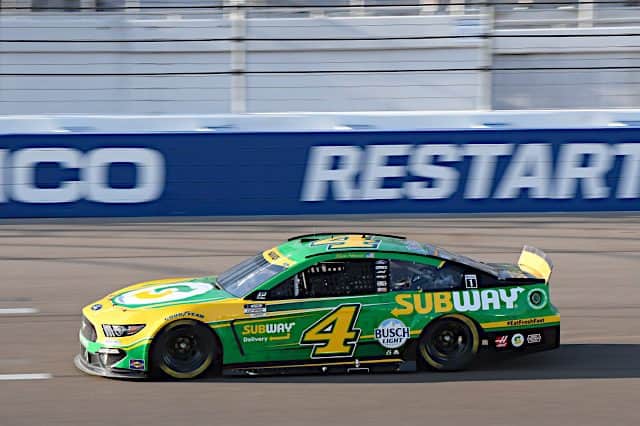 Kevin Harvick‘s crew chief Rodney Childers has been suspended from this weekend’s event at Talladega Superspeedway on Sunday Oct. 3 after two loose lug nuts were found on the No. 4 Stewart-Haas Racing Ford during post race inspection at Las Vegas Motor Speedway. Childers will be replaced by crew chief veteran Greg Zipadelli.

Childers has been fined $20,000 in addition to his suspension.

The No. 4 wasn’t the only Cup playoff team that was fined; the No. 5 of Kyle Larson and the No. 18 of Kyle Busch were also guilty of improperly installed lug nuts. They were both found to have one each. Ben Beshore of the Joe Gibbs Racing Toyota and Cliff Daniels were each fined $10,000. Busch and Larson finished third and 10th, respectively on Sunday night.

Future Trackhouse Racing teammates Daniel Suarez and Ross Chastain also both were caught with one loose lug nut each. Both the No. 99 team’s Travis Mack and the No. 42 of Phil Surgen were also fined $10,000 each.

Xfinity Series race winner Josh Berry was caught with one unsecure lug nut on the No. 1 Chevrolet that is usually driven by JR Motorsports driver Michael Annett. Crew chief Mike Bumgarner was fined $5,000.

These fines and suspensions are way to excessive for the violations. On the other hand, you can intentionally wreck someone with no penalty at all.