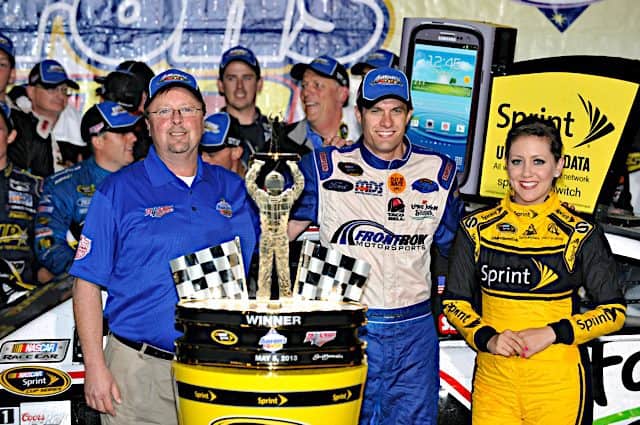 Did You Notice? … Talladega Superspeedway has always been labeled the best track for winless NASCAR drivers to pull an upset? The 2.66-mile oval has a history of pulling off one-hit wonders, from Richard Brickhouse winning his first and only NASCAR Cup Series race there in 1969 to Ron Bouchard pulling off this three-wide thriller in 1981.

Lately, we’ve settled into a four-year groove of Talladega providing a little more shock-and-awe than usual. Here’s a recent, Olympic-like timeline of surprises.

May 2013: David Ragan earns the first NASCAR victory in Front Row Motorsports history, pulling off one for the underdogs with a little drafting help from teammate David Gilliland.

May 2017: Ricky Stenhouse Jr. is the latest to win his first career Cup event at this track, winning from the pole for Roush Fenway Racing. (Both Stenhouse and RFR have only won one more race since.)

Can this weekend continue the pattern? There’s a good half-dozen drivers on the entry list in position to produce another first (or, in one case, last) victory that takes the focus off 24/7 NASCAR playoff talk for a minute.

Who’s got the best shot? Your top candidates are listed below along with their current odds from MGM as of Tuesday, Sept. 28.

Bubba Wallace (+2500): Three of Wallace’s five career top-five finishes have come at the other pack racing track: Daytona International Speedway. That includes a runner-up performance in August, avoiding last-lap carnage while good buddy Ryan Blaney took the win. His first-year 23XI Racing team has circled these types of tracks on the calendar as places where they can catch up a little faster to the teams above them.

Talladega hasn’t been as friendly to Bubba. He’s without a top-10 finish here in seven starts, known more for NASCAR’s noose-that-wasn’t and his fellow drivers rallying behind him in solidarity last summer.

But Wallace has a real shot to change that this weekend. The No. 23 Toyota has led 25 laps this season at Daytona and Talladega, putting himself in position to win all three times. The question is whether the smaller, five-car full-time Toyota group can withstand the onslaught of dozens of Ford and Chevy drivers working together effectively. That’s how the Fords have captured all three pack races so far this year, pairing the right strategy with staying disciplined inside the draft.

Matt DiBenedetto (+2500): The music is close to stopping in NASCAR’s Silly Season musical chairs, and Matty D still doesn’t have one. His Wood Brothers Racing ride goes to Harrison Burton next season, and a full-time Cup opportunity looks increasingly unlikely for the 30-year-old.

DiBenedetto remains wildly popular among the fan base. But to be fair to his soon-to-be-former employers, he’s had nearly two seasons in Team Penske satellite equipment and failed to reach victory lane. A career 0-for-242 at the Cup level, a victory would do wonders to remind car owners what he’s capable of in a year where his stock has started dropping.

Ryan Newman (+3300): Wait, I thought this column was about potential first-time winners? Newman has 18 career Cup victories, the last of which came back in 2017 at Phoenix Raceway.

But this veteran also sees Father Time checking his watch, getting impatient as the cold reality hits that these may be the last six races of Newman’s full-time Cup career. Popularity aside, no one’s seeking a 43-year-old sitting 27th in the standings, falling some 250 points short of a playoff bid this year. He’s only earned two top-five finishes since going from potential 2020 Daytona 500 winner to miracle crash survivor.

Doesn’t it kind of feel like this track type owes him? Newman has led just four laps all season, all of them here or at Daytona, where he ran third in August. RFR has focused on these tracks in recent years as they’ve slipped off the pace of top-tier programs; their only victories since 2015 have come here and at Daytona. Wouldn’t it be something if Newman could give the No. 6 its first victory in over a decade, a worthy handoff to fellow Penske alum Keselowski in 2022.

Ross Chastain (+4000): Chastain has cooled off as of late after starting the NASCAR playoffs with a third at Darlington Raceway. However, the No. 42 Chip Ganassi Racing team is still plenty capable and has nothing to lose here considering their impending merger with Trackhouse Racing Team after the season. 50+ employees are set to lose their jobs, making win-or-bust a lot easier strategy to stomach in the short-term.

The issue with Chastain at this track type is his aggression sometimes gets him in trouble and/or hung out to dry in the draft. Can he play nice long enough to make friends in crunch time?

Ryan Preece (+5000): Preece is another driver with no ride for 2022 and paired with a team, the No. 37 of JTG Daugherty Racing, that has nothing to lose as it will cease to exist come November (JTG is only keeping one car, the No. 47 driven by Stenhouse, operational next season).

Both career top-five finishes for Preece have come at this track type, including a third at Talladega in the spring of 2019. He’s got a knack for drafting and has had Lady Luck on his side, averaging an 8.0 finish in pack races this year.

Daniel Suarez (+5000): Suarez is part of the Trackhouse team that’ll take over CGR’s assets in 2022, making a surprise push for the playoffs in early summer. But just one of his career top-10 finishes have come at Talladega, way back in 2018, and he’s never won at this track type in any other NASCAR series.

Chase Briscoe (+5000): The rookie nearly won at the Indianapolis Motor Speedway road course in August. Briscoe’s Stewart-Haas Racing equipment is some of the best of the biz at this track type. It’s just his goal in this race may be different, more of a supporter of lone SHR driver Kevin Harvick than being tasked with a charge to the win himself. If Harvick is in contention with his teammates, after the stunt pulled at Bristol Motor Speedway two weeks ago with Hendrick Motorsports, what does SHR do?

Corey LaJoie (+6600): LaJoie is driving for a Spire Motorsports team that’s pulled off the upset of all upsets in pack races, Justin Haley’s rain-shortened win at Daytona due to pit strategy two years ago. LaJoie himself had a shot to win Daytona in August if all the chips had fallen his way and has collected four top 10s at these tracks since 2019. He’s a phenomenal plate racer.

A top-10 finish is a little different from a win, though. That’s where the difficulty lies with a car that may not have the total package to get out front and stay there all that long; timing of the pass has to be picture perfect.

Justin Allgaier (+10000): Allgaier’s in the same boat as LaJoie, making a rare Cup start for Spire Motorsports in the No. 77. Considering the equipment, chances are slim, but it would be nice for the racing gods to cut Allgaier a break after everything went wrong in his one-race stint subbing for Jimmie Johnson last year in Indianapolis.

2021 – All the playoff drivers are caught up in the big one before the end of the first stage. None of them finish the race. NBC doesn’t know what to do because they can’t dwell on playoff drivers and the points/bubble. Fans get to watch the race in silence. An unchartered driver wins. …..That would be cool.

Yes, I hate the 550 package. I should stop watching those races.

I was at Oswego Speedway when the announcer said that Modified driver Ron Bouchard had won the race at Talladega.

In memory of Ron Bouchard: