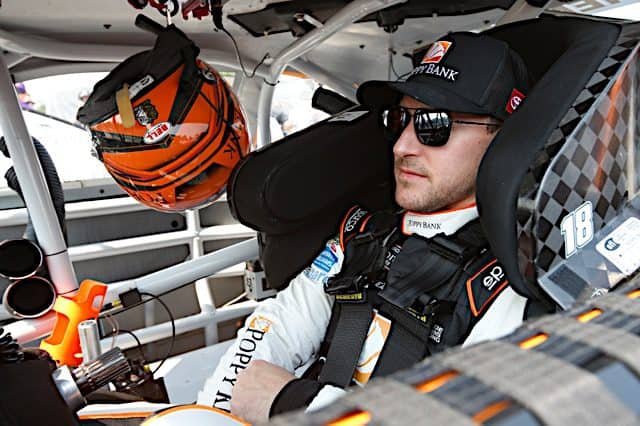 Starting in 2022, Daniel Hemric will be the new driver of Kaulig Racing’s No. 11 Chevrolet in the NASCAR Xfinity Series. Hemric will replace Justin Haley, who will drive one of the organization’s Cup Series cars in 2022.

Hemric’s career has been an interesting one as he has proven consistency but has yet to find victory lane in his NASCAR career. There were a few drivers available that Kaulig Racing could have went with to drive its No. 11 car but decided on the 29-year-old from Kannapolis, North Carolina

Did Kaulig Racing make the right move in hiring Hemric? The choice is one that Luken Glover and Clayton Caldwell debate in this week’s 2-Headed Monster.

It’s Best for Both Parties

Mark Martin and Denny Hamlin both get the recognition as great drivers who never won a championship (while Hamlin still has a very good chance to win his). Daniel Hemric should be recognized as a good driver, but the glaring absence in the win column between all three of NASCAR’s national touring series overshadows it. So let’s just go ahead and say what nearly everyone likely thinks when they hear the name Daniel Hemric: yes, he hasn’t won … yet.

Focusing on the NASCAR Xfinity Series, he’s come as close as you can without finding victory lane. Hemric has nine runner-up finishes in his Xfinity career. Only Dale Jarrett holds more runner-ups (10) before his first career win. Jarrett went on to win 11 Xfinity races and became a champion and Hall of Fame Cup Series driver. Does that mean Hemric will experience the same thing? No, but it’s good company to be in with.

The first key to showing this was the right move is to look at it from a statistical perspective. Yes, stats don’t give the whole story and shouldn’t be looked at alone, but they give a wealth of knowledge into a driver’s career. In 114 starts, Hemric has scored 40 top fives, 67 top 10s, 1,030 laps led and a 12.3 average finish. Those aren’t just OK statistics; they are really good.

Stats can only tell part of the story, so why else was Hemric the best option? Since it was known that Kaulig Racing would have an opening, fans and analysts have naturally given their suspects for who would get the ride. Matt DiBenedetto has been quite a popular choice, with it going as far as people spreading rumors that Kaulig had signed the popular driver.

The news floating around that I signed with Kaulig Racing for next year is false. Not sure how the rumor got started but I keep getting a ton of texts about it so I had to clear that up. I’ll tag @bobpockrass so he can help spread the word so I quit getting texts ?

While he hasn’t won, Hemric has been to the Championship 4 in the NXS twice. He knows how to get through the playoffs, and it can be argued that if it weren’t for a mechanical issue in the 2017 championship race, he had the best car of the championship drivers. Add on his truck and Cup experience combined with his consistency, and you get a driver who is well-rounded. Don’t forget too, he nearly beat Kyle Busch straight up at Atlanta Motor Speedway in July.

That was enough to attract Kaulig Racing’s attention. This makes sense for both sides. Kaulig has taken a chance on drivers who have been around a while who are looking to take that next step. Look no further than their own drivers in AJ Allmendinger and Jeb Burton. Or how about the step for Ross Chastain to propel his career? Hemric has had success with Chevrolet before, brings consistency, and consistently runs with or outruns the Kaulig cars now. Kaulig believes it can take Hemric to that next level of finally winning, and that potential chemistry makes him the logical choice. — Luken Glover

Kaulig Could Have Done Better

There were better options for Kaulig Racing to hire for the No. 11 car in 2022. While I think Daniel Hemric has proven that he can be a consistent top-five racer in the NASCAR Xfinity Series, he has yet proven that he can be a legitimate contender for the championship. There are other drivers who would have been better hires than Hemric.

Hemric has been running pretty much full-time in some national division of NASCAR since the 2015 season. He has done well since he started, but for the last few seasons, one consistent thing has been said about him: people are waiting for him to take the next step and win races on a consistent basis. He’s made 202 starts over NASCAR’s top three divisions and has yet to record a single victory. Equipment or lack thereof is not an excuse in this case.

In 2016, Hemric drove for Brad Keselowski Racing in the Truck Series — a top-tier operation at the time. In 2017 and 2018, he drove in the NASCAR Xfinity Series for Richard Childress Racing, a championship caliber ride. He moved to Cup for RCR in 2019, but in 2020, he drove for JR Motorsports in the Xfinity Series, which is a very competitive team and this year finds himself driving the No. 18 for Joe Gibbs Racing.

If you ask many who the best team is in the NASCAR Xfinity Series, the majority of people will point to JGR. Since the start of the 2007 season, JGR has won 177 races in the Xfinity Series. Sure, a lot of those wins have come with Kyle Busch behind the wheel, but there have been other names to win for JGR as well.

All the names I mentioned were young drivers still trying to find their way in NASCAR. They weren’t established veterans. That’s why it’s alarming to me that Hemric has failed to win a race in 27 starts this year for Joe Gibbs Racing.

Being young and inexperienced are no longer excuses for Hemric. Including 2021, he has run the better part of three seasons in the Xfinity Series for well established teams and has yet to find victory lane. It’s the next step in his progress, but one that he has yet to reach and now makes you wonder if he will ever get to that point.

When I look at a few of the other options that are out there, I wonder if Kaulig Racing would have been better off handing their No. 11 car to another driver. One name that is currently without a ride and I feel may have been a better option is Ryan Preece. While Preece’s tenure in Cup has been lackluster, JTG Daugherty Racing’s equipment doesn’t often provide opportunities for Preece to thrive.

Recently, JTG Daugherty Racing announced that the team will be a solo car operation for 2022. That leaves Preece without anything concrete for next season. His resume in the two lower divisions of NASCAR is more impressive than Hemric’s. He has two wins in just 59 starts in the NASCAR Xfinity Series and one win in just two starts in the Truck Series. If he was hired to drive the No. 11 car next season, the team would immediately become a championship contender. In order for that to be the case with Hemric, he still has some growing to do.

Another option the team could have pursued was Brett Moffitt. Moffitt’s success in the NASCAR Camping World Truck Series is remarkable, winning 12 races in 90 career starts in that division. Moffitt’s yet to have an opportunity to win a championship in the NASCAR Xfinity Series, but he’s proven without a doubt that whenever he gets into winning equipment, he does just that. His current NASCAR Xfinity team, Our Motorsports, has built itself into a competitive organization but it’s not anywhere near where Kaulig Racing is. Hiring Moffitt would have put them in as one of the favorites for the championship. I am not sure Hemric does that right now.

In the end, there are clearly better options Kaulig Racing could have gone after for its No. 11 Chevrolet. Sponsorship and the amount of money that is being brought to the ride may have a major impact on this decision. However, from a competitive standpoint there were other options the team could have signed that would have given them a better chance at a championship. — Clayton Caldwell

If I were an employer I’d be asking why this guy never gets re-signed if his stats are so impressive. I agree that putting Ryan Preece in that car would be good / better for both parties than Hemric or the tired act of DiBenedetto.
A successful year in Xfinity would demonstrate that Preece was in an inferior car and could set him up nicely for a top end ride in 2023 if any are available.

I was hoping they would have gone with a younger driver or someone who has won or drives well in underfunded equipment. But as usual money wins out. Sad for the sport.

In a word, “No!” But as usual, Joe Gibbs is running drivers off by trying to buy wins and championships for his grandson, Ty. He should be ashamed.

It doesn’t matter if there were more talented options available when those options don’t bring the millions that Hemric does with Bill Gallher’s checkbook. Obviously with the loss of NutrienAg coupled with moving to Cup Kaulig didn’t want to self-sponsor the 11 anymore (especially without the Braun family to partially subsidize it) so they found the best funded driver they could.

In Hemric they get both consistent results and a consistent 6 figures per race in sponsorship…what’s not to like?

What about Ty Dillon? He would bring in RCR support.