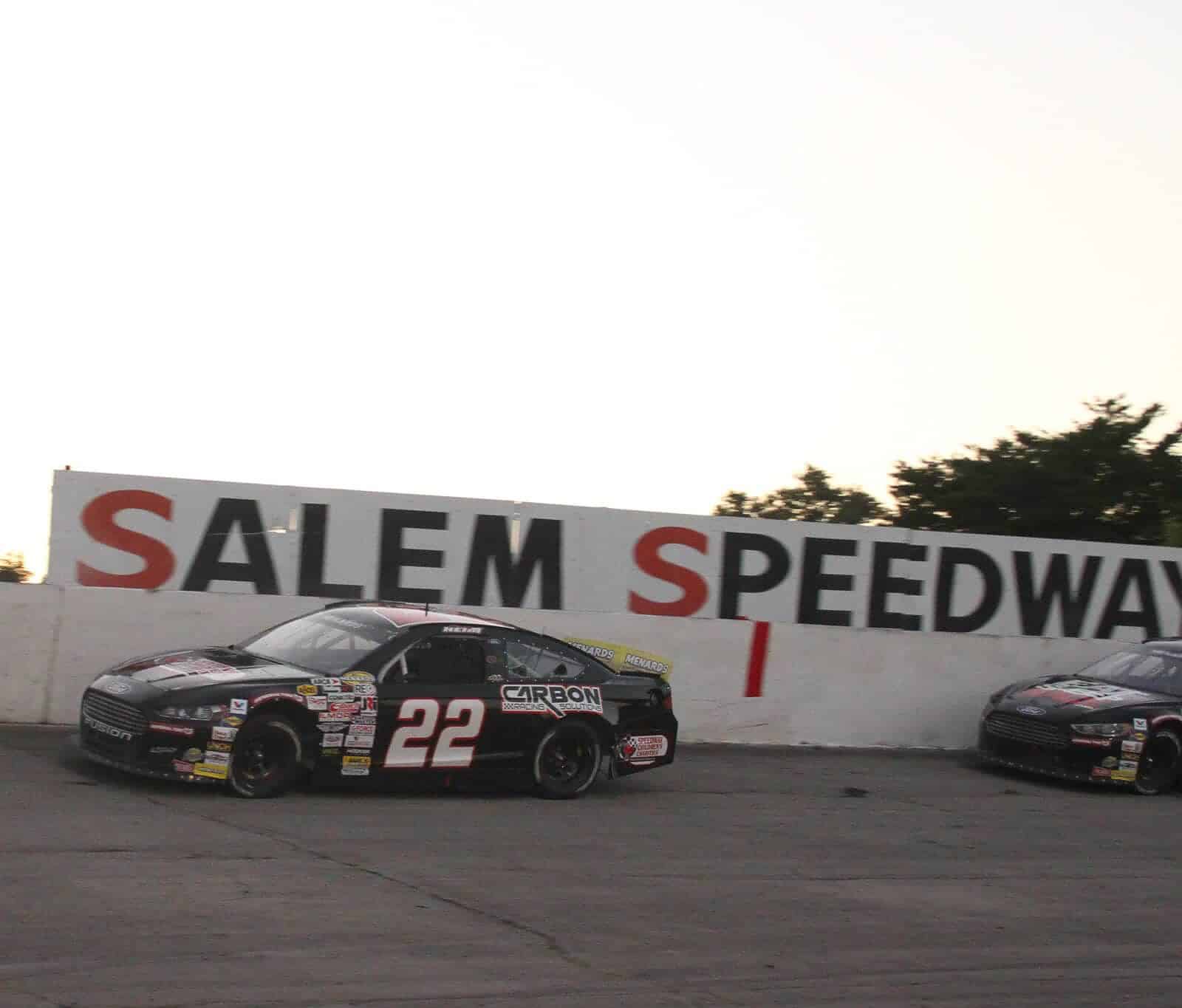 One championship down, two to go for Joe Gibbs Racing in 2021 ARCA competition.

The 19-year-old Venturini Motorsports driver sits only 26 points behind Gibbs in the series standings and only 17 points back of the No. 18 team in the Sioux Chief Showdown standings.

This Sioux Chief PowerPEX 200 at Salem has 18 cars on the entry list, which means Gibbs only has to finish 17th or better to clinch the Showdown title.

Yet, at such a close-quarters combat short track with such a small field, it only takes one small mistake, one wrong-place-wrong-time accident for the soon-to-be 19-year-old Gibbs, and suddenly the championship battle is alive for the No. 20 team.

This also might be a good time to mention that the two championship rivals still have unfinished business after what happened at Winchester Speedway earlier this year.

Heim’s Salem ARCA career sees two top fives in two starts, which is nothing to mock. Except one of those top fives came at the last ARCA race held at Salem in 2019 and resulted in a third-place finish — behind a victorious Gibbs.

While Gibbs certainly has a great chance of clinching the Sioux Chief Showdown title this weekend, he’ll have plenty of competition when it comes to the rest of the field gracing the final short track race for the series this year.

One of whom is rising David Gilliland Racing star Taylor Gray.

Gray has won back-to-back ARCA Menards Series West races, at Portland International Raceway and then at the Bullring at Las Vegas Motor Speedway. At Portland, Gray charged back to the front after going a lap down, then won controversially after both leader Jake Drew and Eric Nascimento were penalized for cutting the first corner on the final lap.

Um … WOW@TaylorGray17_ is credited with the win after ARCA officials rule both Jake Drew and Eric Nascimento missed a corner on the last-lap restart ?@Portland_GP | @_TrackPass pic.twitter.com/wtLfpgm3Tj

At the Bullring, however, Gray took the checkered flag in Sin City after leading 123 of the 150 laps. Moreover, he celebrated in victory lane while his team owner David Gilliland served his one-race suspension at that race.

The West Series’ short track race gave Gray plenty of practice and confidence going into this weekend’s race at the 0.55-mile circuit in Salem, Indiana.

Not that he needed it. After all, out of Gray’s 20 starts on ARCA Menards Series short tracks, he’s had 15 top fives.

While Gray has been successful, albeit without a main ARCA series win, in his young career, his DGR teammate is a fresh face in the ARCA garage.

Enter DGR’s newest driver of the No. 46 Ford — JP Bergeron.

The Canadian Bergeron will make his first start in the ARCA platform. He earned this opportunity at Salem after impressing team owner Gilliland earlier in the year in a late model.

“We had the chance to see Jean-Philippe Bergeron perform on the oval track at the World Series of Asphalt at New Smyrna in February, and we are very happy to have him with us to finish the 2021 season,” Gilliland said in a press release.

Bergeron will pilot the No. 46 both at Salem and Kansas, replacing its usual driver Thad Moffitt.

“It is an honor to be able to drive for one of the best developmental stock car teams in the United States,” Bergeron said. “You only get one chance to make a good first impression, and I intend to give it my all to impress those who have encouraged and supported me over the past few years.

Among those on the Salem roster is Landen Lewis, who is returning to ARCA competition for the first time since he earned his first career win at DuQuoin State Fairgrounds in only his second career start. The conquering hero of Illinois will be aboard the No. 30 Ford this weekend.

Excited to be back in an ARCA car this weekend. Thanks to everyone this made this possible for me! https://t.co/4odk7nWsdD

Lewis isn’t the only driver returning to ARCA after a successful race at DuQuoin, however.

Schrader, whose most recent ARCA win came at Salem in 2015, returned to ARCA competition in DuQuoin this year after a two-year hiatus and finished third.

For his second series start in 2021, Schrader returns to a familiar site where he’s earned 11 top fives in 13 starts including two wins in 1999 and 2015. Schrader’s success spans multiple racing genres and disciplines, including being a former USAC Silver Crown Champion.

That’s an honor he has in common with a fellow ARCA competitor this weekend – Kody Swanson.

Swanson, like Schrader, is a common name thrown around the short tracks of America, and it usually ends with him winning some trophy.

Swanson is approaching his sixth USAC Silver Crown title this year which would extend his own series record of five. In addition, Swanson made primetime television this Summer when he raced alongside Tony Stewart in his Superstar Racing Experience series at Eldora Speedway. He finished second to the three-time NASCAR Cup Series champion and turned many heads in the process.

Now, he has been added to the GMS Racing crew this weekend at Salem where he’ll pilot the No. 21.

It was a deal that came to be after GMS Racing owner Mike Beam was paired with Swanson during his SRX tenure in 2021.

“I am really excited and grateful to have an opportunity to race with GMS Racing, and to continue pursuing different avenues with my career. This whole deal started with the opportunity to compete in the SRX Series earlier this year,”  Swanson said in a press release. “We were paired together by the series, and he would be my crew chief for the race. We ended up just one spot short that night, but it started a conversation and relationship that has led to an opportunity like this”

Swanson has five wins at Salem in a Silver Crown car and even won in his first start in the ARCA/CRA Super Series there earlier this year.

“I’m looking forward to going to Salem Speedway. I have never driven an ARCA car there before, but I’m encouraged to have had some experience there with the USAC Silver Crown series, and the ARCA/CRA Super series. I hope that I’m able to adapt well enough to these new cars to do a good job.”

There’s little doubt he will, lest we forget his first ARCA Menards Series start is not this weekend, but at Iowa Speedway last year where he finished eighth.

There was also a time when ARCA used Salem as a host for the throwback weekend before the COVID-19 pandemic. While most won’t be donning familiar paint schemes this year, there are still those who will use the weekend to honor past legends.

One such individual is Ed Pompa, who is honoring ARCA racing legend Frank Kimmel this weekend.

The ARCA race at Salem is this weekend and we already have our first throwback, Fast Track Racing's #10 Car will do Frank Kimmel Menards Throwback#ARCA pic.twitter.com/3g0UCNriqO

Pompa will fly the bright yellow Menards colors of the 10-time ARCA Champion this weekend, two years after he paid homage to NASCAR legend Darrell Waltrip at the same track.

“I got some comments after the 2019 throwback, that throwbacks for the ARCA race should be ARCA-themed,” Pompa told ARCA. “OK, I get it, so I went with the ARCA driver with the most wins and most championships.

“This year’s throwback, although not as impressive as the 2019 DW chrome car recreation, is definitely bright,” Pompa said. “(Car owner and spotter) Andy Hillenburg should have no problem finding me on the track, even if the power goes out.”

Pompa and the rest of the field will be racing 200 laps at Salem. The Sioux Chief PowerPEX 200 will begin at 8 p.m. ET. with TV coverage provided by MAVTV and available on TrackPass on NBC Sports Gold.

No worries for Joe and his grandson, Ty. Money will get you anything you want, no matter that Ty isn’t learning how gratifying it is to scrape and claw his way to the top. They should be ashamed.

Please enlighten me why JGR & Ty Gibbs should be ashamed for 10 wins. Yes, it’s a well-funded team, but money doesn’t guarantee wins. How many wins did Riley Herbst have in the No. 18, Natalie Decker in the No. 25, & Hailie Deegan last year? It still takes talent.