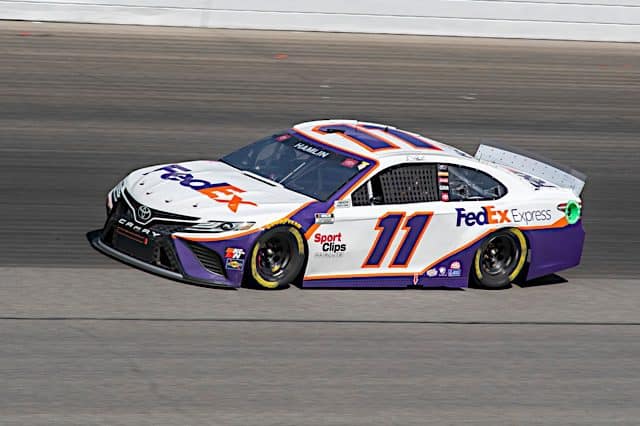 Denny Hamlin will roll off pit road from the pole position in the NASCAR Cup Series race at Talladega Superspeedway.

The No. 11 Joe Gibbs Racing driver is locked into the Round of 8 after winning at Las Vegas Motor Speedway last week.

Teammate Kyle Busch joins Hamlin on the front row in second, while Hendrick Motorsports’ Chase Elliott begins in third. Ryan Blaney wheels his No. 12 of Team Penske from fourth and Elliott’s cohort Kyle Larson rounds out the top five.

Alex Bowman and Christopher Bell are the final two playoff contenders in 11th and 12th, respectively. All NASCAR drivers competing for a championship will start in the front.

The starting lineup was set via an equation that measured a driver’s performance from the previous race (in this case, Las Vegas). The driver’s and car owner’s finishing position from Las Vegas are multiplied by 25% each, 15% for the driver’s fastest lap ranking and 35% for rank in team owner points.

NA$CAR, per Emperor Brian’s vision, has found a way to get the chosen 16 at the front of the field. Tthen the chosen 12, the chosen 8 and the Focused 4. They will never go back to qualifying.