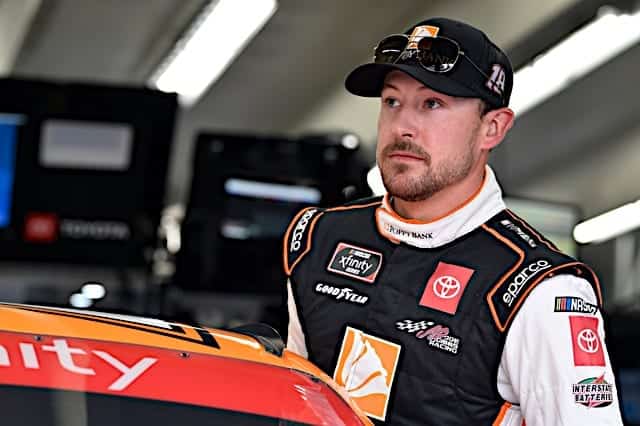 Stop me if you’ve heard this before.

Daniel Hemric will drive for a new race team next season.

Last week brought the news that for the third consecutive season, the 2019 NASCAR Cup Series Rookie of the Year will pick up stakes and migrate to another NASCAR Xfinity Series team.

From the time Hemric broke into NASCAR’s national level full-time in 2015 in the Camping World Truck Series to next February, he’ll have taken his talents to six teams: NTS Motorsports (Trucks), Brad Keselowski Racing (Trucks), Richard Childress Racing (Cup and Xfinity), plus JRM, JGR and Kaulig.

If you’re exhausted just reading that list, Hemric tries to take it in stride.

“It can be as tiring as you allow it to be,” Hemric said Tuesday (Sept. 28). “My opinion is, my whole life has kind of been this way. You never know what’s in front of you. You never know what you’re gonna be faced with. All you can do you show up. And if you show up and continue to grind it out, opportunities will be there. I’ve said that since I was 10 years old.

“It’s just the scenario that it is and I try to play the cards that I’m dealt. You can envy others that have their deals locked in or have long-term deals or know what their plans are moving forward. But at the end of the day, that’s not the way it was.”

Having that experience with so many teams, plus every manufacturer in the sport, in less than seven years can be a “double-edged sword,” according to Hemric.

“You can go into it thinking, ‘These guys do this, or this other team did that,'” Hemric said. “But every race team has its own culture that you got to learn how to conform to and transition into. I’ve tried to be even better about that as I’ve gotten older and learn how different each situation is and respect that each situation is different.”

Enter Kaulig Racing and its “culture.”  Coming into existence a year after Hemric broke onto the national stage, the team has been unabashedly “Trophy Hunting” the past several years.

Since AJ Allmendinger joined the team in 2019, Kaulig has won 14 races. All three of their drivers have won and are in the playoffs this year ahead of the team entering full-time Cup competition next season.

The news of Hemric’s future home comes with him in the midst of a playoff battle with Joe Gibbs Racing.

Hemric said the call from team owner Matt Kaulig and president Chris Rice was one he “didn’t expect.”

But Hemric also knew it was one he “couldn’t not take advantage of.”

A stop at “Trophy Hunting” Kaulig might be just right for Hemric at this point in his career.

More noticeable than the length of his resume is the glaring absence on it. With six races left in the Xfinity playoffs, Hemric has made a grand total of 202 national NASCAR series starts and made the Championship 4 twice (2017-18 in Xfinity).

He’s captured 56 top-five finishes, including 40 in his 114 Xfinity starts.

Not among those top fives: a race win.

“I feel like through the conversations with myself and Chris Rice, through the process of putting this deal together, he just reaffirmed to me how much not only what he sees — I’m always in the mix — but how he feels like he can help propel me to that next level,” Hemric said. “Not only now but moving into the future and to have somebody have that much confidence in you is special, first off. Secondly, I can’t sit here and say that being a contender year in, year out, no matter what the race team, no matter the situation could not have hurt my chances of getting that phone call.”

In the wake of winning the 2019 Cup Rookie of the Year honor with RCR, Hemric has viewed the ensuing years as a “rebuild process” for him.

It’s involved him trying and failing to find a “home” for himself in the long term.

Hemric admits “there’s nothing saying that (Kaulig Racing) is going to be that.”

However, the environment that Kaulig will provide for him comes with a special offering.

“(Kaulig Racing) ultimately felt like if they can offer me a job and let me focus on racing, let me focus on driving the racecar (and) getting the most out of myself, not worrying about the funding, … (not) having to physically, yourself, figure out the dollars?” Hemric said. “I ain’t [sic] got to worry about that, which makes this very, very exciting.”

In short, Kaulig and Rice told Hemric “‘to go drive the racecar.’ I said ‘OK, put my name above the door. I’ll be there.'”

Follow @DanielMcFadin and check out and subscribe to his show “Dropping The Hammer with Daniel McFadin” on YouTube and in podcast form. This week’s guest is Daytona 500 winner Michael McDowell.

Wish him the best of luck, but the for parties involved this move screams “sponsorship grab”.

Ride should have gone to Preece, maybe he’ll wind up at JGR again