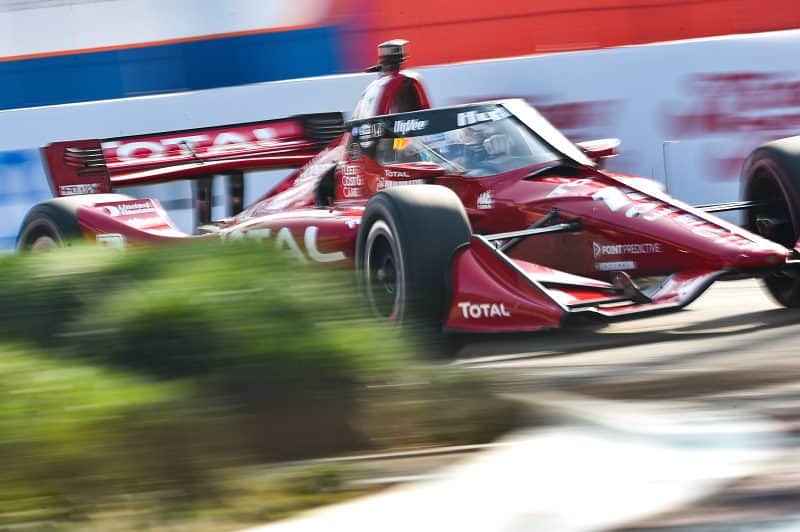 For Graham Rahal, the 2021 IndyCar season was another quietly impressive campaign. The No. 15 Rahal Letterman Lanigan Honda driver finished seventh in the championship standings and secured top-10 finishes in 11 of the 16 races, including a podium at Texas. 2021 marks the seventh consecutive year that Rahal has been within the top 10 of the IndyCar championship. While he may not be a champion yet, he’s always a contender, and a title may be even closer in his future with the strides his team took this season.

Frontstretch spoke to Rahal recently about his thoughts on the 2021 campaign, including what he’s proud of, working with several different teammates throughout the season, and if there’s anything specific he’s focused in on to prepare for next year. Plus, the 2011 24 Hours of Daytona winner gave his thoughts on the 2022 IndyCar schedule conflict between Texas and the 12 Hours of Sebring.

Brittany Frederick, Frontstretch: How do you evaluate your 2021 IndyCar season? You may not have gotten the race win you’ve been fighting for, but you finished in the top-10 in over half the races, which is consistency that very few drivers have over a full season.

Graham Rahal: We’ve been really good this year, and consistency has definitely been our thing. I think that it’s just one of those things though, that we haven’t been able to get a win. And ultimately, when you look at the championship, that’s what affects us the most…We’ve only been on the podium once. we have seven top-5’s this year, which is probably the most of anybody, or very, very, close, I would say. But you’ve got to get some wins to tip yourself over and to go win a championship, and we haven’t been able to quite do that.

So we need to just keep our heads down. I do think once the dam breaks, the wins will come rushing through. We’ve been so close so many times, and a little break here and there hasn’t quite gone our way, but we’ve just got to keep focused and putting our heads down and it will happen. There’s no doubt.

Frontstretch: You’ve been within the top half of the championship standings every year since 2015, as well. Is there any one thing that you’ve noticed this season that would push you to that next level and getting the Astor Cup? Or how do you look at the future?

Graham Rahal: I actually think that we were damn close this year, honestly. I felt this year we did a lot of the good things—a lot of the small things, a lot of the big things right. I feel like we really closed the gap. You could say qualifying is one thing, but if you look at qualifying of recent, our performance has gotten significantly better.

And so as I look towards next year, I do think there’s a lot that we can carry from what we’ve been finding lately in our race cars and our qualifying cars as well, that’ll help us. I do believe that we’re on to something that’s working better, and I think that’ll help us going forward.

Frontstretch: Rahal Letterman Lanigan expanded to a third car for half of the 2021 season, although there were different drivers in the car throughout the year. For you, what was the effect of working with multiple new teammates and having more than one new perspective?

Graham Rahal: There’s certain teammates so far this year that I’ve been able to take stuff from, and there’s other teammates that I can’t…but that’s the way it goes and you’ve just got to adjust. I think Oliver [Askew]‘s done a great job. His feedback, his feel of the race car’s been very similar to mine and that helps significantly. Everybody’s different and you’ve got to quickly adjust and learn what you can from each of them.

Frontstretch: It’s been wonderful to see Rahal Letterman Lanigan continue to grow, both in terms of number of cars and the development in the 2021 season. You’ve led this team as a single-car team, then a two-car organization and now you’ll have three full-time entries in 2022. What does the expansion mean to you personally?

Graham Rahal: It’s been great. The team, the growth, all those things have been awesome. The sponsorship growth has been tremendous—if you look at where we’re at, if you look at how many new partners we have coming in. Hy-Vee has obviously been a huge one for us, and that’s been a home run. It’s definitely been great for us as a program.

Frontstretch: The 2021 IndyCar season was also a huge growth year for the sport, whether it was the performance of young talent or the introduction of new races. What are your thoughts on just the overall quality of racing this year and where IndyCar is at currently?

Graham Rahal: Huge competition. Great parity between teams. Clearly there’s those that have stuck out; Ganassi has been very good this year. Though McLaren’s been fast, they’ve struggled on race days a little bit more than others. I think that there’s great parity, but there’s also just purely the growth of the sport.

International interest, things like that [are] growing, and that’s only going to continue to push this sport to the next level. Not only from getting international drivers, but getting international teams involved, getting more manufacturers involved so that it draws interest in Europe, and then also fans, and then TV. TV can help fund a lot, because you get the TV contracts. The money that comes with that, that does help grow the sport as well. All of those things are critical.

Frontstretch: Speaking of TV, IndyCar’s TV contract with NBC reportedly led to the 2022 IndyCar schedule placing Texas in conflict with IMSA’s 12 Hours of Sebring. You’re one of the IndyCar drivers that also has a sports car career, and brought viewers to both sports, so how do you feel about Sebring being off the table for IndyCar drivers next year?

Graham Rahal: I’m in great support of the way the schedule looks. I’d like to see another race or two in there, but that’s just me. However, yes, I think it’s a big mistake that drivers can’t compete at Sebring. And I think it sets the standard going forward. We cannot continue to change dates year-to-year. Texas has now changed three times in three years. We can’t do that if we want a crowd…Why is the Indy 500 so great? Whether you’re a race fan or not, you know the Indy 500 is Memorial Day week. We have to build equity in the dates that these races are, and they stay consistent, so that fans know. It should stay the same, and it needs to stay the same for a long period of time.

I’m a big believer in all tides raise all boats, and in the case of motor sports in general, good momentum helps all. Guys like Jimmie [Johnson] coming to IndyCar, [Romain] Grosjean coming to IndyCar, it helps Formula 1, but it also helps IndyCar. It helps sports car racing that IndyCar drivers are coming, and it also helps IndyCar that they get credibility. If an IndyCar driver wins in sports cars like Scott Dixon and [Sebastien] Bourdais and [Simon] Pagenaud—those guys dominated sports cars for many years too—it gives great credibility to IndyCar racing. That’s what we need. We need all of these things to elevate each other.

The media wants Rahal to win so bad.