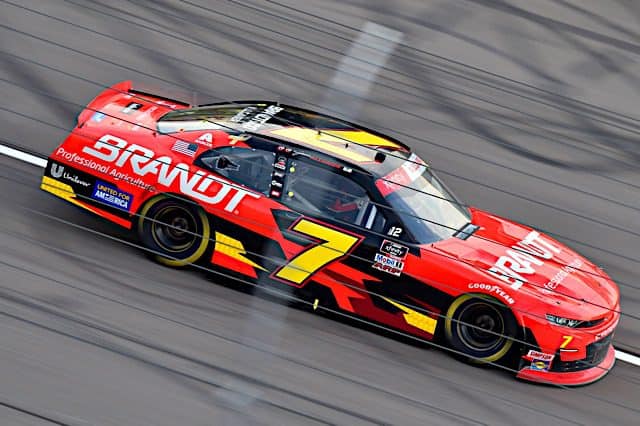 The NASCAR Xfinity Series’ second race in the Round of 12 is at Talladega Superspeedway this weekend and Justin Allgaier is on the pole.

Allgaier finished second to his JR Motorsports teammate Josh Berry, who was filling in for Michael Annett in the No. 1 last week at Las Vegas Motor Speedway.

Austin Cindric starts in second next to Allgaier on the front row, while Berry and Noah Gragson make up the second row in third and fourth, respectively. Kaulig Racing’s AJ Allmendinger rounds out the top five.

All playoff contenders are guaranteed a spot up front but two cars are also competing for the owner’s title- JGR’s No. 54, driven by John Hunter Nemechek, and JRM’s No. 8, driven by Sam Mayer. Nemechek and Mayer start 11th and 12th. Riley Herbst is 13th, Jeb Burton is 14th and Jeremy Clements is 15th.

As expected, Timmy Hill did not qualify for the race.

A performance metrics formula was used to set the lineup: 25% each of driver’s and car owner’s finishing position from the previous race, 15% of the driver’s fastest lap ranking and 35% of the team owner’s rank in points.