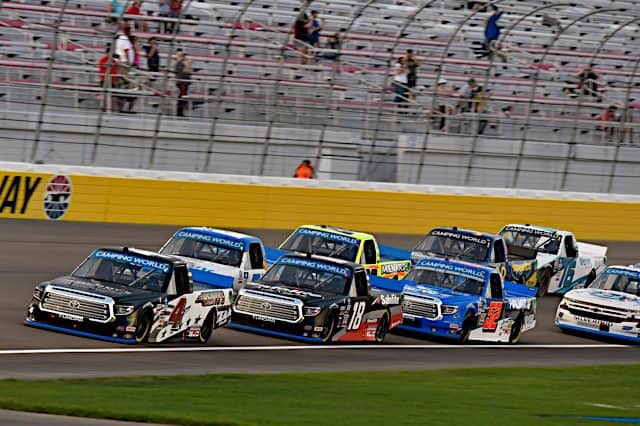 This week, the Camping World Truck Series heads into Talladega Superspeedway, staring down just three more races until the 2021 season comes to a close. So it seems rather appropriate that next year’s schedule was revealed on Wednesday (Sept. 29).

After dropping to 22 events this season, next year, the Truck Series moves back to 23 races once again as it had from 2015-2020, but perhaps what’s even more exciting is those events will be contested on 22 different tracks.

As you may expect the 2022 season will open at Daytona International Speedway and end at Phoneix Raceway just as it has, alongside the NASCAR Cup and Xfinity series.

But instead of going straight into the Daytona road course the week after the season opener, the series will sit idle until the first weekend in March when it heads to Las Vegas Motor Speedway for the only visit to the mile-and-a-half track, something that is a change from this season. In fact, Kansas Speedway is the only track to get two Truck Series races in 2022.

Get those plans set!

Take a look at the 2022 schedule for the #CampingWorldTrucks! pic.twitter.com/MZvyEafuhX

Next year also brings the return of Knoxville Raceway and Bristol Motor Speedway dirt, both of which debuted this season. But those are far from the only short tracks on the 2022 schedule. The series will also run on the Bristol concrete as well as Martinsville Speedway and Richmond Raceway.

Additionally, Lucas Oil Raceway at Indianapolis has returned to the Truck Series schedule for the first time since 2011, something I never thought would happen but have hoped for for several years.

We’ve had a few memorable moments over the years with @NASCAR_Trucks ?

Can’t wait to see what the next chapter has in store in 2022!

For those of you who may not have had the privilege of seeing the greatness that is Truck Series racing at Lucas Oil Raceway, I present to you:

Meanwhile, the series will once again visit three road courses, though there will be quite a change there. Circuit of the Americas will get another NASCAR weekend, and frankly it should, given that it didn’t get a fair shake with the incredible rain all weekend long while the sport was there this year. But that’s where the similarties end.

As mentioned above, the Daytona road course comes off of the schedule, but also absent is Watkins Glen International. And while that’s a little disappointing, the replacements come in the form of Sonoma Raceway and Mid-Ohio Sports Car Course, which will no longer host the Xfinity Series in favor of a visit to Portland International Raceway.

THE TRUCKS ARE BACK! ?

For the first time since '98, the @NASCAR_Trucks Series is returning to NorCal on June 11, 2022! We're also bringing back the @ARCA_Racing West Series #GeneralTire200 to round out an epic Saturday doubleheader.

“I think it was kind of a win-win situation for us. Gave us the opportunity and ability to bring the Xfinity Series out to Portland,” Ben Kennedy, NASCAR senior vice president of strategy and innovation, explained. “Frankly it was a natural shift having the same promoters with Kevin Savoree and the team there. Made that shift on the Xfinity side.

See also
Eyes on Xfinity: Is NASCAR’s Portland Experiment Worth the Risk?

What’s glaringly obvious too is the lack of the presence of Canadian Tire Motorsports Park. The Truck Series didn’t get to race there last year or this season due to the COVID-19 pandemic and the restrictions that have come along with it, and this time around, it’s not even on the schedule, something that shouldn’t come as too much of a surprise given the ongoing uncertainty.

“Unfortunately won’t be going back there in the ’22 season,” Kennedy said. “A big reason for that is because of the current COVID restrictions and a lot of the planning, logistics and lead time that are required for our teams and our industry to travel outside of the country. We felt like it was in our collective best interests to go ahead and not have Canadian Tire on the schedule.”

The good news for fans north of the border, though, is that Kennedy did leave the door open to the possibility of returning to the track in the future.

Not to be left out, Pocono Raceway, which lost one of its Cup dates on the 2022 schedule, will close out the regular season.

Next year’s playoffs are set up to be some of the most versatile yet as the championship battle will kick off at Lucas Oil Raceway before heading to Richmond and Kansas for the Round of 10. The Round of 8 will kick off at Bristol before Talladega and Homestead-Miami Speedway trim the playoff field down to the Championship 4.

One thing that isn’t as clear with the announcement of the schedule is what practice and qualifying may look like next season. Kennedy was asked about that but NASCAR had nothing to announce today. You’d expect there will need to be some practice at the very least for the new tracks on the schedule, and I’d advocate that if any series needs the extra track time, the Truck Series is definitely the one.

That said, I am incredibly encouraged by the versatility of the 2022 schedule. There’s a solid balance of each type of track and even something new(ish) with the addition of Lucas Oil Raceway and Sonoma along with the new in Mid-Ohio. But perhaps what’s even more important is the focus on so many different facilities. With such a short schedule compared to Cup and Xfinity, it makes little sense for the Truck Series to visit any track more than once, so to only have one two-time track on the schedule is a huge step in the right direction.

This season’s schedule has been one of the more exciting ones in recent years with multiple changes and the shuffling of a few dates, and it looks like that excitement extends straight into the 2022 season. The real question is: what do we do to make the offseason go by faster?

Reactions From Around the Series

The schedule this year has been a ton of fun and next year looks even better! ??? @NASCAR https://t.co/SZ8sbbCyyg

Well this is exciting ? https://t.co/1imLxTYBlZ

The 2022 schedule is here! A few changes are in store…

-IRP IS BACK!
-Two stops at @kansasspeedway
-More road racing at @Mid_Ohio & @RaceSonoma
–@HomesteadMiami will set the Champ 4 contenders