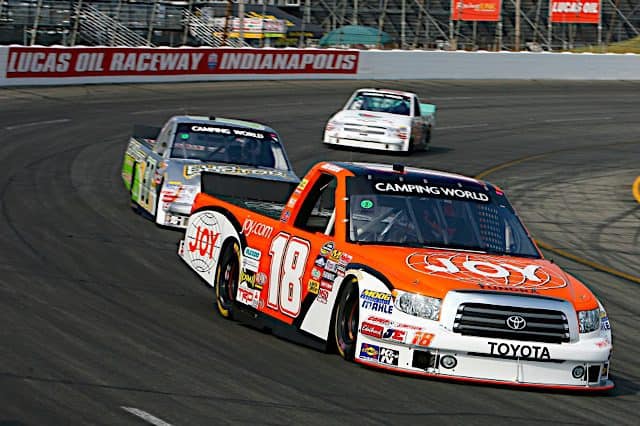 What schedule changes will there be for 2022?

The biggest and most unexpected news of the NASCAR schedule announcements for the NASCAR Xfinity and Camping World Truck series was the surprise that the Trucks are returning to Lucas Oil Raceway.

The short track, referred to by many as IRP due to its previous name Indianapolis Raceway Park, will once again serve as a companion race to the NASCAR weekend at Indianapolis Motor Speedway.

IRP may not be as impactful as it was 10 years ago; with the NTT IndyCar Series, NXS and the NASCAR Cup Series all running the IMS road course layout now on the same weekend, it’s not going to be as obvious that IRP is the best race of the weekend.

But even still, it almost certainly will be.

NXS will serve as a companion event for Cup across 31 races on the Cup schedule. The only weekends without an NXS counterpart will be the Bristol Motor Speedway dirt race in the spring, the spring Kansas Speedway race, the World Wide Technology Speedway at Gateway race, Sonoma Raceway and the August Richmond Raceway weekend. All of those weekends will be NXS off-weekends except for Gateway, which will be when the lone NXS standalone date at Portland International Raceway will be held.

The Truck race at Knoxville Raceway, in one of the more quiet moves of the announcement, will now be contested on Father’s Day Saturday. This is the lone off-weekend next season for the Cup Series, meaning that this will be the first time in quite a while that there will be a national touring series event every single weekend of the NASCAR season.

Michigan International Speedway has lost its lone Truck event, meaning the track only has a Cup and NXS race. 2022 will mark the first year that there will be no Trucks in the Irish Hills since 2001.

Mid-Ohio Sports Car Course has jumped from NXS to Trucks, with the race now being contested the weekend after July fourth. Mid-Ohio was a special race for year in NXS back when the series sponsor was Nationwide, which is based in the state and would use the race to promote the company’s children hospital. But with Nationwide out of the picture, there really wasn’t much attachment to the track anymore. It’s surprising that Mid-Ohio hasn’t been considered for a Cup race in the sense that some Ohio TV markets like Columbus have placed well in recent years.

Will NASCAR eventually bring EVs to the Cup Series?

This week, it was announced by Ford in a big NBC News segment that it would be investing $11 billion into electric vehicles in the future.

Ford chairman Bill Ford tells @NBCNews exclusively that the company is investing $11 billion to build three new factories and will hire 11,000 new workers to build electric vehicles and the batteries that power them. @tomcostellonbc has the details on Ford’s drive to go electric. pic.twitter.com/FptjKCb87v

This comes with the news earlier this year that General Motors is currently planning on phasing out all gasoline and diesel powered cars by 2035, one of the more dramatic proclamations among American car manufacturers. Even before the $11 billion investment announcement, Ford has already clearly meant business with its two biggest models, the Mustang and the F-150, already having EV versions.

I noted in May when the NASCAR Next Gen cars were officially announced was that a major mistake the sanctioning body may be making is completely walking away from the idea of fully electric engines in place of a more hybrid solution. The issue is that developing a new engine is extremely expensive for the team owners, as their entire stock essentially becomes useless. It’s much like the pressure NASCAR is under to ensure the new cars are right, because like them or not, the new cars are going to be a decades-long investment due to the common chassis.

Now, all of this changes if the new hybrid engines in development have a futureproof way to easily convert them into an all-electric engine, a la the new cars having a dedicated space for an EV battery already. But even if that’s the case, hybrid engines are going to be obsolete eventually with how the car industry is going.

Something I am curious about is what role Toyota and Sunoco are playing in development of the new engine. It might be hard for Sunoco to continue being more than just a sticker on a building if teams stop using their fuel. Toyota, meanwhile, is one of NASCAR’s biggest sponsors and is also not so enthusiastic about an all-electric future. Toyota has committed some serious money toward EVs, but it’s also been well behind NASCAR’s other two manufacturers when it comes to EV business. Those could well be hurdles if NASCAR wants to move beyond the idea of just doing an electric series and instead fully electrifying the Cup Series.

How are the ratings for Formula 1 and NASCAR?

Overall, Cup was ranked fourth for the day, while F1 finished in eighth. There are less 18- to 49-year-olds watching both than there were in the spring and summer, but that’s probably due to football either directly or indirectly. F1 has had massive gains in just a year, with the Russian Grand Prix alone seeing 18-49 more than double (0.12 to 0.26), a ridiculously large leap in rankings (54th to eighth) and 300,000 more overall viewers.

Part of it has probably been the popular Netflix reality show covering the series called Drive to Survive. But even with that hook, and keeping in mind that disaster of a race at Spa a few weeks ago, this has been one of the most and most engaging F1 seasons ever.

There are more good races in NASCAR and more championship rivalries. But when either happens in F1, it’s the best that racing can be, in part because of how sparingly it can sometimes come. Max Verstappen has taken Lewis Hamilton to the absolute limit and things have begun to really escalate between the two the last few months. The dynamic and battles, presented with industry-leading coverage from Sky Sports, has made F1 clearly the best racing series this season.

NASCAR itself is still the top dog in America when it comes to ratings, however, and probably will for some time. In the last five races, the Cup 18-49 rating has either increased or stayed steady year to year in an industry where the standards decrease every year. Both series are in a good place right now, but the really interesting story will come in a few weeks when F1 will go head to head with NASCAR.

It’s going to really speak to where this ratings boost for F1 has come from if it is going to be able to stay above a 0.20 for that race. Any lower and the F1 bump is probably going to be more like IndyCar this season, which had a lot of crossover with NASCAR based on how badly the series struggled whenever it went directly against it. Higher, and that shows that F1 has a lot of non-NASCAR fans watching the series.

See also
Eyes on Xfinity: Is NASCAR’s Portland Experiment Worth the Risk?

Can you preview the Cup race at Talladega this weekend in exactly 82 words?

Talladega Superspeedway is a crapshoot and the race that nobody wants to go in on the bubble to advance to the Round of 8, and yet 11 Cup drivers enter this weekend not safe. Expect Kyle Larson, Kyle Busch and Martin Truex Jr. to be less aggressive this race as they try to lock themselves into the next round on points and drivers like Brad Keselowski or Kevin Harvick to leave it all on the track in the closing laps of the race.