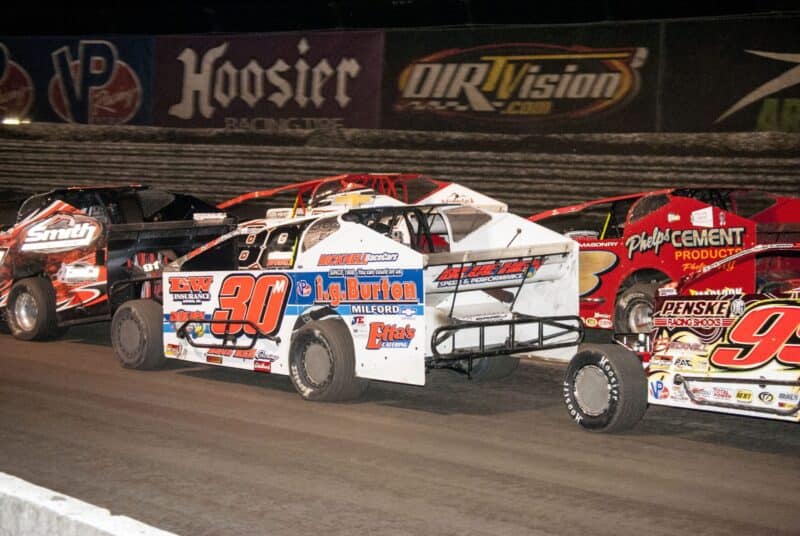 A hard-charging Dominic Buffalino comes from the back to win the Danny Serrano 100 at Bridgeport, while old-school stock cars put on a barnburner at an Illinois fair.

15-year-old Ryan Timms ran away with the final 410 sprint car feature of 2021 at Huset’s Speedway, scoring his first career win at the track in style with an $8,000 payday and a post-race wheelie coming to the scales. When asked in victory lane about the key to victory, the young driver confirmed that a big bag of Goldfish and a Gatorade were all it took on Sunday night.

The larger story on the night belonged to Justin Henderson, who clinched the 2021 track championship in 410 sprint competition with a third-place finish. Henderson, who showed up late for the final race program of the year due to family obligations, actually had to have qualifying stopped to allow his team to push his car from the pits to the grid to take a lap. Henderson was out-qualified by points runner-up Carson McCarl, but bested McCarl in the first heat race that both were qualified into.

Dominic Buffalino stormed from the 20th starting position to take the lead for good on lap 76 of Sunday’s 100-lap feature, surviving multiple late-race restarts and a Carl Edwards-esque slide job on the final lap from runner-up Ryan Godown to win the $10,000 center-drive modified race at Bridgeport.

Buffalino Holds off All Challengers in Winning Danny Serrano 100 at Bridgeport https://t.co/wgT1TJ6Hz2

The Bridgeport surface proved racy all night long, with four different leaders taking multiple laps up front. The complexion of the race changed on lap 51, however, when current leader Dylan Steuer had his engine expire while leading. That handed the lead to Godown, who had been stalking Steuer for the lead for more than 10 laps prior to his engine failure.

Of note, though both Godown and Billy Pauch Jr. threw no shortage of slide jobs in the final 10 laps, the racing throughout the field remained clean.

In about as old-school a stock car race as a race fan will see in 2021, Pontiac, Ill.’s Tanner Sullivan broke the logjam at the front of Sunday’s John Osman Memorial, using the chrome horn to clear second-place runner Terry Reid, then forcing his way under Andy Thompson for the race lead in turn 1 with 13 laps to go in the 47-lap feature. Sullivan would go on to hold off Reid through several lengthy cautions that plagued the closing laps en route to scoring the $5,000 victory.

Though the Champaign racing surface was almost entirely one-groove, the stock cars running on the facility proved able to put on a compelling race rife with bent sheetmetal. The feature’s rhythm was stymied, however, by track clean-up efforts that extended 47 laps of racing on a quarter-mile into a nearly hour-long event.

The flurry of slide-jobs that Buffalino, Godown and Pauch all threw and navigated through without issue through the entirety of Sunday’s Danny Serrano 100 at Bridgeport kept the center-drive modified ranks on a hot streak after this weekend’s barnburner Super DIRTcar event at Albany-Saratoga. Good stuff.

All the credit in the world to Justin Henderson for winning the 410 sprint car title at Huset’s. I vividly remember watching the season opener at the track for two reasons. One, Henderson drove away to a straightaway lead in that feature with speed that no other driver at Huset’s had all season long, and two, Henderson cost himself that win getting tangled up in lapped traffic. Call it inevitable or call it a redemption, this title was deserved.

On the one hand, Terry Reid raced leader Andy Thompson with a ton of respect through two-thirds of Sunday’s John Osman Memorial race at Champaign County, showing his nose on three occasions without making significant contact. However…

Reid’s patience, lack of aggression, whatever you want to call it, allowed eventual winner Tanner Sullivan not only to use his own chrome horn to take second away from Reid, it also allowed Sullivan to take the race lead, where he kept Reid at bay to take the victory. No doubt Reid’s decision to race Thompson as clean as he did cost him a victory at Champaign County.

Dylan Steuer scored the $1,000 mid-race leader bonus at Bridgeport Sunday and led more than 40 laps, but his engine expired on lap 51 as he was leading the feature.

Two serious flips punctuated the 305 sprint car portion of Sunday’s season finale at Huset’s Speedway, with Huron, S.D.’s Josh Sterrett going for a tumble in the first corner of the first lap of Sunday’s first 305 heat race, while Madison, S.D.’s Nick Barger flipped into the turn 4 fence roughly a third of the way into Sunday’s feature.

I’ll openly admit I’m not familiar with the ranks of DIRTcar stock car drivers in Illinois, so I’m taking the track PA crew at their word that Paxton, Ill.’s Andy Thompson drove the race of his career Sunday at Champaign County when he led more than 30 laps to open the feature event. Even if it wasn’t, seeing Thompson lose the lead when he washed up in turn 1 right in front of a charging Tanner Sullivan, then ultimately fail to finish the race after significant contact with Terry Reid battling for second, was a rough episode.

While the Flo Racing broadcast crew at Bridgeport made a point to advertise that a sponsor had posted a $1,000 bonus for the mid-race leader of Sunday’s Danny Serrano 100, the reality is without the track announcers plugging the bonus no one would have ever known it was a thing.

It’s a credit to Dylan Steuer and Ryan Godown that the way they were racing each other didn’t change on lap 49, 50 or 51. Rather, those two drivers were battling hard for the lead the lap before the bonus, the lap of the bonus, the lap after the bonus. But that made awarding said bonus a bit underwhelming. Just as with how underwhelming it was when Martin Truex Jr. landed a $200,000 bonus for leading the Daytona 500 at halfway in 2012 (Truex got a shoutout on FOX that was completely overshadowed by a snarling pack racing in close quarters). This is one of those ideas that, while nice for the racers’ pocketbook, does little to move the needle of the on-track product.

Inside Dirt Racing’s Richard Allen put together a feature in the aftermath of a wild Jackson 100 weekend at Brownstown tackling several incidents that are blurry in the line between hard and dirty racing in the late model ranks. The quotes from veteran driver Dale McDowell alone make this one worth a read (and while on the topic of McDowell, wishing him a speedy recovery from his upcoming prostate surgery).

This is the racing equivalent of a “first-world problem,” but the lack of a scoring ticker for the entirety of Sunday’s Danny Serrano 100 at Bridgeport made it a hell of a lot harder to keep track of what was going on throughout the field. The PA crew did a very solid job making sure they were keeping active lap counts with their commentary, but it’s 2021. Show me the running order!

DirtonDirt interviewed the new promoter of Rock Crest Raceway, which was formerly known as Twin Cities Raceway Park, Rob Wilson, who made his pitch for the new regime at the track based around “curbing fighting, rough driving and favoritism.” I will concede that I have only attended one race at TCRP in my time, but considering that one night I witnessed a late model feature that saw a driver running third bring out a caution, keep his place in the running order, then jump the race’s final restart and win as a result, Godspeed Mr. Wilson. Outside of my many trips to Bowman Gray Stadium, I can’t think of a track I’ve been to in the entire country with more suspect officiating.

Where it Rated (on a scale of one to six cans with one a stinker and a six-pack an instant classic): This midweek (or Sunday, if you want to be more specific) scores four and a half cold Busch Lights, the post-race beverage of choice of Brandon Bosma, Sunday’s 305 sprint car race winner at Huset’s. The Bridgeport modifieds were well worth watching, as were the stock cars at Champaign County. Had the Champaign racing surface had a second groove and a track crew that could clear a wreck in less than 15 minutes, add another can to that score.

Up Next: The $20,000 Pittsburgher 100 tops the late model slate, with the Lucas Oil Late Model Dirt Series heading to western Pennsylvania, but further east in the Keystone State is where the big money is, as the $75,000 National Open at Williams Grove takes to the track Saturday night for World of Outlaws sprint car action. Coverage can be found on MAVTV Plus and DirtVision respectively.