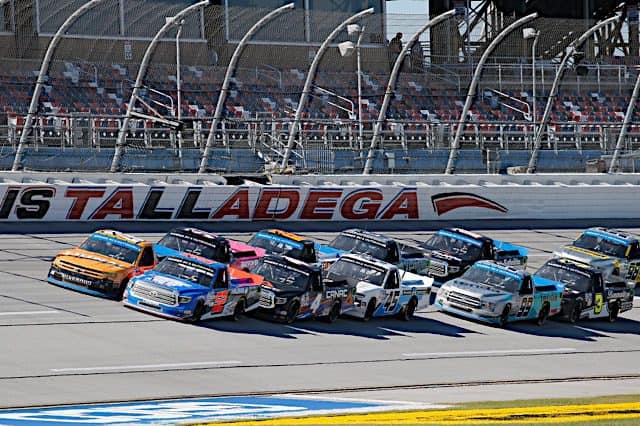 A true wild card playoff race is upon us. Teams in all three national series, the NASCAR Cup, Xfinity and Camping World Truck series, are gearing up for one of the craziest weekends in their quest for the championship. This is Talladega Superspeedway.

It’s one of the most exciting races of the playoffs but is it really necessary? No, not for the Truck Series at least.

Yes, I know that trucks have run at Talladega in the fall every year since 2006. That doesn’t mean that NASCAR can’t change things up a bit and take the Truck Talladega race out of the postseason. The sanctioning body already made significant changes for next year, with three road courses, two dirt tracks and Lucas Oil Raceway all set for 2022. Lucas Oil, which was called Indianapolis Raceway Park (IRP) until 2005, will open the 2022 Truck playoffs.

But why not move Talladega to the spring? Winning matters every week so wouldn’t have to worry about the action or excitement there. It’s a superspeedway, it’s always going to be exciting. If NASCAR is worried that one of the Cup regulars might join the fold to spoil the party for the Truck drivers, then just make it a part of the Triple Truck Challenge (if it returns). That gives an even greater incentive to win and helps create a good storyline.

One thing that often tends to happen at superspeedways is The Big One- multiple trucks crashing together, sometimes after a push gone wrong. Last year 12 trucks crashed out, including 11 in one big wreck near the beginning of the race. Ten vehicles were involved in the Big One in both 2018 and 2019, while 2016 saw 14 collected in an accident around lap 60. 2016 was also the debut of the playoffs in the Truck and Xfinity series, which could have increased the urgency for drivers to score points and lock themselves in to the next round.

In contrast, just three trucks crashed out in the inaugural Talladega event in 2006 (though several others retired due to mechanical issues according to Racing Reference).

All these incidents in the playoff era also add caution laps, lowering the amount of green flag laps run. This can affect the race’s quality; I mean, no one wants to see the trucks run under yellow flag conditions for very long. As it is, the cautions come out for stages one and two. Last year there were four laps run under yellow after stage one ended, while in 2019, stages one and two each had five laps under caution.

But stages weren’t around in 2016 when 35% of the race was under yellow flag conditions. For a 94-lap race, that is far too much, especially for this series.

Plus, these superspeedways seem to heighten the danger in all three series. While there’s been several big crashes in the Truck Series this year (including one last week at Las Vegas Motor Speedway), they often appear bigger at ‘Dega since trucks run in a pack. Sometimes the vehicles flip over, like Ty Majeski at Daytona International Speedway last year or Miguel Paludo in 2013 at Talladega. Joey Logano’s Cup car  flipped earlier this season, landing on the roof and hitting the top of Bubba Wallace’s Toyota. He appeared on FOX Sports’ Race Hub this week and discussed the crash.

“I feel like we’ve made improvements,” Logano said. “Anytime you see something like that from inside the car and you take a step back, you naturally do, you just take a step back and realize how close you were to not being able to race again, maybe not seeing your family again. It was that close and we cannot have that, we have to be better than that. So we’ve made improvements. We’re never going to be where we need to be. I think that’s the attitude we have to have, is to keep forging forward to make our cars safer and safer.”

Granted, the cars’ roofs are closer to the drivers’ helmets than the trucks, but it still could be dangerous if the truck is flipped over. Heck, even if it hasn’t turned over, the trucks could still hit the wall or each other hard when they get out of shape in the midst of the pack. And again, I realize that many races this year had some big collisions, like Johnny Sauter and Trey Hutchens III at Charlotte Motor Speedway. Drivers know the dangers involved in racing.

But big wrecks that catch 14 trucks within the pack don’t add as much thrill to the race, especially to the finish. If there’s less trucks on track at the end, there might not be as many surges from the two or three lanes to create a close finish. Look at how the Xfinity Daytona event ended; Kaulig Racing took control of all three lanes, ensuring a win. I was on the edge of my seat for the final few laps and was relieved when  they successfully crossed the line without crashing.

More chances are taken in the playoffs throughout the event, as some drivers want to earn stage points, while others just desire a win. Yet in the Truck Series, a playoff driver has never won at Talladega. Part of this could be because there’s only eight drivers competing for the title, whereas Cup has 12. In the Cup Series, only five ‘Dega races saw non-playoff contenders visit victory lane.

This is the nature at this track and though it’s great to see a surprise winner, it seems to defeat the purpose of the playoffs.

So what track should be in place of Talladega? I would say either the Charlotte ROVAL or World Wide Technology Raceway at Gateway. The former is a road course and would have thrilling restarts and action all throughout the field. Gateway, meanwhile, has more of an egg shape than the other ovals and was an interesting track in the playoffs this season.

Let’s shake things up a bit and take Talladega out of the Truck Series playoffs. It’s expensive, dangerous and should not help dictate a championship hopeful’s fate in the Round of 8.

Joy Tomlinson is dead on target with suggesting NASCAR taking Dega out of the playoffs for the trucks and is an excellent argument. But, I go one step further and say the same thing is true for both Cup and Xfinity series as well. The strategy to winning at Dega in any of the top three series is simple don’t get caught up in the big one which really is not a strategy at all – it is only hope. Larry McReynolds often says if you can start your motor you have an equal chance as anyone in the field to win at Dega.

As a race fan, I have come to hate the Dega fall race simply for chaos that it creates in the playoff standings, also, that race typically kills me in my fantasy league. Drivers that have had a few skirmishes throughout the regular season will find it nearly impossible to find anyone willing to work with them during the fall Dega race killing their chances for decent finish. You can use any criteria you want to pick the race winner of the fall Dega race (car number, pretty paint scheme, favorite driver, favorite sponsor, dart board, ouija board, etc.) and have an equal change of predicting a race winner.

Come on NASCAR, get on board with Joy’s argument here – it’s a winner! [see what I did there]