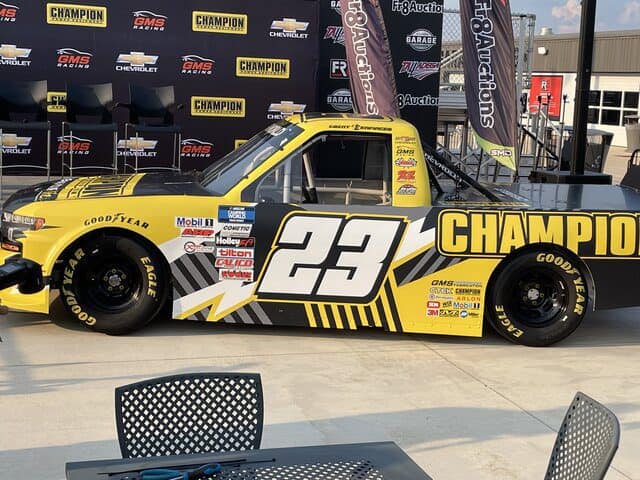 Champion Power Equipment will follow Enfinger from ThorSport Racing as he once again returns to full-time competition.  Unlike this year, Enfinger’s longtime sponsor will fund the GMS truck for the full 23 races in 2022 and in 2023.  The driver claims it rectifies a “mistake” that the company made in cutting back their funding this season.

The move is a reunion of sorts for the Truck veteran after four years with Thorsport (2017-2020). He won a race and had five top-10 finishes with GMS in an eight-race, limited schedule back in 2016.

”Definitely a huge, momentous special occasion,” Enfinger said.  “Coming back home to GMS Racing.  We have a lot of history together.  We’ve won a lot of races together.  It’s a blessing for sure.  Can’t wait to get started.”

Enfinger will be considered to be the team’s senior driver in 2022, charged not only with doing the absolute best he can for GMS, but helping the rest of the team along.  GMS Racing President Mike Beam knows the 36-year-old can do well in this role.

“We needed to get a senior guy,” Beam told Frontstretch after the announcement.  “We kind of fell behind on our development stuff because we didn’t have a Grant Enfinger, Johnny Sauter or Matt Crafton to tell you where you’re at with your vehicles.  Not having [any] practice is a challenge.  That’s why it’s so important to bring him back to help us move forward and do what we need to do.”

Beam explained the signing was also one of the easier negotiations he’s had since Enfinger was not only a known quantity to the team, but still knows the people extremely well.

”Grant and I… live about three miles apart,” he said.  “We’ve stayed friends, not only with Grant, but with Dennis [Trine, CEO of Champion Power Equipment] and all of them.  We just started talking one day and they said, ‘Yeah, let’s look at it.’  That’s how it all transpired.”

For Enfinger, he hopes 2022 will allow him to recapture his previous success with GMS.  When Enfinger previously drove for the team, he scored a victory at Talladega Superspeedway, the first-ever win for GMS Racing. He also won the pole for the season-opening NextEra Energy 250 at Daytona International Speedway.

Enfinger will be joined at minimum by Jack Wood at GMS next season, who has already been announced as driving full-time.  Frontstretch asked GMS about the remainder of their plans.

According to Beam, Chase Purdy and his backers haven’t committed to 2022 as of yet.  Zane Smith is undecided as well. One driver who definitely won’t return is Sheldon Creed: he has already been announced to run a full-time NASCAR Xfinity Series schedule for Richard Childress Racing.  As for Tyler Ankrum, the likelihood of the LiUNA!-sponsored driver continuing with the team doesn’t appear to be great.

“I think he’s going to go do something else,” Beam told Frontstretch. Ankrum had a disappointing year in which he failed to make the postseason for the first time in his three-year Truck career.

Any potential plans for Ankrum in 2022 have not been revealed to this point.

Beam also told Frontstretch that he does not currently know how many teams GMS Racing will field in the Camping World Truck Series in 2022.  Two are confirmed.  The team’s 2022 NASCAR Cup Series plans also remain unclear.

SEGAL: Should A Part-Timer Like Enfinger Been Eligible To Make The Playoffs This Season?

And people keep on taking sponsorships away and teams keep dying. Sad.

I thought Spencer Gallagher was the President of his dad’s race team, GMS.