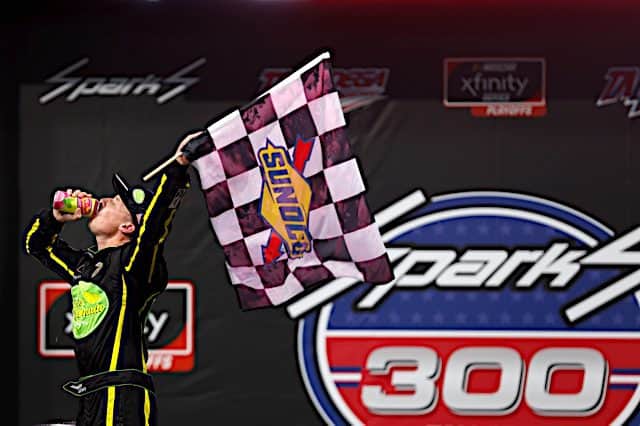 Brandon Brown upset the playoff field, stealing a win in the NASCAR Xfinity Series at Talladega Superspeedway in Saturday’s (Oct. 2) Sparks 300. Brown scored his first career victory as the caution came out with 12 laps remaining due to ensuing darkness. While many teams and spotters were proving unable to see well, having the race called for Brown proved controversial, as Brandon Jones‘ team believed he was leading at the time of caution.

"This is a dream come true!"

“Oh my God this is a dream come true, Dad we did it let’s go!” Brown exclaimed in his post-race interview. “This is everything we hoped and dreamed for […] All I ever wanted to do is take the trophy home to Mom and Dad.”

Justin Allgaier was in third place when the caution flew, thinking for a moment they were the leaders at the time of caution as well. Daniel Hemric finished in fourth as another Cinderella driver in Jordan Anderson finished in fifth.

Stage one started off with lots of lead and position changes throughout the field. Due to starting at the back, Justin Haley found himself going a lap down early in the stage losing the draft. A hard wreck occurred on the last lap of the stage between regular-season champion AJ Allmendinger and Sam Mayer as John Hunter Nemechek beat Jeb Burton for the stage win. The wreck was a scary impact damaging the wall which brought out the red flag. Riley Herbst picked up some much-needed stage points as did Burton and Myatt Snider, who ran in the final position in points.

Herbst led the field to green to begin the second stage and the field began to run in two lines. Haley fought his way from being a lap to running in the top 10 in the early laps of the stage. The field reorganized back into a single line with the top line being the dominant line. With less than 10 to go, the bottom line got going once again as Ford teammates Herbst and Austin Cindric were leading the field, switching lines to block the dominant one.

With two to go in stage two, the field was three-wide and with one lap to go, Our Motorsports teammates Blaine Perkins and Brett Moffitt linked up to pass the Herbst and Cindric duo, getting the better of them to win the second stage. This was the 2020 ARCA Menards Series West runner-up’s first stage win in only his seventh start. Herbst and Cindric ended their stage runs in fourth and ninth after controlling most of the stage lead.

After pit stops cycled between stages, Herbst once again reassumed the lead and led the field with Haley in tow. A new contender in Allgaier took over the lead shortly after, only to see the lead taken back by Cindric being pushed by Herbst, a role reversal from the second stage.

The lead would once again swap between various drivers as the stage progressed, with Jeb Burton, Cindric and Moffitt among the leaders coming to a green-flag pit stop sequence. The JR Motorsports Chevrolets and Moffitt were first on pit road, taking fuel only with 45 to go. Fords and Toyotas were the second waves of cars to make their pit stops, all taking fuel to make it to the end. The remaining leading Chevrolets and the Toyota of Jones made their fuel-only stops to go the distance, with every group making clean stops with no penalties.

Bayley Currey would bring out the caution due to stopping on pit road after leaving his pit, with his JD Motorsports machine done for the day. Following the restart, the race stayed calm until 24 laps to go, when the Big One occurred.

Noah Gragson and Myatt Snider were able to climb out of the car under their own power after this hard crash at @Talladega.

Noah Gragson was on the bottom and Moffitt got loose from the top lane, coming down and spinning Gragson. He collected Myatt Snider and several other drivers as well. The second red flag of the day flew as a result.

The threat of rain and the setting sun ushered in urgency within the field with 20 laps to go. Jeffrey Earnhardt had a tire go down and hit the wall but was able to get the car to pit road, keeping the race green. With 12 to go, the racing picked up and became dicey as three lanes were formed and another wreck happened. Harrison Burton, Herbst, Nemechek and Snider were among the notable drivers involved.

Big crash takes out a ton of cars late at @Talladega. #NASCAR pic.twitter.com/lomqMsluqT

Brown, Jones, and Allgaier were the top three at the time of caution. With darkness approaching, the race never went back to green as spotters and officials lost visibility, resulting in Brandon Brown winning the Sparks 300.

Where does this story say Jeb Burton turned Moffitt into Gragson and that’s what started the last big one. I must have.issed that part, just like you.
It’s a feel good story for Brandon Brown, I’m happy for that whole team.

Watched some of the truck and most of the Xfin races. Both had big ones that collected playoff drivers. If tomorrow follows suit, there will be one or two drivers that were expected to advance in a deep hole going to the Roval.

So is “20” the over/under for cars that are wrecked and DNF?
And how about “40” for number of laps run single file in “parade” mode.

If I were a driver I’d stay dead last until at least 20 cars wreck out, maybe even more depending on how many laps are left.