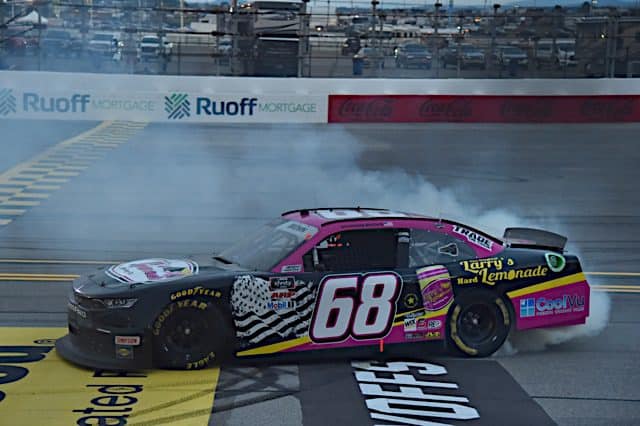 Two red flags and extensive cleanup efforts following wrecks slowly decreased the chances that the Sparks 300 at Talladega on Saturday (Oct. 2) would be completed in full.

The beneficiary of these delays was Brandon Brown, who was the leader through the most recent scoring loop when the caution was displayed for the final time. A multi-car crash on lap 101 took too long to clean up, and with visibility a major issue, NASCAR Xfinity Series officials called the race, declaring Brown the winner. In his 114th career start, the driver of his family-run team, Brandonbilt Motorsports, rolled his car into victory lane for the very first time.

CHECKERED FLAG: Due to darkness, @brandonbrown_68 has been declared the winner of the #Sparks300 at @TALLADEGA. pic.twitter.com/b0K18lUDNT

The Sparks 300 produced no shortage of good topics of conversation. The first, a first-time winner in Cinderella fashion. Brandon Brown was a part of the 2020 Xfinity Series playoffs, and if it weren’t for a late-summer run of bad luck, he could have contended for a position in this season’s playoffs. Since the 2020 season opener at Daytona, 60 races ago, Brown amassed 14 top-10 finishes. He earned his first top-five finish (fifth) at Texas in October 2020 before besting that at Phoenix earlier this season with a third-place finish.

With 14 laps to go, Brown led the bottom line with Anderson, Austin Cindric and Josh Berry in tow. Their energy, coupled with the top lane’s disjointedness, propelled him to the lead as the field exited turn 4. As he led, the field slowly formed into a three-wide monster. Over the next lap-and-a-half, he held firm on the bottom even as Jones and Allgaier side-drafted him, and Jones briefly regained the unofficial lead down the backstretch with 12 laps to go, Brown did not waiver.

Another surge from the inside lane built up, and Brown had a run as contact between Harrison Burton and Brett Moffitt triggered a crash. When the caution came out, Brown was the leader as of the most recent loop line. The race wouldn’t resume, and Brown was declared the winner.

While the race didn’t end in the most entertaining of fashions, the green-flag racing displayed by the field of Xfinity Series drivers was compelling from start to finish. It was aggressive, with few drivers content on just riding around, clicking laps away. It was the most organized, chaotic superspeedway race in recent memory. In the previous few Xfinity superspeedway races, the energy of the leaders would slowly migrate up to the top lane.

But in Saturday’s Sparks 300, the energy often switched from the outside lane to the inside lane and back again. At the beginning of the third and final stage, there was even a point that five cars in the inside lane passed a train of 15-plus cars on the outside. When the racing is organized chaos, entertaining mayhem is soon to follow. Because when cars, particularly the leaders, are constantly switching lanes to follow the energy and three-wide situations is the norm, a wreck is soon to follow.

Two major hits were taken in the race by JR Motorsports drivers Sam Mayer and Noah Gragson. 25 years ago, their cars would have looked like a tin can that had been kicked down the road for miles. Due to safety advancements by NASCAR and the racetracks, only the front and rear ends of their Chevrolets looked wrinkled. Energy from the collisions absorbed by the SAFER barriers, crumple zones in the car and safer fuel cells contributed to both drivers climbing out of their cars on their own power after taking head-on collisions with the outside wall and being hit in the rear.

It’s plain and simple. The only bad thing about the Sparks 300 was the start time. It was doomed from the start because the NASCAR Camping World Truck Series started its race after 1 p.m. ET. It wasn’t until after 4:30 p.m. ET that the Xfinity Series went green. Sunset was slated to be 7:30 p.m. ET in Talladega, but it was darker sooner than expected with rain moving in.

At a track with no lights and a higher probability of red flags, running two races in six hours was pushing it. It isn’t the first time this year that NASCAR has dealt with the issue of enough sunlight (NASCAR Cup Series at New Hampshire in July), and it likely won’t be the last until the issue of start times is addressed. While many will be happy that Brown was the beneficiary of the race having to be called, a race ending under yellow isn’t desired by fans in the stands or watching on TV. If the Xfinity and Camping World Truck series continue to race on Saturday this time of year at a track with no lights, the first race must begin around noon.

With two corners to go in stage one, AJ Allmendinger’s playoff chessboard was knocked to the ground. He was battling for 10th and was on the high side entering turn 3. Sam Mayer was below him and Moffitt inside of him. Eventual winner Brown had the nose of his Chevrolet between Mayer and Moffitt. It appeared Mayer did not know Brown was there and cut across his car’s nose. Mayer’s car turned to the left and bounced off Moffitt before turning right, directly into the path of Allmendinger.

The pair pounded the outside wall. The impact was so hard that three of Mayer’s wheels left the track surface and damaged the SAFER barrier, necessitating the need for NASCAR to conduct repairs. Mayer said in his NBC interview that the incident was caused by “People not being smart.”

If Mayer hadn’t seen a replay of the incident, his comments might have been premature. If he had, then the comments aren’t the best. It was a racing incident that could have been prevented had someone’s spotter relayed “four-wide” in time or another had backed out. That’s racing at superspeedways. Mayer better get used to it.

Misfortunes of others and Brown’s victory salvaged Allmendinger’s chessboard. At one point during the race, he was a few as 13 points above the cutline. At races end, he was 33 points above. Lucky for Allmendinger, the ROVAL is next, and he has won the past two races there.

Brown won the race and Anderson finished second. Both deserve the Underdog Performance of the Race award, but this week it will be Blaine Perkins. The 21-year-old from Bakersfield, Calif. made his seventh career Xfinity Series start Saturday, all coming this year with Our Motorsports. His best finish before Talladega was 20th last weekend at Las Vegas. His runs in the No. 23 have been lackluster and forgettable when compared to performances by Austin Dillon, Ty Dillon and Tyler Reddick.

Saturday at Talladega, he won the second stage and finished 13th.

Late in stage two, he was leading the inside line with help from teammate Moffitt. Moffitt eventually left the bumper of Perkins for the outside lane, leaving Perkins to fend for himself in a three-wide battle for third as the Fords of Riley Herbst and Austin Cindric held on to first and second.

Moffitt slotted back behind Perkins with two laps to go in stage two as the field exited turn 4 just as the Ford duo separated a bit too much. This gave Perkins a burst of speed through turns 1 and 2 on the final lap, and with one final shove from Moffitt, Perkins was leading convincingly, crossing under the green-and-white checkered flag first.

“At the end of the day, it’s disappointing, but that’s why you work so hard in the regular season to gain all those bonus points, so it (a crash) doesn’t put you completely in a hole.” – AJ Allmendinger

“It is what it is. You can rant and rave and be pissed off and curse and all that, [it] doesn’t help what [happened].” – AJ Allmendinger

“This is everything we’ve hoped and dreamed for. Everything I’ve ever wanted to do is take the trophy home to mom and dad.” – Brandon Brown

All 12 Xfinity Series playoff drivers entered Talladega vulnerable to the unpredictability of superspeedway racing. Cindric is the only one to leave capable of sleeping easy the next week. Despite not winning, he did earn enough points to advance to the Round of 8 on points alone. His season-long rival Allmendinger didn’t make it to the end of the first stage but escaped with a decent points cushion. With the series’ next stop being the ROVAL at Charlotte Motor Speedway, Cindric and Allmendinger will be favorites to win. Cindric has finished top 10 in the three races run there, and Allmendinger is a two-time and defending winner.

Allgaier is 55 points to the good, and Hemric is 41 points above the cutline. Allmendinger is 33 points above the cutline. Fifth-place Justin Haley is 24 points to the good and is the highest of those needing to score as many points as possible to ward off the possibility of championship elimination. Jeremy Clements, Herbst and Myatt Snider are all in must-win situations. While not mathematically eliminated, the points needed and the likelihood of others finishing poorly are too low to bank on pointing their way into the next round.

Despite the lack of an exciting finish, the Sparks 300 was a fantastic race. The level of aggression and chaotic nature of the race was right on target. It’s another feather in the Xfinity Series’ cap that the series is putting on the best shows in NASCAR at this time. At no point was I on the edge of my seat worrying that the Big One was going to break out at any moment, but I also wasn’t slumped over bored. I’ve mentioned it before, but the race was organized chaos, which is what superspeedway racing should be. Not 20 wrecks a lap that didn’t materialize.

Two races are down, one to go in the opening round of the 2021 NASCAR Xfinity Series playoff. Charlotte Motor Speedway’s ROVAL is the final test and opportunity for playoff drivers to advance into the Round of 8. The Drive for the Cure 250 begins at 3:00 p.m. ET on Saturday, October 9.

After the ROVAL, the three tracks that make up the Round of 8 are Texas Motor Speedway (Oct. 16), Kansas Speedway (Oct. 23) and Martinsville Speedway (Oct. 30). The 2021 NASCAR Xfinity Series season concludes at Phoenix Raceway on November 6.