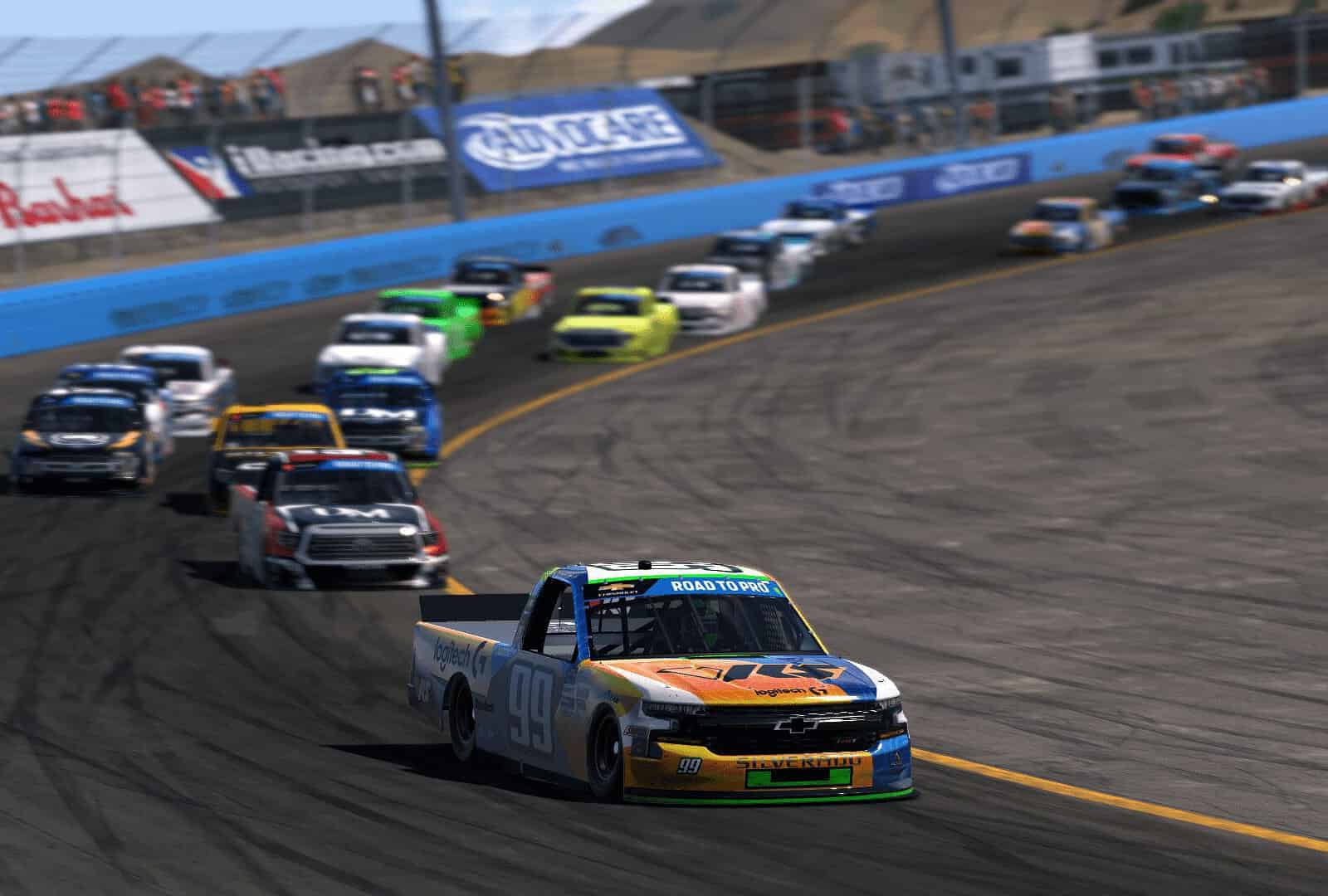 Another two weeks in the books since the last iRacing roundup. Two weeks ago, only the FTF Cup Series had anything to talk about, so the round up this week encompasses that as well as new results from the 100% Cup Series and the eNASCAR Road to Pro Qualifying Series. There’s also a brief section on the PBTF GameON 150 special event.

Both FTF and 100% are nearing the end of their seasons, slowly but surely. 100% Cup Series is a week ahead as FTF Cup had to postpone one of their races due to real world weather events. Finally, the Road to Pro Qualifying Round is over and we now know the 20 drivers advancing onward.

The finale to the Round of 16, 12 would advance while four would head home. Regular-season standout Michael Guest was unable to participate in the entirety of the round, so he was a lock to be eliminated. The final three spots were all still up for grabs, however.

As hopefuls like Ryan Nawrocki and Kevin McAdams found trouble through the race, the others at the cut line shined at the colosseum. Alex Kolonics, Gary Watterworth and Evan Rice were all able to put the races they collectively needed to advance while Nawrocki, McAdams and Jake Poulin all fell short.

For the race for the win, Dylan Ault was dominant. In his first return to the series in months, Ault led the most laps and collected the victory, stealing a chance from someone who may have needed a win to advance. He held off his Lowline Racing teammates Michael P. Frisch and Brian Mercurio to take both stages and the overall win.

With @dylanault42 returning to the series and winning his first career FTF Cup Series race at Bristol, it all came down to points. Twelve drivers are moving on while four will be left behind heading into the Round of 12 following the @NicelysLeagues 300 tonight. pic.twitter.com/buvay2luTs

Moving on to the Round of 12, only Blake Reynolds and Ryan Doucette collected the win necessary to move on. They’ll be joined by Frisch, Mercurio, Garrett Konrath, Kevin King, Brandon Hawkin, Tyler Garey, Chris Wetz, Rice, Watterworth and Kolonics. The next round starts on Sunday at Las Vegas in the Car of Tomorrow package.

The folks at Shenandoah Shine worked together with the Pediatric Brain Tumor Foundation for a 100-lap fundraiser in honor of Bentley, a 4-year-old who lost his life battling a brain tumor. The fundraiser goal was to raise over $2,500, and the participants and organizers were able to achieve that.

The race itself, live on Podium Esports, was a 100-lap fun race at Chicagoland Speedway featuring another older NASCAR stock car, the Chevy SS from 2013. The car has more horsepower than the current Gen 6, as well as less downforce, so the cars were harder to drive.

Boyd Hoggan took the pole position on the night, leading 25 of the 100 laps in the process. A late-race scuffle kept him out of victory lane. Shawn M. Butler and Jon Adams were also highly competitive, but the win went to Casey Tucker when it was all said and done.

Josh Ward, who just started running in 2021 just over a month ago at Daytona, was able to capture his first pole of the season. While he did get to start there, he was issued a penalty on the green flag and pulled off the racing surface to let the field by on the backstretch.

That gave the race lead to Preston McCray for the moment, but it wasn’t too long before Cam Stone moved into the top spot. On lap 21, Jon Dulaney was able to make his way to the lead, and from there, it was fairly smooth sailing. Dulaney went on to sweep the stages, leading 160 laps in the process to take the win and punch the first Round of 8 ticket.

We had a little of everything this weekend. Bumping, Grinding, Rubbing, Flipping, Pushing!!! HIGHLIGHTS from Las Vegas!

Dulaney, Hixenbaugh, Stone and Benefiel continue to lead the standings despite the no-show from Benefiel. At the bottom, Kevin Steele sits in the danger zone after some bad luck at Vegas. Steele, along with McCray, Demaris Hickinbottom and Ryan Samuelson will need to rebound at Talladega and the Charlotte Roval.

The final chance to take the next step up the eNASCAR ladder, the eNASCAR Road To Pro Qualifying Series Round 2 finale took the two splits to Phoenix to settle who advances. In the first split, some of the bubble drivers such as Christian Pedersen, Kaden Honeycutt, Casey Tucker, Collin Bowden and Oumar Diallo.

As the two splits went on at the same time, drivers had to be aware of where the other drivers they were facing were running on the other side. Diallo and Bowden both entered the finale only a single point behind the cut line. The guys they were trying to pass, Dylan Ault and Justin Bolton, happened to be in the second split.

As it turned out, neither Diallo or Bowden were able to advance. Bowden wound up two points below the cut and Diallo was running in prime position to take it before he wound up wrecked and out of contention.

CHECKERED FLAG IN RACE 1!@dstrauss51 DOMINATES THE ENTIRE 2ND ROUND AND BRINGS HOME HIS 6TH WIN OF THE SERIES!

More contenders in the second split also were weary of their fate, waiting on the result of both races to go official. Bubble drivers like Liam Brotherton, Dylan Ault, Michael Cosey Jr., Blake McCandless and Justin Bolton resided in this one.

Early on, it looked to be a dominant day for Ault. The race was trending green, so green-flag stops were on the menu. One stop or two, however, was an entirely different call. It seemed like at first a two-stop would be the meta. Ault, Kollin Keister and Drew Faryniarz all stopped early and were able to get back on the lead lap easily, but the tire wear equalized sooner than expected.

That handed the race into the hands of the one-stoppers, but as they took their pit, a caution flew that changed the strategy up. Cosey Jr. and McCandless were both on the single stop, but when pits opened, they opted for two tires and a reclamation of track position. The race wound up with a yellow feel, and as Cosey held on to win and clinch his spot, all eyes fell on the battle for the final transfer.

Bolton had it as they crossed the line as he ran in ninth. McCandless was only in fifth, and he would need at least two more spots on Bolton to take it. McCandless was stuck, unable to pass Brandon McKissic, hoping for his own miracle, as well as Ault as they raced side-by-side ahead.

Bolton just needed to complete one more incident-free lap, but his wish was denied. A bump from Jeremy B. Davis moved the former Coke Series driver out of the groove and back four spots, eliminating him and advancing McCandless.

CHECKERED FLAG! @windVOW8820 WINS AT PHOENIX! Points implications for Bolton on the final lap as he gets pushed out by Davis!

As the points turned out, McCandless was the last man in after drops were officially calculated. Bolton and Bowden would be the first out by a mere two points. Other big names not moving on include the Round 1 champion McKissic as well as former Coke Series winners Jeremy Allen, Brandon Kettelle, Brad Wright and Adam Gilliland.

Check out the previous broadcasts over at Podium Esports and Podium 2.

100% Cup Series will continue their Round 12 at Talladega Superspeedway on Saturday night at 8:30 p.m. ET. If the race is streamed, it will be live on 3 Wide TV.

FTF Racing heads to Las Vegas Motor Speedway for the first race in the Round of 12 on Sunday night, live at 8:00 p.m. ET on BottomSplit.

While Monday Night Racing continues its offseason, more details were announced for Season 4. The series will be split into two, with new registrants competing in the Road to Glory while the series regulars take part in the Pro Series. It all kicks off on November 1st on Podium 2.