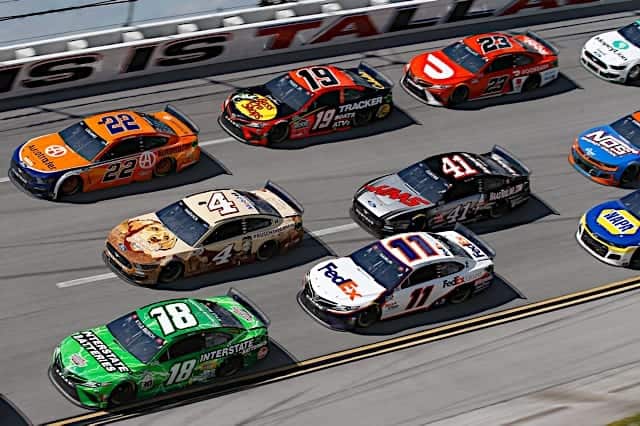 Likely the most dreaded event of the NASCAR playoffs for any series, Talladega Superspeedway’s 2.66-mile oval looms in the Cup Series’ drivers’ windshields for Sunday (Oct. 3).

It’s the second race of the Round of 12, and the goliath down in Alabama has already produced its share of chaos during the weekend.

Keselowski leads all drivers at Talladega with six victories, including a win in the spring of this year, with Logano possessing three of his own. Hamlin and Blaney both have two wins, while Kyle Busch, Harvick, Elliott, Aric Almirola and Ricky Stenhouse Jr. all have one.

Both Keselowski and Logano each have two wins in the fall event, while Hamlin won it last year in a wild finish.

Prior to the race, none of the playoff cars had issues going through pre-race inspection.

All Round of 12 Cup cars are good on the first or second time in tech. None of the playoff cars to the rear.

It originally appeared that rain was scheduled for much of the race’s time slot, but updated forecasts as of noon Sunday indicate that the rain chance between 2 p.m. (the scheduled start time) and 6 p.m. dropped significantly.

The skies did open up in the morning, and track-drying efforts quickly got underway.

With two first-time winners already visiting victory lane this weekend, the Cup Series could certainly see the same. Some drivers without a win that have previously been notable at superspeedways include Bubba Wallace, Matt DiBenedetto, Tyler Reddick and Corey LaJoie.

Mayhem abounded during the Camping World Truck Series’ and Xfinity Series’ Saturday events at the track. A massive 21-truck crash whittled the field down significantly, setting up a chaotic finish in which contact with John Hunter Nemechek sent the No. 4 sliding and Tate Fogleman scooting by for his first career win.

As if trying to continue the first-time-winners-under-weird-conditions trend, Brandon Brown scored his first-ever Xfinity win a few hours later. A couple of hard crashes sent the Xfinity cars racing late into twilight, eventually forcing NASCAR to call the race due to threat of darkness.

The Cup Series takes the green flag for the YellaWood 500 at 2 p.m. ET on NBC’s flagship station.