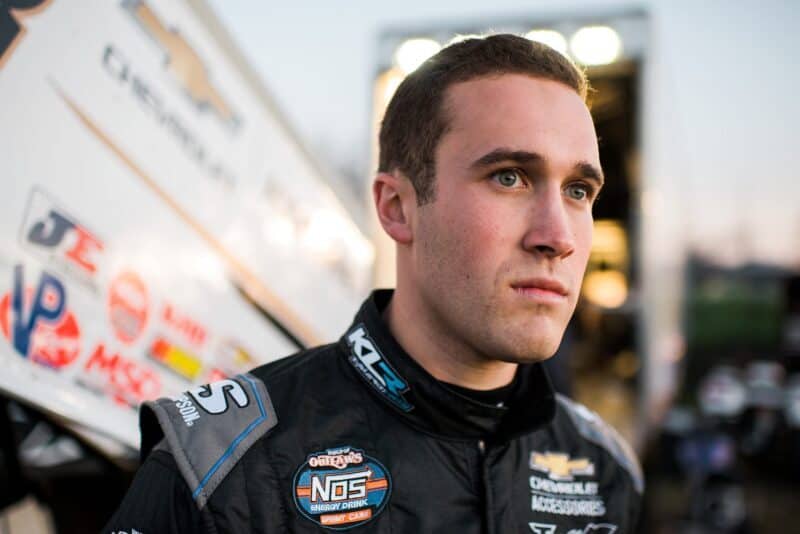 Carson Macedo steals the National Open at Williams Grove and the biggest payday of his career, while super late model points leaders (all but) secure national championships.

Carson Macedo scored the biggest-paying win of his career Saturday night, slide-jobbing his way past home-state driver Logan Schuchart with five laps to go and holding off a last-lap challenge to score the $75,000 National Open win, his 10th victory of 2021. Scoring his 10th win made Macedo the third driver to accomplish that feat on the World of Outlaws tour in 2021, joining Brad Sweet and David Gravel.

The night opened looking a banner opportunity for the “Pennsylvania Posse,” with Brent Marks starting on the pole and leading the opening 12 laps. Disaster struck for Marks on lap 13, however, when he misjudged the lapped car of Dylan Cisney in turn 1 and spun himself out while leading the feature. That handed the lead to Schuchart, who led the feature until struggles with the lapped car of Justin Henderson opened the door for Macedo to make his race-winning pass.

Longtime LOLMDS veteran Earl Pearson Jr. led 92 of the 100 laps contested on Saturday night in by far his best performance of 2021, but in the end young Hudson O’Neal led the last eight laps, including the one that counts. Capitalizing on a mid-race shock adjustment that visibly sped up his No. 71, O’Neal used the low side of the Pittsburgh half-miler to pass Pearson for the $20,000 win, his sixth tour win of the 2021 season.

After starting 17th, coming out of the B-Main, and entering the hot pit during tonight’s feature. @HudsonONeal71 came out on top! Congrats to our top 3 for an amazing race! pic.twitter.com/Q4VzVlEKhB

Points leader Tim McCreadie capped what has been a banner weekend with a third-place finish, all but securing the series points crown for 2021. Defending series champion Jimmy Owens was having a strong top-five run, but a flat tire on lap 73 relegated Owens to a ninth-place result.

While McCreadie has all but secured the LOLMDS crown for 2021, Brandon Sheppard actually did the deed, clinching the 2021 World of Outlaws Late Model championship with a runner-up finish Friday night at the Cherokee Speedway. Sheppard, on the strength of eight feature wins, has now won the WoO late model title three consecutive seasons (for the record, he finished sixth at Senoia on Saturday).

Last night, @B_Sheppard_B5 officially clinched the 2021 @WoOLateModels championship, the fourth of his career.

As for McCreadie, 2021 is his season, no question. And even if it wasn’t, this week was owned by the veteran driver of the No. 39. Telling MAVTV “it’s a young man’s sport, so I guess I better… give out more receipts” after finishing second at Brownstown last weekend, McCreadie responded by scoring fast time in both LOLMDS tour races this weekend, winning heats at Raceway 7 on Friday and Pittsburgh on Saturday, winning Friday’s Great Lakes 50 feature and finishing third in the Pittsburgher 100. Wheelman.

Not to be forgotten, the hottest super late model driver in America had a banner weekend of his own. Brandon Overton was the driver that bested Sheppard at Cherokee on Friday night, scoring his fifth tour win of 2021 in the Mike Duvall Memorial race. “Big Sexy” then followed that up with a Tennessee State Championship win at 411 Motor Speedway on Saturday.

There’s no way to call 2021 anything but a success for Spencer Bayston. Though he finished a mediocre 14th in Saturday’s National Open, Bayston’s season trajectory has gone from being a super-sub for Justin Peck, to landing a full-time ride with Sam McGhee Motorsports running the full All-Star Circuit of Champions slate. Now, that has resulted in another promotion, with Bayston signing with CJB Motorsports to run the World of Outlaws full-time in 2022. Look no further for a rookie of the year favorite.

After enduring the heartbreaks he did at Brownstown last weekend, it’s hardly surprising that Josh Rice returned to his home track and was as relentless as he was to score a $3,000 payday, throwing everything and the kitchen sink at James Scott before prevailing on lap 28 of a 35-lap feature. For those that have a Flo Racing subscription, it’s a replay worth watching.

@joshjr11 at Florence is just magic

Alex Bright scored his 11th win on the USAC east coast wingless sprint car tour in dramatic fashion Friday night at the Georgetown Speedway in Delaware, stealing the lead on a green-white-checkered restart from a dominant Chris Allen.

Colona, Ill.’s Eric Barnes went from vexed to villain in the span of one corner in Thursday night’s modified feature at Cedar County Raceway in Iowa. Breaking his front suspension while leading, Barnes was limping his car around the low side of the track with a left-front wheel that was visibly dragging for multiple laps before losing control in turn 4 and cutting across race traffic, colliding with the No. 82 of Jake McBirnie and forcing him off the racing surface in turn 4. That kind of damage should have had the car parked long before this incident happened.

David Gravel did make up ground on WoO points leader Brad Sweet Saturday night with a fifth-place run in the National Open feature at Williams Grove, but a golden opportunity to throw the championship points race into chaos was lost the night before. Sweet, who struggled all night Friday and actually had to use a provisional to make the feature, was running on the border of the top 20 as Gravel ran ninth, when disaster struck five laps short of the finish, as a faulty ignition box parked Gravel for the night. What could have been.

Shane Clanton was in prime position to score his first LOLMDS win since Bubba Raceway Park back in February, leading 37 of the first 41 laps of Friday’s Great Lake 50 at Raceway 7 before blowing a tire while leading.

Elwin, Ill.’s Alan Crowder endured the harshest wreck of the weekend on Friday, coming as close to successfully knocking down a wall at Illinois’s Lincoln Speedway than most drivers ever will.

. @dirtvision REPLAY: Alan Crowder crashes hard in @LincolnILSpdwy's turn one in UMP Modified qualifying, but thankfully he is okay. pic.twitter.com/A8oEayybmO

Having said that, USAC regular Brady Bacon, whose wall-clearing tumble at Terre Haute in May remains the most spectacular of 2021, waited till the night after Terre Haute to wreck in dramatic fashion on Saturday.

Kyle Larson won Friday’s preliminary National Open feature at Williams Grove, but a poor qualifying run on Saturday buried Larson deep in the field Saturday, where he finished a quiet eighth. That result prevented Larson from joining Doug Wolfgang and Donny Schatz as the only drivers ever to win the King’s Royal, Knoxville Nationals and National Open in the same season.

Though in a personal and unprofessional sense I enjoyed seeing my hometown’s own Trever Feathers race through a B-main to make Saturday’s Pittsburgher 100 field, the reality is the race was nothing to write home about. That wasn’t aided by the fact that MAVTV’s coverage was devoid of replays all night long, including after a major incident in the first B-main that saw Gary Stuhler and Colton Flinner take each other out racing for a transfer spot. Seeing five minutes of the tow truck at work after that mess, but no replay of said mess? Do better guys.

DirtVision certainly did better this weekend, especially on Friday night, using its new-fangled “studio” to show live look-ins of feature races simultaneously going on at Cherokee and Lincoln as the racing program continued at Williams Grove. DirtVision integrating its offerings and doing live look-ins is an AWESOME idea that should be available all weekends, not just during crown jewels.

With the @WorldofOutlaws at @WilliamsGrove and the @WoOLateModels at @SenoiaRaceway, it's a busy night on DIRTVision! Here's @TheJohnnyTV getting you ready for both shows from the DV Studio in Concord, North Carolina pic.twitter.com/1s3DJwiHvo

I’m high on DirtVision right now, but not on the World of Outlaws late model tour, which released the first part of its 2022 schedule this week.

Big plans are already in place for the 2022 World of Outlaws @MortonBuildings Late Models season.

In a word, underwhelming. Not only is the series returning to Bristol despite the dirt track configuration of the Colosseum putting on less than enthralling racing, but the departure of the Firecracker 100 from the schedule was replaced by a $20,000-to-win feature at “The Rev,” Revolution Raceway Park in Louisiana. The Rev hosted one of the best sprint car races of the year back in March, but has made headlines this summer and fall more for canceling races than racing. Plus, the new facility hardly screams tradition like Selinsgrove did.

Coupled with the fact that the World Racing Group has yet to show any progress in ensuring that the annual USA Nationals are actually going to be available on DirtVision instead of the pay-per-view boondoggle they’ve become, and the gulf between this tour and the Lucas Oil ranks appears poised to grow next season.

Seeing as how Michael Myers doesn’t tend to slaughter until Halloween night, it wasn’t too surprising to see him in the crowd at Senoia on Saturday taking in the late model action. The “evil” certainly appeared present though, as he was featured on the DirtVision cameras awfully close to a nasty 602 charger qualifying session that saw two late models wreck hard on the frontstretch.

And on the note of wrecks, let’s close on that. In addition to my dirt racing duties, I spent Saturday working the editor’s desk for my colleagues at Frontstretch and their NASCAR coverage this weekend. Following the melee that Saturday’s truck race apparently was, the president of Talladega Superspeedway made about the most asinine comment I’ve heard anyone in race promotion make in 2021.

Talladega track president Brian Crichton tells fans on the PA system re: Fogleman: "That's the way a truck should look when it finishes a race at Talladega Superspeedway."

That’s quite the departure from the plethora of dirt promoters that have been seen handing out money to drivers to buy a tank of gas for their haulers, increasing payouts and continually adjusting rulebooks to ensure that race teams can deal with the ongoing tire shortages gripping the short-track industry.

I’m not deluding myself into thinking there aren’t plenty of greedy, dishonest snakes running dirt tracks in this country. There are. But I can’t think of any that aren’t promoting races for a monopolistic entity like NASCAR that’d willing to make proclamations that $250,000 race vehicles being torn to shreds is the way things oughta be.

How it Rated (on a scale of one to six cans with one a stinker and a six-pack an instant classic): Despite the prestige of numerous events this weekend, I’m only going to give it three and a half Yuenglings. The Pittsburgher underwhelmed, and though Macedo and Schuchart made the closing laps of Saturday’s National Open exciting, Gravel’s issues Friday, Marks spinning himself out Saturday and both Larson and 2021 track champion Lance Dewease being buried in the field hollowed the Grove’s big weekend out a bit.

Up Next: The coming midweek will feature a pair of late-season Sunday programs up north, while Tuesday and Wednesday nights are highlighted by the kickoff to New York’s Super DIRT Week, with racing at Brewerton Speedway Tuesday night and Oswego Speedway Wednesday. Coverage of the DIRT Week events can be found on DirtVision.