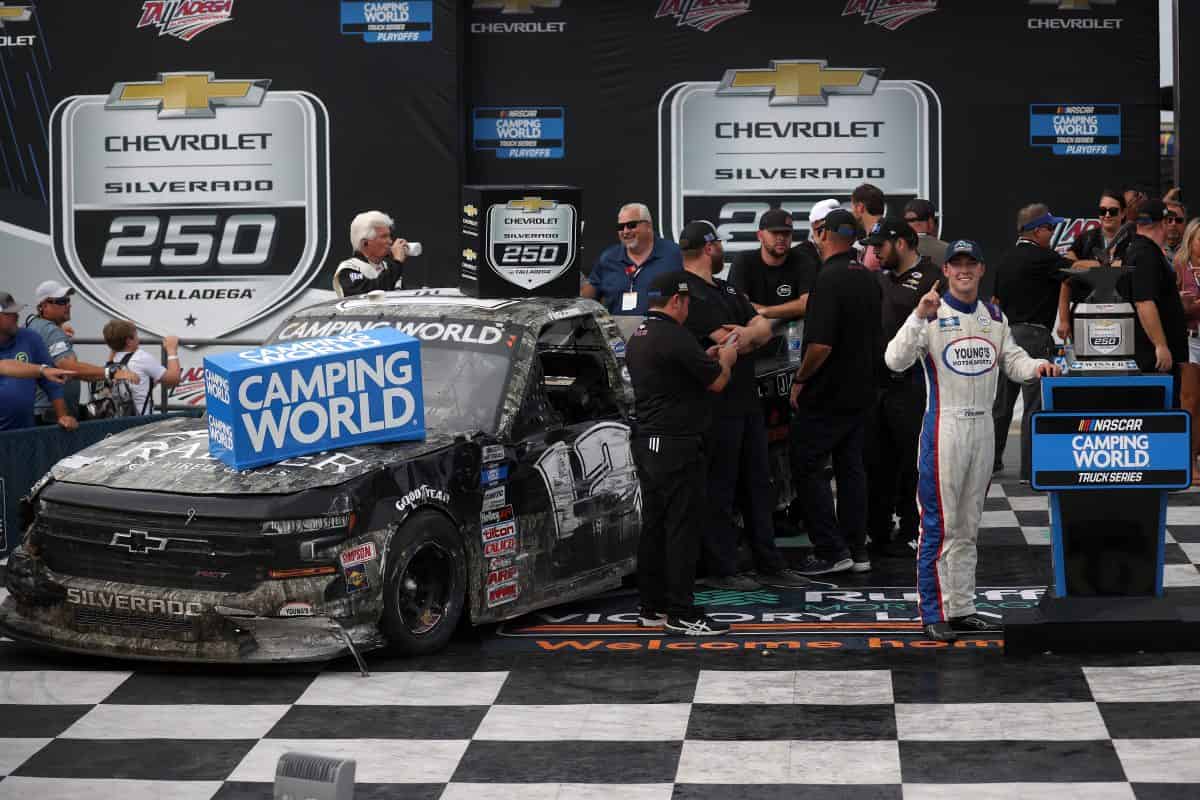 In a Nutshell: Tate Fogleman scored his first career Camping World Truck Series win as he wrecked at the start/finish line in a chaotic overtime finish at Talladega Superspeedway. Contact with John Hunter Nemechek, who led the field on the white-flag lap, opened the door for the driver of the No. 12 Chevrolet to edge Tyler Hill by 0.052 seconds before both drivers wrecked at the finish. Todd Gilliland ended up third, despite a hole in the nose of the No. 38 Ford following contact with Chase Purdy that set up the overtime finish. Nemechek and Ryan Truex rounded out the top five.

Throw every name in the field in a hat, shake it up and toss it in the air. Pick up a random piece of paper and that’s the one that could have won, given the unpredictability that superspeedway racing brings. But jokes aside, Gilliland was strong in the draft and even back in the pack following a pit-road penalty. It makes you wonder what might have been if there wasn’t a large hole in the nose of the No. 38 on that final restart.

They tangled on Bristol Motor Speedway’s dirt track configuration and once again, Matt Crafton and Nemechek found each other at Talladega. The driver of the No. 4 worked his way through the field aggressively, cutting off the noses of Johnny Sauter and Ben Rhodes and nearly triggering large wrecks on his way to the front.

But contact between Nemechek and Crafton in the tri-oval at the end of stage two sent Crafton sliding back almost outside the top 10 and led to a profanity-laced tirade on the No. 88 team radio.

88 radio is not happy with JHN: "Bullshit, that fucking 4. I've had it with his shit. Fuck." #NASCAR

The pair managed to work together late in the race to work their way toward the front of the pack and back in contention for the win, but post-race showed there were some hard feelings between the No. 4 and No. 88 teams when a member of Crafton’s team shouted at Nemechek after he emerged from the truck. And while he smiled and gave Nemechek a thumbs up, I’m sure there’s much more to this interaction.

That’s certainly a unique way to show your displeasure with another driver, and as expected the pair didn’t see eye-to-eye about their contact on the track, with Crafton placing the blame solely on Nemechek.

“Stage two off of turn 2, there at the end he (Nemechek) hits me off of the corner,” Crafton explained. “He’s smarter than that. I’m fine with getting hit going down the straightaway for stage points, but not coming off of the corner, but what comes around goes around sometimes. At the end of the day, these guys brought me a really fast Menards Toyota Tundra.”

Whether this tension between the two translates into something that pops up at Martinsville Speedway in a few weeks remains to be. If the series were headed there next weekend, I’d be more inclined to expect the pair to tangle on the track fighting for position. But given that they have nearly a month to talk about their Talladega contact, move forward and refocus on their ultimate goals of making the Championship 4, it’s hard to imagine either driver will be thinking about this contact later this month.

Did He Just Say That?

Following the conclusion of the Truck Series race, the number of cautions, combined with the red-flag period to clean up the Big One put the FOX Sports 1 broadcast over its time limit… again. You’d think by now the executives at FOX would have figured out a superspeedway race is very rarely going to finish during its actual timeslot and extend the window. But I digress.

The abrupt ending to the FS1 broadcast sent many clamoring to Twitter, including myself, looking for words from the post-race winner, something from the runner-up, a condition update on those who wrecked on the final lap. Any information that should have been relayed before going off air and wasn’t. That’s when I came across this little gem.

Talladega track president Brian Crichton tells fans on the PA system re: Fogleman: "That's the way a truck should look when it finishes a race at Talladega Superspeedway."

Say what now? On the surface, it appears the track president came out saying he actively wishes for crashing at the superspeedway. And if that’s the case, shame on him. Anyone who’s been watching NASCAR even as recently as the last two years knows what we saw at the conclusion of the Daytona 500 in 2020 and the agony of waiting a few days before the good news that he was released from the hospital.

Sure, everyone who races in NASCAR knows that there’s an inherent risk that follows racing, regardless of what safety features are in place or what track they’re racing at. Safety aspects aside, though, the kind of large crashes we saw at Talladega, including those who wrecked as the checkered flag flew, come out to large bills for every team that was affected. It’s a recipe for disaster for those who struggle week to week.

Regardless of which way the comment was meant, it’s not a good look for the track president to be making a comment like that while the race winner is in the infield care center being evaluated after a crash.

After multiple playoff drivers faced adversity at Las Vegas Motor Speedway last weekend, Talladega wasn’t all that kind to them either. The first to fall was Zane Smith, who was out with terminal damage following the Big One on lap 58, and while Chandler Smith also received damage, he was able to continue after meeting minimum speed. Carson Hocevar and Stewart Friesen were collected a handful of laps later in the second smaller multi-truck wreck.

Meanwhile, Crafton, Rhodes, Creed and Nemechek all took the white-flag lap inside the top 10 with a shot to win. But the trio of Crafton, Rhodes and Creed were caught up in a white-flag wreck before Nemechek was spun at the finish. He crossed the finish line fourth, despite the wreck and came out on top of the carnage in the best position of any playoff driver.

Just a week after totaling Hill Motorsports’ only remaining mile-and-a-half truck at Las Vegas, Tyler Hill scored a career-best second-place finish and narrowly missed out on stealing the spotlight with a victory. It’s just the second top five for Hill Motorsports and beats a fifth-place run by Timmy Hill at Martinsville Speedway in 2019.

After Creed opened the Round of 10 with back-to-back wins by a playoff driver and was followed up by Chandler Smith to close it out, the Round of 8 has seen two straight non-playoff drivers in victory lane. Christian Eckes, who’s running a part-time schedule this season, and Fogleman scored their first career wins in consecutive weeks. That means no driver is safe heading into Martsinville Speedway later this month for the final race to set the Championship 4.

Fogleman became the third-straight driver to score their first career Truck Series win at Talladega. Spencer Boyd and Raphael Lessard accomplished the feat in 2019 and 2020, respectively. Saturday’s race also marks the fourth-straight where the winner has led just the final lap. Timothy Peters did it in 2018.

After spending this season splitting his season between the No. 98 ThorSport Racing Toyota and the No. 9 Rohrbaugh Racing Chevrolet, Grant Enfinger will have a full-time ride with GMS Racing for 2022. The organization announced he’ll pilot the No. 23 Champion Power Equipment Chevrolet next season. Enfinger joins Jack Wood as the only two drivers confirmed for the GMS stable for 2022 as of press time.

During pre-race coverage for Talladega, FOX Sports 1 revealed Austin Hill will not return to the Truck Series with Hattori Racing Enterprises next season. Instead, he’s seeking a full-time ride in the Xfinity Series. As of press time, there’s no word on who will run for HRE in 2022.

NEWS: Austin Hill will leave Hattori Racing at the end of the 2021 season. pic.twitter.com/3SxKxx19Y5

Meanwhile, during the ARCA Menards Series race at Salem Speedway, MAVTV indicated Corey Heim is headed to the Truck Series next season. While there was no mention of where he might land, you’d have to assume that, given his history with Kyle Busch Motorsports and that he’s a Toyota driver, he’ll land at the organization in 2022. The bigger question may be whether he’ll replace Chandler Smith, Nemechek, or if it’ll be a shared effort behind the No. 51 again.

.@MAVTV mentions that @CoreyHeim_ will be going racing in the NASCAR Camping World Truck Series next season.

Heim has one scheduled NCWTS event left this season, the series' next event at @MartinsvilleSwy, driving the No. 51 for @KBMteam.#ARCA | #NASCAR

Points Report: Nemechek holds the top spot in the standings with just a one-point advantage over Rhodes. Crafton and Creed sit 26 and 31 points behind the leader, respectively, and round out those above the cut line for the Championship 4 heading into the final race of the Round of 8 later this month.

Friesen sits just five points below the cut line in fifth, though he’s still well within reach to point his way into the Championship 4 without a win at Martinsville. Meanwhile, Chandler Smith, Hocevar and Zane Smith round out the top eight and find themselves 30-plus points below the cut line. The trio face a must-win situation at Martinsville to keep their championship hopes alive.

Unbelievable I can’t thank everyone enough who works there guts out for this team!!! @tate_fogleman did an amazing job. Thanks to all our supporters – IT’S DEGA BABY https://t.co/Zi0nkFDolo

How about that!!!! So close to a win! Super proud of my brother @Tyler_Hill_ and our @HillMotorsport team! Happy to have our long time supporters @HairClub on our truck for an exciting finish! pic.twitter.com/jWiaRDvzpm

Did everything he could today…

P6! An eventful day culminates with a great finish and a great points day for the team! That truck has some magic in it! Thank you! @fly_alliance @Carquest #Talladega pic.twitter.com/tXiGX3FrsM

Hard fought day for p7! Always thankful for the opportunity and stoked to see my @youngsmtrsports teammate @tate_fogleman pick up the WIN!

P9 today at @TALLADEGA! So damn close to the W today! Thank you @GMSRacingLLC

motor damage but I just didn’t want to not finish the race. Getting out of the truck and hearing everyone in the stands cheering when I got out was a very emotional feeling that I’ll never forget. We’ll win here someday. Thank you to everyone for the support and to Golden Eagle

Up Next: The Truck Series will take a few weeks off before completing the Round of 8 at Martinsville Speedway in a tripleheader with the NASCAR Cup and Xfinity series. Coverage for the United Rentals 200 begins Saturday, Oct. 30 at 1 p.m. ET on FOX Sports 1.