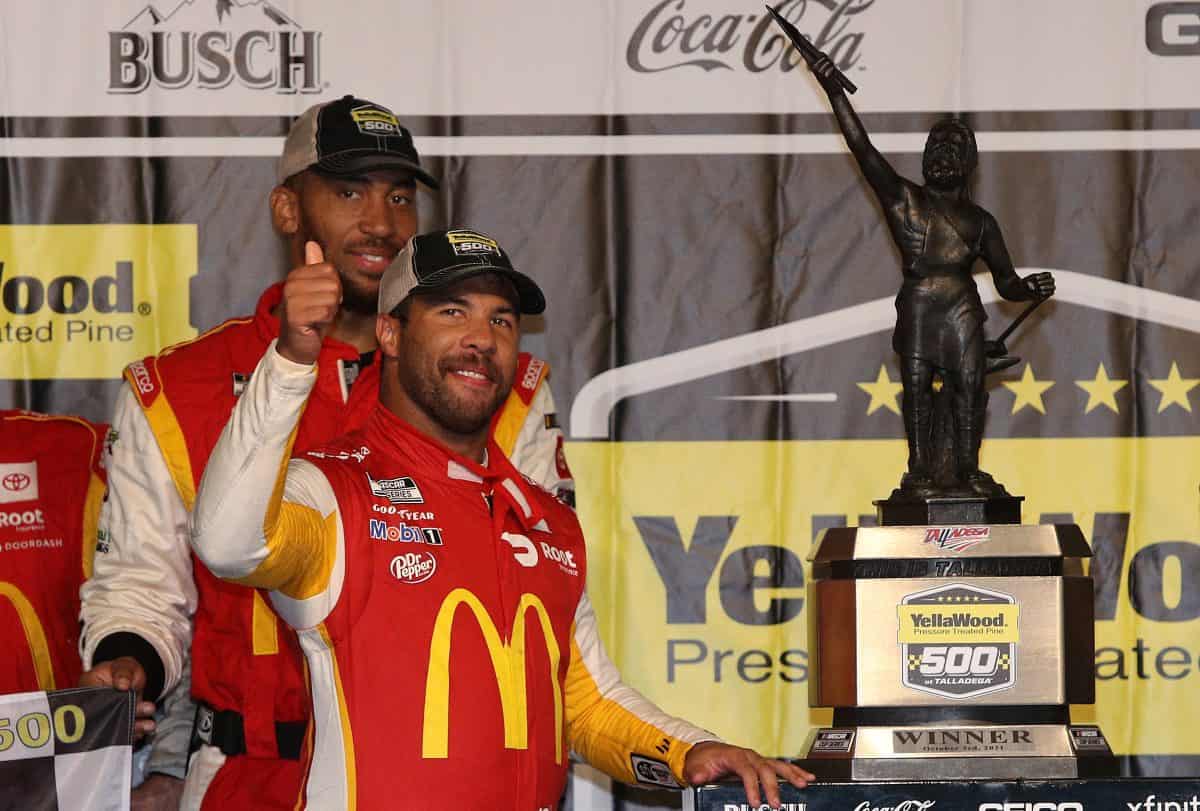 The NASCAR Cup Series’ YellaWood 500 at Talladega Superspeedway was postponed a day by rain, and even as the skies threatened even more precipitation, Bubba Wallace raced his way to the front as stage two wound down, running up front when a crash brought out the caution flag on Monday (Oct. 4).

Then rain hit, forcing the field to pit road and, after a number of efforts to dry the track, NASCAR called the race just past halfway and Wallace secured his first career victory and 23XI Racing’s first-ever win.

Wallace also becomes the first Black driver to win a Cup race in nearly 60 years, after Wendell Scott did so in 1963.

“Part me is sitting there waiting, you know, it’s not over with,” Wallace said on pit road. “Just sit there, bide our time. If we go back racing, that’s fine, we’ve put ourselves in position. But we had so many cool fans behind us at the pit box just cheering for it to rain, so that kind of amped up the intensity a bit.

“[…] New team coming in, getting a win late in the season, reminds me of 2013,” he added. “Waited so long to get that first truck win, I know a lot of history was made today I believe, which is really cool, but it’s about my guys, about our team, about what we’ve done. Appreciate [co-owner] Michael Jordan, appreciate [co-owner] Denny [Hamlin] for believing in me, giving me the opportunity. […] It’s pretty fitting that it comes here at Talladega.”

“I never think about those things,” Wallace said, visibly emotional when asked about being the first Black driver since Scott to win a Cup race. “When you say it like that, it obviously brings a lot of emotion, a lot of joy. To my family, fans, friends, it’s pretty damn cool. Just proud to be a winner in the Cup Series.

“This is to all those kids out there that want to have an opportunity at whatever they want to achieve and be the best at what they want to do. You’re gonna go through a lot of bullshit, but you always gotta stick true to your path and not let the nonsense get to you. And stay strong, stay humble, stay hungry. Been plenty of times where I wanted to give up, but you surround yourself with the right people and it’s moments like this you appreciate.”

'@BubbaWallace is the second Black driver to win in the @NASCAR Cup Series, and the first to do so since 1963 with Wendell Scott.

Hear from the @23XIRacing driver after the historic win. #NASCAR pic.twitter.com/fKTvclLeGh

The triumph came after a weekend of firsts, with Tate Fogleman and Brandon Brown scoring their first wins as well in the Camping World Truck and Xfinity series, respectively, on Saturday (Oct. 2) at the superspeedway.

Stage one was peppered with three- and four-wide racing throughout, culminating in a small crash in the trioval as the laps wound down. Justin Allgaier, in a one-off appearance for Spire Motorsports, was turned by William Byron and slid up into Byron’s Hendrick Motorsports teammate Kyle Larson, who suffered significant damage.

Chase Briscoe also clipped the No. 77 and was forced to make repairs, while Buescher won the opening stage under yellow for his second such victory of the year.

Larson’s team attempted to repair the No. 5 and got the Chevrolet back out on track, but the right-front tire blew and sent the car into the wall. It subsequently shredded, spewing debris all over the track and bringing out another caution.

Under caution, an early pit stop put Cody Ware out in front and a pop-up shower set in in turns 1 and 2, forcing the field to pit road for a nearly 20-minute red flag. Another round of pit stops followed the stoppage, leading to a front-row duo of Justin Haley and Corey LaJoie on the restart.

Hamlin and Bell both spent time at the front and they were soon joined by a charging Alex Bowman and Ricky Stenhouse Jr., leading to the second crash of the day.

A push from Chase Elliott gave Stenhouse a boost, and the No. 47 clipped Bowman and sent the No. 48 into the outside wall, triggering a crash involving nearly a dozen cars.

A run for Kurt Busch sent the No. 1 to the front, while Wallace weaved his way through the pack and found himself near the front.

Out front, Wallace blocked both lanes as Keselowski and Logano both got runs, and was leading the pack as Ryan Preece, Matt DiBenedetto and playoff driver William Byron were involved in a crash.

Wallace was out front as the field came down pit road, rain setting in once again with three laps remaining in the stage.

"RAIN LIKE HELL, BABY!"@BubbaWallace leads with rain in the area. He's looking for his first @NASCAR Cup Series win on NBCSN. pic.twitter.com/bkIEwOoe6A

'@BubbaWallace is doing the rain dance, leading past the halfway mark. #NASCAR pic.twitter.com/nEpYd1Q0pY

After a lengthy delay and NASCAR attempted to get the jet dryer crew back out on track, operations were halted and Wallace was declared the winner.

Ryan Blaney, Hamlin and a number of other drivers offered their congratulations as Wallace celebrated on pit road, and others joined the conversation on Twitter, including Bill Lester.

Finally, it's official, you've done it! Congratulations @BubbaWallace. So proud of you and what you've accomplished. Your win moves the @NASCAR needle forward on so many fronts. Glad I was a witness. @23XIRacing #BLM

The Cup Series next heads to the Charlotte Motor Speedway ROVAL for the final race of the Round of 12. Four drivers will be eliminated after the race Oct. 10. Green flag is set for 2 p.m. ET, with coverage on NBC.

Congrats to Bubba. I am always happy for any driver getting his first win, even if there is an asterisk.

Congrats to Bubba and team 23. It was a weekend for first time winners in all 3 series this weekend at ‘dega.

I watched some of all three races and saw the end of all three, and at the time of each knew there was a 1st time winner, but until you said that I did not recognize that fact. Only at Talladega,

I checked online while at work and saw where weather would be issue again today. Hopefully the rain is gone by weekend for Charlotte.

thanks. i forgot about those.

thank you. i was spinning my wheels, could not remember austin’s other wins. i apologize.

Congrats to Bubba. Sometimes you do everything you can to take advantage of an opportunity and hope for a little luck. That’s as much a part of racing as pushing an accelerator and turning a steering wheel.

Glad to see those Penske Fords looking stout this afternoon. Unfortunately for HMS, it was a dismal day, with hard wrecks involving all their drivers except Elliott.

I was actually enjoying the race and hated to see it end early. Way-too-early forecasts for Charlotte this weekend don’t look favorable, but they can always break out the rain tires… (sorry… having a deja vu moment).

Always good to see a first time winner for a driver or a team. At first I thought they would call the race as soon as they stop the cars on pit road. But then that would be too obvious. They had to show that they were committed to dry the track. But as soon as the next rain drop came I new the race would be over.
The thing that perplexes me is how much the media makes about Bubba being an African-American. That was not the case with James Stewart (Motorcycle Champion), Lewis Hamilton (F1 Champion), Anton Brown (Drag Racing Champion), Tiger Woods (Golf Champion). Bubba’s father is white, his girlfriend is white, his assistant at the racetrack is a white girl. You can’t compare him to Wendell Scott.
Bottom line Bubba earned this win. I hope he and the team get many more. He has proven to be a NBC face of NASCAR.

Chuck
Reply to  Tom B

Chase Elliot wins rain shorted race at COTA: “He raced great today and deserves it (too bad it went short, but that’s the rules, so it counts!)”

Bubba Wallace wins rain shorted race at Talladega: “NASCAR handed it to him”, and “It’s the only way he will win”

wow this is the most comments i’ve seen on any article in a very long time.

They did it! NA$CAR found a way to gift Bubba win.

There was no way NASCAR was restarting this race again. Their perfect scenario fell into their laps and they weren’t going to blow it. They will get all that free publicity that they could never buy.