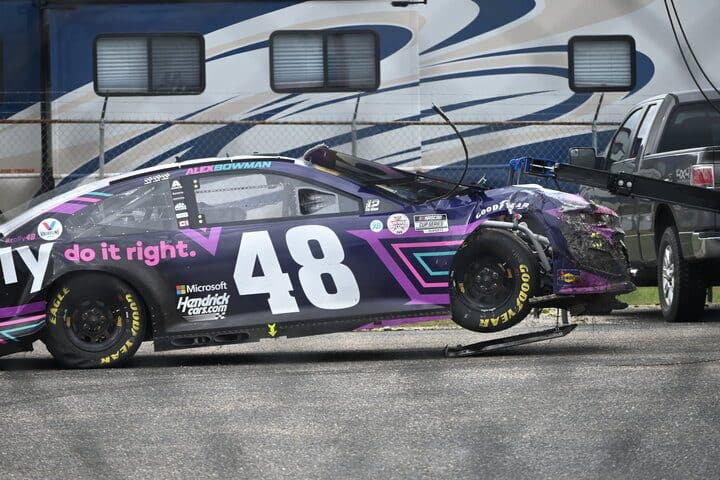 LINCOLN, Ala. – Talladega Superspeedway is a tricky place to race in general.  Add the NASCAR Cup Series playoffs to the equation and it just churns your stomach.

For Hendrick Motorsports teammates Alex Bowman and William Byron, they’re feeling a little stomach sick this evening. Talladega effectively derailed their championship hopes going forward, barring a miracle win to land them in the Round of 8.

In Bowman’s case, he was going for the lead on lap 98 with help from Ricky Stenhouse Jr.  Stenhouse is known as an aggressive driver in the draft and prodigious with bumpdrafts.  Unfortunately, the bumping was a little too hard this time as Stenhouse caught Bowman wrong.

Ricky Stenhouse Jr. gets into the back of Alex Bowman, and we've got a big crash!

The contact turned Bowman head-on into the wall entering turn 3, sliding down the track where he was hit by Ross Chastain.  After a couple of more spins, his No. 48 Ally Chevrolet came to a halt in the grass, unable to continue in the race.  The wreck puts Bowman into a must-win situation in Sunday’s (Oct. 10) Bank of America ROVAL 400 at Charlotte Motor Speedway.

“Leading was where I wanted to be,” Bowman said after exiting the infield care center.  “However, I’ve been crashed going into turn 3 leading a couple of times here now.  I’m bummed out about that.  But, what are you going to do?”

In response to a question about whether the intensity was building due to impending weather, Bowman didn’t necessarily agree with it.

“The whole race has been pretty intense, but we weren’t doing anything crazy,” he continued.  “We weren’t switching lanes [and] throwing big blocks.  It was just a push that went wrong [that put me out].”

Bowman entered Monday’s race seventh in points, 44 behind teammate Kyle Larson.  It was a decent position to be in, but one where he needed to be careful.  The crash dropped Bowman down to 12th, 52 points out of eighth.  In order to advance, he would need to win at Charlotte because he wouldn’t earn enough points otherwise.

Teammate William Byron was nowhere near as aggressive as Bowman in running to the front.  However, Byron also ended up as a victim of circumstances.

Ryan Preece was getting pushed towards the lead on the outside line when he was the recipient of an odd bump from Chris Buescher.  Much like with Bowman’s crash, this hit spun Preece head-on into the wall, where he slid down the track and hit Byron.

The hit on the right front corner of Byron’s No. 24 car put him into Matt DiBenedetto and then into the outside wall, causing a fire to break out.  Byron drove it back to the beginning of pit lane before stopping and getting out.

“I had cars underneath me and [that left me] with nowhere to go,” Byron told Frontstretch in a matter-of-fact fashion.

Byron dropped from eighth to 11th after finishing Monday.  He’s 44 points out of eighth, with a situation only slightly better than his teammate.  Jumping over two others and making up that deficit is highly unlikely, meaning he’ll probably need to win on Sunday as well.

In Byron’s case, the ROVAL at Charlotte Motor Speedway is far from the worst place for him to go in this situation.  Byron has a pole there (2019) and has finished sixth the last two years.  He was also running eighth in 2018 late before getting eliminated in a restart crash.

As for Bowman, the task is arduous, but doable.  He has never finished worse than eighth at the ROVAL, including a second-place result in 2019.

Overall, Monday was a tough day for Hendrick Motorsports in general.  In addition to Bowman and Byron crashing out, Larson was involved in the first major incident of the day when Justin Allgaier’s No. 77 car came down and hit the No. 5 Chevrolet.

Larson would go on to blow a tire and finished the race in 37th, four laps off the pace. That meant Larson, Bowman and Byron combined to score a total of four points at Talladega.

Well they both can’t win so one of them is out for sure.

Byron knocked Allgaier into Larson and Elliott bumped Stenhouse when Stenhouse’s bumper was against Bowman and sent Bowman spinning. Should be a fun meeting Monday morning. Byron getting knocked out was poetic justice.