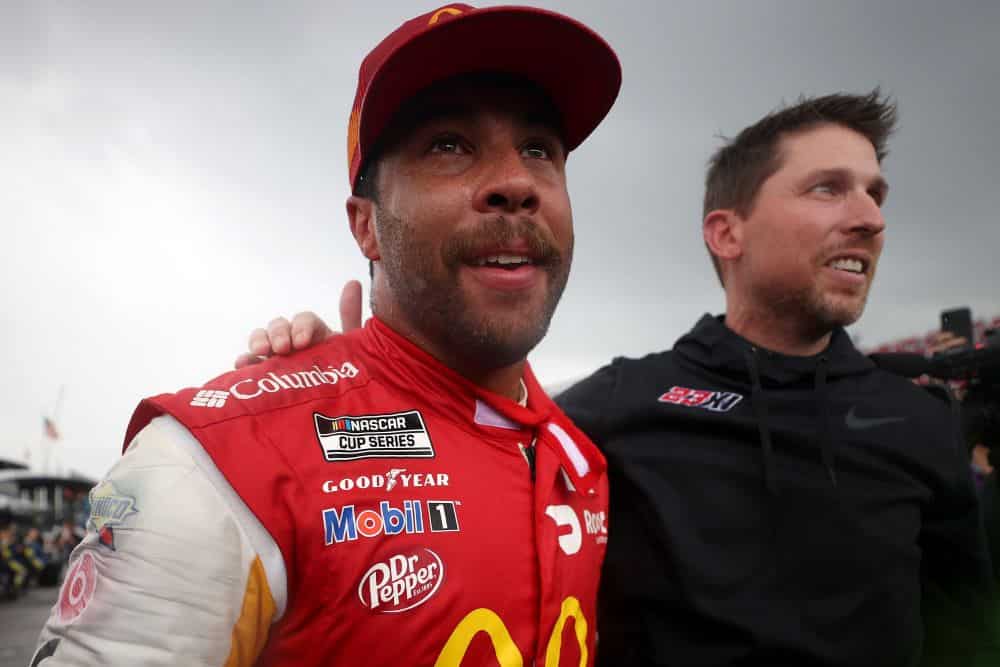 LINCOLN, Ala. – Daytona and Talladega have been two of Bubba Wallace‘s strongest tracks since he first arrived in the NASCAR Cup Series in 2017. He’s finished second in the Daytona 500 (2018) and been right up in contention to win on multiple occasions.

Monday [Oct. 4] saw Wallace just barely avoid the crash that eliminated Alex Bowman on lap 98, then charge up to the front after pitting for tires to take the lead on lap 113. A couple of laps later, Ryan Preece spun into the wall on the backstretch to bring out the yellow. During that yellow, the rains came once again. After lightning was sighted and heavier rains entered the conversation, NASCAR made the call to declare the race complete, giving Wallace his first career NASCAR Cup Series victory.

Given what he has in his corner, Wallace was quite confident entering the race.

“Being a part of this 23XI [Racing] deal, they are so big on preparation,” Wallace explained during the post-race Zoom. “Denny [Hamlin] is big on leading up to days before the race making sure you’re doing your homework, doing your debriefs. I was sitting there reading over our notes, looking at our previous race here in the spring. I was like, Man, our first stage average was pretty damn good. I think we were like fourth on average. After that, we were like 15th to 20th second and third stage. We ended up, I think, 18th or so.

“You always talk about the good plate racers,” Wallace continued. “These guys are great at [plate races], Penske cars, Denny is really good. It’s like, “damn, I’m good at getting good finishes, but I don’t consider myself as a good plate racer. Let’s turn it up a notch and try to become a pretty damn good plate racer today.'”

Wallace’s triumph is the first for an African-American racer in what is now the NASCAR Cup Series since December of 1963 when Wendell Scott won at Raceway Park in Jacksonville, Fla. It’s also something that the sport as a whole could possibly build on. Wallace knows what he needs to do in order to expand NASCAR’s African-American audience.

“I think about the next generation that wants to be a part of this sport,” Wallace said. “I think this gives them a little bit more motivation, a little bit more fuel in the tank.  It’s important for that because we look at our demographic of our sport and we want it to change so desperately. With everything that’s gone on in the last 16 months, we are trending upwards.

“I just got to go out and keep doing what I got to do,” Wallace added. “I’m just going out to win races and put on the best show I can to show, hey, be part of this sport. Either be at the track or sit on the couch, have a party, watch at home. Whatever it may be, just tune in. You never know what can happen, you could be enjoying moments like this.”

It sounds ridiculous on paper, but there is a point to a statement like that. We’ll use Tiger Woods as an example. When Woods was coming into his own in the late 1990s, he adopted what could be best be described as a limited schedule for the PGA Tour. Woods would compete in just enough tournaments to be considered a regular on the PGA Tour and no more. The rest of his schedule would be supplemented by events overseas. This schedule likely irritated a lot of people with the networks that covered the tour at the time and quite a few of the tournaments.

The result of this was that there was a substantial jump in TV ratings and prestige whenever Woods showed up. The sport seemingly had a completely different, more diverse audience whenever Woods was in the field, and especially if he was in contention to win. While Wallace will not be using such a strategy in NASCAR, him being in contention to win races could have a positive affect on TV ratings and NASCAR’s exposure to minority communities.

For Wallace, getting back to victory lane was key for his confidence.

“I was one of those people that was telling myself that I haven’t won,” Wallace explained. “It’s tough to kind of get out of that mentality.  It’s like, man, you just want to go out and compete and win. It just so [happened to come] today.”

That said, he may now be viewed as the driver that only won because the rain shortened the race to 500 kilometers. The thing is, everyone knew that it was a possibility. The weather forecasts in the Birmingham area Monday morning indicated a 60% chance of rain.  Anyone driving to the track from Birmingham would have experienced both dry and wet weather just getting there.

For Wallace, Monday was his first victory of any kind since 2017, when he won for MDM Motorsports in the Camping World Truck Series at Michigan International Speedway. That victory was “encumbered” by NASCAR due to unapproved vent holes on the bed top, resulting in the team being penalized 10 owner points (Wallace had put in for Xfinity Series points that year) and crew chief Shane Huffman being suspended for a race.

While Wallace is not really confident that he’ll have a good run at Charlotte Motor Speedway’s ROVAL this weekend, he can be sure that he won’t have to answer any more questions about when he’s going to win a race. He’s already done that.

History was made how? As the second person to do something?

Bill B
Reply to  John W.

How dare you question the desired narrative.

Did he get the trophy?

I think he gave it to his dad.

First in the modern era. And first with crew chief who uses a wheelchair.

Bill B
Reply to  Marc

So Bootie also made history??? First crew chief who uses a wheelchair with an African American driver in the modern era.
Wow, all kinds of history was made yesterday.

Wait a minute, it gets even better. First driver with an African American mother, Euro American father, crew chief who uses a wheel chair, with an African American co-owner who was a HOF basketball player and probable HOF driver co-owner who was also in the race, and also during the NASCAR playoffs.
Damn, you can’t make this stuff up, it practically writes itself.
How historical.

That means Bubba is now a lock for the NA$CAR Hall Of Fame and he has his speech ready.

He wasn’t the winner, he was leading when the race was called. Doesn’t mean that he actually won, it means that nature took over and the 20th place driver got a first place finish and likely he will could keep his job for a couple of years now because of all the PC crap going on in CRAPCAR now.

Bill B
Reply to  jdquick

20 (or 50) years from now, when no one remembers the specifics of the race, it will be listed as a win. So maybe he won by default but he still won.

I say Good for Bubba! He deserves this win just as much as anyone else. In races like this it’s all luck and strategy, and he and his team positioned themselves in the right place at the right time. No other racecar driver has ever given back a win, trophy, points, or purse money because the race was shortened due to weather, and neither should Bubba.

I would like to see him show improvement and get some wins outside of Daytona/Talladega, or I fear he will become another Michael Waltrip and 20 years from now we’ll be moaning about his annoying, goofy antics in the Fox pre-race shows and booth! lol

RCFX1, I’d like to buy you a beer! It was almost painful to see the unabashed promotion of that highly sponsored B word in those days. To me she was an insult to thousands of more talented local and regional drivers. Nascar loved her but I saw her as a Nascar joke.

Hey Phil- why is bubba African American ! That’s his mother’s side. If he was racing with his father’s genes today would he still be making history.

Good point Echo. Instead of being the 2nd African American to win a race, he is the 1st driver with an African American mother and Euro American father to win a race. It’s always best to be THE FIRST and also proves history was indeed made to all those that question if in fact it was. Thanks for bringing that to light.

EDIT: Wow there must be people camping out on this website. 4 thumbs down in less than 15 minutes…. I’ve set a record…. how historical.
Nothing makes me happier than thumbs down votes. It lets me know I am doing something right.
I dare anyone to try to beat that one.

Imagine if Ty Gibbs “wins” an event like that.