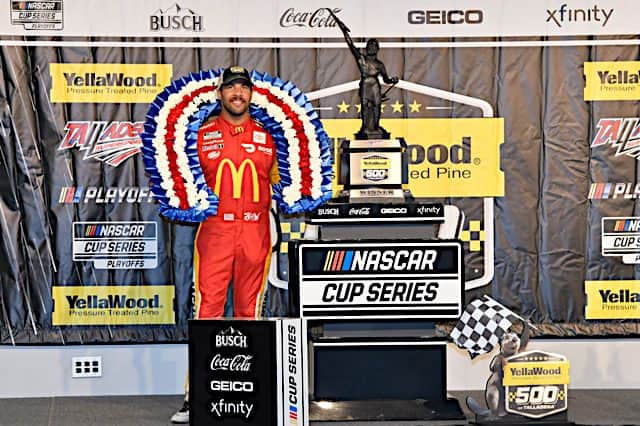 It was certainly a good weekend to be a driver seeking their first career win in a NASCAR national touring series race. That’s because, for the first time ever, all three were won by first timers during the same weekend at the same track. Tate Fogleman kicked off the trifecta on Saturday with a bizarre Camping World Truck Series victory that resulted in his truck being towed to victory lane. Then Brandon Brown got the Xfinity spotlight when the speedway ran out of daylight. Finally, Bubba Wallace broke through when rain washed out the final 70 laps of the Cup event.

It is rather remarkable that the feat had yet to occur. There have been multiple first time winners in every truck season in existence. Triple header weekends are plentiful but the closest we’ve been to a trio of first time winners was Atlanta Motor Speedway in March of 2005. Carl Edwards won the Xfinity and Cup races, his first in each division. Ron Hornaday Jr edged out Bobby Labonte for the truck win, depriving the 2000 Cup champion of a first career truck triumph. It didn’t postpone Labonte’s celebration a great deal, as he claimed his one and only win a week later in Martinsville.

The only other such weekend to occur was in August of 2016, where Brett Moffitt and Kyle Larson each claimed their maiden Truck and Cup wins, respectively, at Michigan, while Michael McDowell‘s first Xfinity win came at Road America.

Anyways, here are a few more notable numbers from a manic Monday in Talladega.

While this weekend may have produced Wallace’s first Cup win, it marked the third win for sponsor McDonald’s. McDonald’s went to the winner’s circle twice in 1994, on the hood of Junior Johnson’s Ford driven by Jimmy Spencer.

It’s been a staggering 67 years since the No. 23 won a NASCAR Cup Series race. Though making nearly 900 starts, 23 hadn’t been on the side of a winning car since Al Keller won a 200 lap race at the old Oglethorpe Speedway in Savannah, GA back in 1954.

Anthony Alfredo got his first too this weekend: first top 10 Cup result, that is, in his 31st start. The rookie driver improved on his previous best, a 12th from the first visit to Talladega back in April. Alfredo also led a lap, his fifth of the year, and earned the eighth lead-lap finish of his Cup Series career.

Kevin Harvick scored a top 10 of his own on the Alabama high banks, the fifth such finish in a row for the Stewart-Haas Racing veteran. It’s the longest streak of top 10s for Harvick since his sweep of the Michigan double header last August capped off a 10 race stretch. He and Denny Hamlin are the only drivers to finish in the top 10 of each playoff race thus far.

Under the current points format, the playoff race at Talladega had always been won by a championship-eligible driver. That’s seven consecutive races coming into this year’s edition. Five playoff contenders occupied the top eight positions when the race was called but not the top spot.

Only two of the 105 Cup races held at Talladega have been shortened by rain. Plenty have gone to overtime-induced extra laps, but the YellaWood 500 being washed out is a rare occasion. The only prior premature ending due to inclement weather was the July 1996 visit. On that day, wet weather caused two lengthy delays and NASCAR was forced to end the race early with darkness closing in, handing Jeff Gordon his first checkered flag on the 2.66 mile trioval.

Jordan Anderson had just one Xfinity Series finish better than 22nd before this weekend and lots of finishes of 40th. Anderson, who once ran 40th in five consecutive races, took advantage of the misfortune of some of the usual contenders to earn the best outcome of his career (fifth) in just his 18th start in the series. Anderson’s team has been solid with other drivers like Tyler Reddick, Josh Berry and Ty Dillon behind the wheel. Still, it had to feel good for Anderson to finally get a result like that for himself.