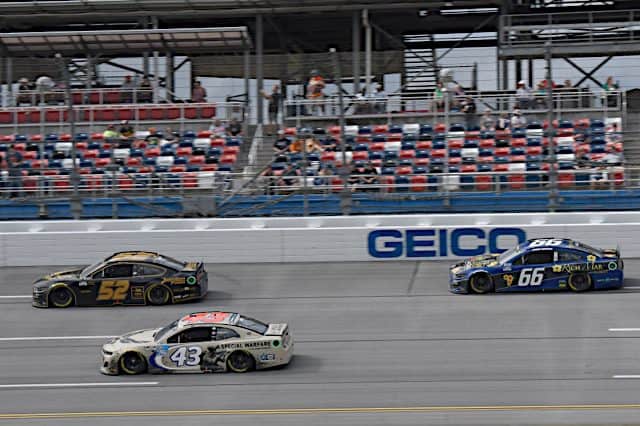 They say anything can happen at Talladega Superspeedway. And by anything, they mean ANYTHING. Be it red flags for crashes and rain, a lack of daylight, big crashes, or a spin to win, Talladega contained it all in chaotic ways this weekend.

Starting with the NASCAR Cup Series’ YellaWood 500 (Oct. 4), the race was moved back a day due to rain. For a while, it appeared that the race was going to be another Texas-2020 situation, a race that was held three days after the initial race date. This week in Talladega, rain was in the forecast for several hours of the day from Sunday through Wednesday. However, the race was able to take place, though it ended after 117 of the scheduled 188 laps.

There is one thing that produces more unpredictable results than Talladega and Daytona: rain. Dark clouds loomed over the 2.66-mile track for most of the day. Then, the skies opened right as a multi-car crash occurred near the conclusion of stage two. In the lead at the time was none other than Bubba Wallace. Wallace made a fantastic charge to the front that was several laps in the making when he started a third line mid-pack. The 23XI Racing driver found his way to the front, and made his move for the lead about five laps before the accident.

When the caution flag flew, sprinkles began to fall on the track. Those sprinkles quickly turned into heavy rain drops, forcing another red flag. If you want to see a team begging for rain in NASCAR, it is usually when they’re in the lead after the race is official, in this case after 94 laps. That’s exactly what happened, and despite a brief attempt to dry the track, lightning and rain forced NASCAR to call the race. The celebration was electric in the No. 23’s pit, as a nervous Wallace quickly turned elated about his first NASCAR Cup Series victory. It was his first win in 143 career Cup starts.

“Part of me is sitting there waiting, you know, it’s not over with,” Wallace told NBC Sports following the race being called. “Just sit there, bide our time. If we go back racing, that’s fine, we’ve put ourselves in position. But we had so many cool fans behind us at the pit box just cheering for it to rain, so that kind of amped up the intensity a bit.

“New team coming in, getting a win late in the season, reminds me of 2013,” he added. “Waited so long to get that first truck win, I know a lot of history was made today I believe, which is really cool, but it’s about my guys, about our team, about what we’ve done. Appreciate [co-owner] Michael Jordan, appreciate [co-owner Denny Hamlin] for believing in me, giving me the opportunity. […] It’s pretty fitting that it comes here at Talladega.”

See also
The Big 6: Questions Answered After the 2020 YellaWood 500

Wallace becomes the second African-American driver to win a NASCAR Cup Series race and first since Wendell Scott in 1963.

“I never think about those things, and when you say it like that, it obviously brings a lot of emotions, a lot of joy to my family, fans, friends,” Wallace said about the achievement. “You’ve got to stay true to your path and not let the nonsense get to you and stay strong, stay humble, stay hungry.

While history was made in several ways and will dominate headlines, the simple truth is that Wallace is a racer. Now, he’s a NASCAR Cup Series winner. It has been a long journey for a driver with many ups-and-downs. Just a few years ago, his career was at a crossroads when he finally got his chance to fill in for Aric Almirola in a few races for Richard Petty Motorsports. In return, his full-time ride at Roush Fenway Racing in the NASCAR Xfinity Series shut down operations.

Wallace was tapped as RPM’s full-time driver in 2018, and it was a roller coaster from there. When NBA legend Michael Jordan and Denny Hamlin announced their coalition to form 23XI Racing, it was a golden opportunity for Wallace. Things had been rocky this season, with Wallace not recording a top 10 until Pocono Raceway in June. Since then, however, the team has improved, and now they have the biggest check mark to add for a young team: victory.

NASCAR’s newest winner quickly pointed credit to his team after the victory, and what a story it is when you look into it. Bootie Barker was named Wallace’s crew chief just a couple of weeks ago as regular crew chief Mike Wheeler moved to full-time Director of Competition. Monday’s win was Barker’s first Cup win in 484 starts atop the box. Michael Jordan and Denny Hamlin joined the ranks of owners to win in the Cup Series. 23XI Racing becomes the third team in the past three years to earn their first Cup victory as an organization. And McDonald’s, the main sponsor on the car, visited victory lane as the primary for the first time since the ’90s.

Despite the race being cut short, it is an illustrious first win for Wallace, who earned the victory in his home state of Alabama. The 27-year-old grew up just over four hours away in Mobile, Ala. He also joined Michael McDowell and Christopher Bell as first-time Cup winners in 2021.

Wallace’s maneuvers to hold the lead made the win even sweeter, and it gives 23XI Racing a lot of momentum heading into 2022. History was made in several ways on Monday, and the future is bright for this young team.

Typically, I take a closer look at other Cup drivers who were among the top underdogs at the finish. This time, however, a unique weekend calls for a unique segment. For the first time in NASCAR history, the sport saw all three series produce a first-time winner. Ironically, all are underdogs in the sport, much to the health of this column.

In Saturday’s Xfinity race (Oct. 2), the race didn’t reach the entire scheduled distance either. A late, multi-car crash ignited a lengthy cleanup. Several other wrecks throughout the race contributed to the event heading into the late evening. As the sun set over the track, visibility became difficult. As a result, the race was called. When NASCAR looked at the last scoring loop, it was Brandon Brown edging Brandon Jones for the victory. The Woodbridge, Va. native earned his first career victory in his 114th start. The celebration felt more like one following a team’s victory in the Super Bowl.

“You can ask my neighbors at Coastal Carolina, I did plenty of burnouts to practice for this moment,” Brown told NBC Sports after the win for his own team, Brandonbilt Motorsports. “[…] It’s a dream come true. A Talladega winner. […] Dad, we did it!

“Everything shifted top to bottom so much, it was like, ‘OK, let’s just stay patient where we’re at and hope for the best,” Brown said. “We saw our moment and we seized it. I’m just so proud of Brandonbilt Motorsports and so proud of our team, here and at home and everyone that worked on our team since the beginning.”

Ahead of the Xfinity race was the NASCAR Camping World Truck Series race on NASCAR’s largest oval. In the end, Tate Fogleman earned his first career victory in dramatic fashion. After pushing John Hunter Nemechek past Todd Gilliland for the lead in the tri-oval. Fogleman began a serpentine maneuver to steal the victory. As Fogleman tried to save his truck, Nemechek came down to block, causing contact between the two. Nemechek spun across Fogleman’s nose. Fogleman’s No. 12 Chevrolet crossed the line first and spun into the inside wall after contact from Tyler Hill. For the second time in the last three weeks, a NASCAR winner did their victory interview from the infield care center.

“It was crazy,” Fogleman told Fox Sports following the victory. “I missed that first big wreck, got through the second one, and it felt like things were finally starting to go right finally on a superspeedway. I’d never finished a superspeedway race before. I had a good feeling about it.

“We lined up third there (for the final restart), and I knew we just had to be aggressive. … I got a push from behind, and we were able to do it.”

All three winning organizations achieved milestones that were a long time coming. As mentioned, 23XI Racing and Brandonbilt Motorsports earned their first wins. For Fogleman’s team in Young’s Motorsports, it was the team’s second victory, ironically at the track they earned their first two years ago with Spencer Boyd.

In the Cup Series, props also have to be handed to Erik Jones and Anthony Alfredo. Jones spent a large chunk of the race near the front, and it paid dividends in the end with a ninth-place result. It was Jones’s fifth top 10 of the season, tying Wallace’s mark with the team in 2020. It was also Jones’s second top 10 in the past three races.

“Good day for the Air Force Chevy,” Jones said after the race. “Thought we had good speed all day and kept it up front. Thought the race was coming to us and then the rain came. Proud of the effort to have a top ten and hopefully keep it rolling at the ROVAL.”

For Alfredo, it was his first career Cup top 10. While much of the attention at Front Row Motorsports was on reigning Daytona 500 winner McDowell, Alfredo mainly carried the torch for the team at Talladega, visiting the top 10 on several occasions. The speed and confidence appeared to be there for Alfredo, and he was rewarded in the end for it.

The U.S. Air Force schemes that adorn Richard Petty Motorsports’ No. 43 have been epic the past few years. It was no different at Talladega, as Jones sported the No. 43 U.S. Air Force Special Warfare scheme en route to his top 10 finish.

Just as things appear that they couldn’t get more unpredictable, more unpredictability is on the way for the Cup and Xfinity Series. Both series head home to Charlotte Motor Speedway for the fourth annual ROVAL race on the tracks’ infield road course. This gives road aces such as McDowell and AJ Allmendinger opportunities to shine and maybe even win.

In the NASCAR Xfinity Series, it is Jeremy Clements‘ last shot to advance to the Round of 8. Following apparent spark plug issues that relegated Clements to a 24th-place finish at Talladega, he sits 48 points back in must-win territory entering the final race of the Round of 12.

A few words from MJ on our first Cup Series win in team history. pic.twitter.com/J35urIAXEY

For the first time in @NASCAR history, we had first-time winners in Cup, @XfinityRacing, and @NASCAR_Trucks on the same weekend at the same track.@tate_fogleman, @brandonbrown_68, and @BubbaWallace get it done at @TALLADEGA! #NASCAR pic.twitter.com/AdEeTeKJxV

Three months ago, @brandonbrown_68 had some unsponsored races and made this incredible video about it.

Winners at @TALLADEGA!! Can’t thank everyone enough for all of the support. This one is special. pic.twitter.com/okZb6EJHyC

Another underdog milestone was the first top 20 finish for the lame duck team of Quin Hough, & Star Com Racing. Yes it was crash related, but they ran strong all race, & avoided trouble. It’s not like they were so far out back that they had time to avoid any trouble. A top 20 wouldn’t mean much to a lot of teams, but for them it’s almost like a win.