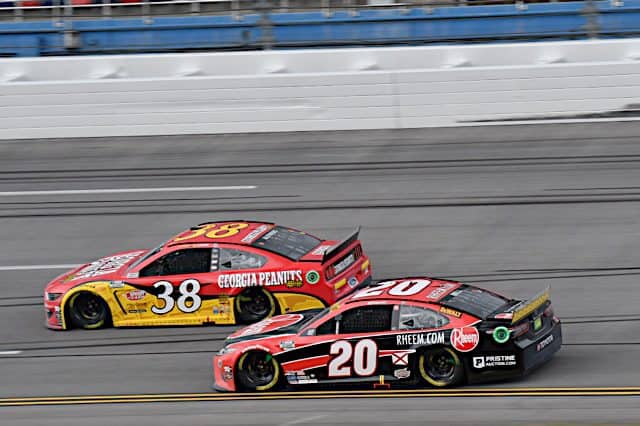 Lost in the shuffle of Bubba Wallace’s historic day, Alfredo kept his No. 38 Georgia Peanuts Ford clean and brought the car home 10th for his first career top 10 in the NASCAR Cup Series.

“We’re really proud of that,” Alfredo told Frontstretch in an exclusive post-race phone interview. “I think it could have been even better, but with how this year has gone so far, we’ll definitely take it and not get too greedy.”

Alfredo’s rookie season has been a frustrating one. In the 13 races since placing 17th at Nashville Superspeedway in June, the No. 38 team earned just one top-25 finish, which came at Darlington Raceway on Sept. 5 with a 24th-place effort.

Talladega, though, provided opportunity — one Alfredo knew was promising following a 12th-place performance in the spring.

However, the 22-year-old took a different strategy into the 2.66-mile superspeedway than he carried in April.

”Usually, we go with the survival strategy and hang out in the back,” Alfredo said. “But I kind of convinced my team to let me go out there and race and kind of take the reins off me for once and let me go have some fun up there with those guys and prove I belong — gain a little bit of respect and make some friends.”

The difference, Alfredo noted, stems in large part from the yellow stripes donning his back bumper. With less experience in the draft than most others in the Cup Series, veterans tend not to trust rookie drivers. Alfredo just wanted a chance on Monday afternoon.

“When you just appear up there at the end of the race, you don’t really have any help because nobody saw you all day,” Alfredo said. “But when you’re up there to start, you can show you have a steady wheel; you can push; you can be pushed and not have any issues. That was important to me to accomplish that, which we did very early on.”

After starting in 30th place, the NASCAR’s loop data statistics proved plenty positive for Alfredo, who netted the third-most green-flag passes all day with 335 behind only Ricky Stenhouse Jr. (368) and William Byron (343).

But if survival worked in the first Talladega outing, why try something different this time? The short answer: With only three other top 20s all season, Alfredo knows his team needs results. Building allies by proving he could be one himself was his top priority.

“We’ve had a lot of misfortune this year and just been in the wrong place at the wrong time or had a mechanical issue here and there,” Alfredo said. “So those things have been really frustrating to overcome and we really need the finish, right? And one of the only ways to guarantee yourself that is to survive and at least be there at the end. But doing that once and it working, I really wanted to go back to the same exact track and just try the opposite.”

That mission was accomplished by the time the race was called for rain near the conclusion of stage two, cut just short after a three-car crash between Ryan Preece, William Byron and Matt DiBenedetto.

Capitalizing on a superspeedway was critical for Alfredo because he knows it’s one of the few times per year the playing field is nearly leveled. It doesn’t hurt, either, that his teammate Michael McDowell won the Daytona 500 just eight months ago.

“You still have to have a fast car at least to lead lanes and make big moves,” he said, “so you have to be pretty smart still if you don’t have the best car, but it is a much more level playing field, absolutely. And that was I guess the other side of how I was able to convince my guys to let me go there. They wanted to be up there too obviously.

“As a team, we don’t get to race up front very often. And it’s not because of lack of effort or anything like that. But sometimes, 20th-place finishes a great day for us. But when you have the opportunity to go race up front and battle the guys who get to do it every week, you want to be a part of that. And when there’s only a handful of races like that in the year, those are the ones you go out there and you want to be up there every lap.”

The focus for Alfredo now shifts toward the final five races of 2021 in the short-term, but 2022 is getting nearer. Multiple reports note talks are ongoing between 23XI Racing and Front Row Motorsports, which could impact what charters are available for FRM next year and how many cars the team will run.

While Alfredo’s future in this mix is uncertain, he carried some optimism in his voice regarding next year’s status.

“Obviously when I first signed with Front Row, the reason they were willing to take a chance on me — someone who never ran full time in the Truck or the Xfinity series — was because they believed in me and planned to have me around for a while and I felt the same way,” Alfredo said. “I’m definitely, at this point, focused on finishing the year out strong and hoping we could build something for the future and see where it leads.”

Alfredo’s goal over the next five weeks is simple: continue to improve. He knows the Charlotte Motor Speedway ROVAL will be a challenge, as will Phoenix Raceway, where his first race was cut short thanks to an early incident with Cody Ware this spring.

Now, it’s just a matter of working more toward finishes like he earned Monday at Talladega.