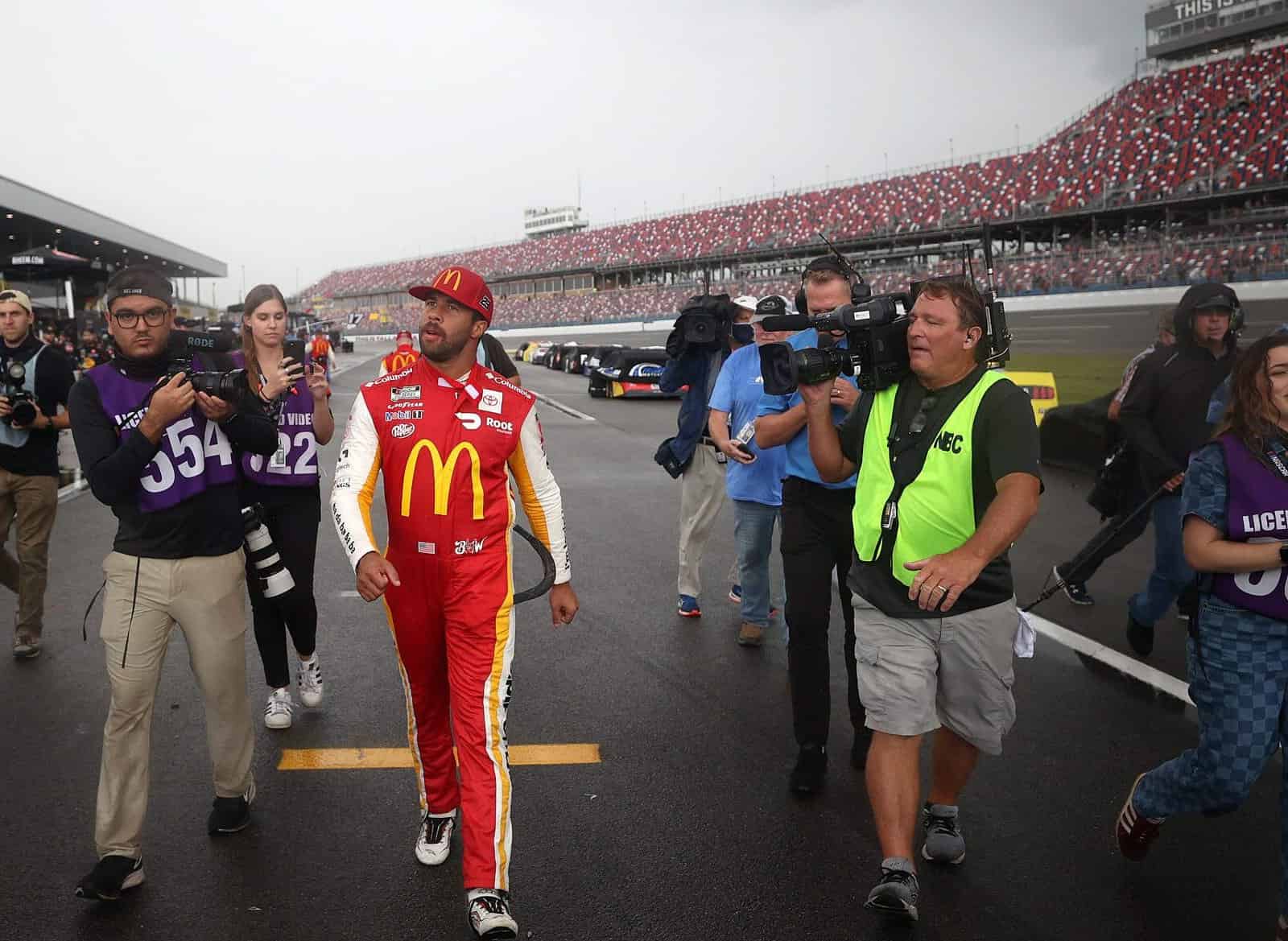 Where do you even begin?

With rain coming down and more to come, NASCAR declared the YellaWood 500 at Talladega Superspeedway over, three laps from the conclusion of stage 2.

See also
History Is Made With Bubba Wallace's Triumph

He also made history as only the second driver out of those 198 to be Black.

That’s clearly a big deal by itself.

One major distinction that separates Wallace from the first, Wendell Scott, is Wallace actually got to celebrate.

But it wasn’t Scott who took the trophy home.

Buck Baker, who finished second and two laps down, was initially declared the winner. Scott protested what may or may not have been a scoring “mistake,” and two hours after the race’s conclusion, long after the largely white audience had left, Wendell received his race winnings.

Weeks later, Scott was given an award before a race in Savannah, Ga. But it wasn’t the original trophy. It was a “piece of wood without a top or any kind of inscription.”

The original trophy was lost to history.

Fifty-eight years later and roughly 90 miles away from Jacksonville, NASCAR rectified its mistake.

At Daytona International Speedway during driver intros for Cup Series’ regular-season finale, NASCAR presented the Scott family with a specially made trophy, one made to represent the one that was denied to Scott in 1963.

Less than two months later, Wallace would celebrate his win.

“I think it’s sort of mystical,” Franklin Scott told Charles Blow on Monday. “I think the powers that be, the higher powers that govern everything, said that once Wendell Scott gets his trophy, then we’re going to let you get your win. … Everything’s not coincidental.”

.@NASCAR driver @BubbaWallace made history becoming the second Black driver to win the #NASCARCup. Franklin Scott, son of #WendellScott who was the first Black driver to win in 1963, joined @CharlesMBlow to talk about this new age of racing, Wallace's win and more. pic.twitter.com/oUpC2mb5ih

Those are the names of all the NASCAR Cup drivers who have sported the golden arches of McDonald’s on the hood of their car in at least one Cup points race since 1995.

None of them won.

Before Wallace on Monday, the only driver able to brag about taking one of the world’s most recognizable brands to victory lane in NASCAR was Jimmy Spencer.

He did it twice in 1994 driving for Junior Johnson. The last win occurred on July 24 at … Talladega.

The McCurse is broken! McDonald's was 0-for-441 in NASCAR races since their last win in July 1994. 9,934 days. They head back to victory lane at the site of their last win. pic.twitter.com/g0feZL27FU

“We have McDonald’s, who has been a big part of our sport for many, many years, decades, and they haven’t won in decades,” 23XI co-owner Denny Hamlin said. “To have them in victory lane as one of the founding partners of 23XI. Toyota, I mean, they’re supporting my crazy dream.”

McDonald’s has been a supporter of Wallace since his time in the No. 43 at Richard Petty Motorsports.

“Really appreciate them sticking with it, sticking with me, continuing to help me push myself to be better,” Wallace said. “To get them to victory lane, I think it’s been since the ’90s if I’m correct, it’s been a long time. Congrats to them. I know I’ll be getting a 10-piece meal with a large fry and large Dr. Pepper when I leave this place.”

Robert “Bootie” Barker has been in NASCAR for a long time.

His first Cup race as a crew chief was the 2003 Daytona 500 with Dave Blaney.

Monday’s race at Talladega was his 484th Cup race on a pit box. But it was his first time to celebrate a victory.

Barker wasn’t even Wallace’s crew chief a month ago.

His last job as crew chief was in 2017 working with Ty Dillon at Germain Racing. He was working in 23XI Racing’s engineering department this year when he was swapped in to take over for Mike Wheeler the week before the Bristol Night Race.

Talladega was just his third race working with Wallace.

“I was really excited about getting another opportunity. But I didn’t plan on it this way. I just planned on doing a good job in whatever my role was. It takes a lot of things to win a race. It’s a million ways to lose one and one way to win one. So, I mean, I did what I had to do to get this far.”

In his two-decade career, Barker said he’s “never had this many resources” at his disposal like what 23XI Racing provides.

“My main focus was to make sure the team, the strength of the team, was brought to bear,” Barker said. “In other words, I didn’t do anything to inhibit us, make no mistakes, put us in position to succeed has been my main focus.

“I knew Bubba could get it done. I knew we had the stuff and the people to support him to knock it out. Not saying it was anybody’s fault, per se, but we had had troubles early this the year, fluke things, whatever. It’s been my focus always with him and us to just don’t beat ourselves.”

Twelves months ago, 23XI Racing did not exist.

No employees, no shop. Nothing.

Thirty-one races into its existence, the team co-owned by Denny Hamlin and NBA legend Michael Jordan accomplished something that’s only been done twice since Hendrick Motorsports did it in 1984.

23XI joined Spire Motorsports (2019) as teams who have won a Cup points race in their first year of operation.

“Emotions obviously super high,” Hamlin said. “I didn’t realize it would be this high at this moment. I understand the process in which it takes to get to this point, winning in NASCAR’s highest level. I’m in every meeting, I’m hands on with the team. I know how hard they work.

“I certainly am more emotional, more happy with someone else’s victory than mine on this day.”

Hamlin obviously knows what it’s like to get a first Cup win as a driver, albeit far sooner, having won at Pocono Raceway in his 21st start in 2006. That was after he won the exhibition Budweiser Shootout at Daytona.

The feeling of winning as an owner is different.

“It’s like watching your kid succeed at whatever they’re doing, whether it be baseball, musical theater, whatever,” Hamlin said. “I have no relation to anyone on this team, but they are family. We spend a lot of time together, we work hard together. I know the people within the shop work very, very hard. They had to work their tails off to get this team off the ground just 10, 12 months ago.

“I can understand and I appreciate this win more as a car owner because I know how hard the last 10 to 12 months have been putting this thing together and trying to take it up to NASCAR’s highest level, which is not easy, obviously.

“We’re still again in the building stage, we’re still in the growing stages of our team. This is just a huge morale boost, a huge confidence boost for Bubba. There’s a lot of positives that will come out of this that will linger for a very, very long time.”

A few words from MJ on our first Cup Series win in team history. pic.twitter.com/J35urIAXEY

Wow, the next great driver, right. Still 20th in the standings and the hype is greater than Danica. Just Wow. Just call Bubba what he is and that is lucky. He was in the right place at the right time. Guess now the MSM will make him the next HOF driver……

Just wow; you scribes are spazzing out with your ” black this, 1st African American that, on and on. Bubba just looks at himself as a race car driver ( or used to). Technically doesn’t he represent two races? His father is white, a fact that I’m sure you all can’t stand.

Blah blah blah blah. It’s a crapshoot restrictor plate race that ended prematurely due to rain. Not much difference than a child winning at musical chairs. When the music stops someone is in the right place at the right time. Stop trying to embellish it to make it more epic and meaningful than it was.

You can’t compare Bubba Wallace and Wendell Scott. Wendell is real African American who had to deal with Southern racists every week. Bubba, not so much.