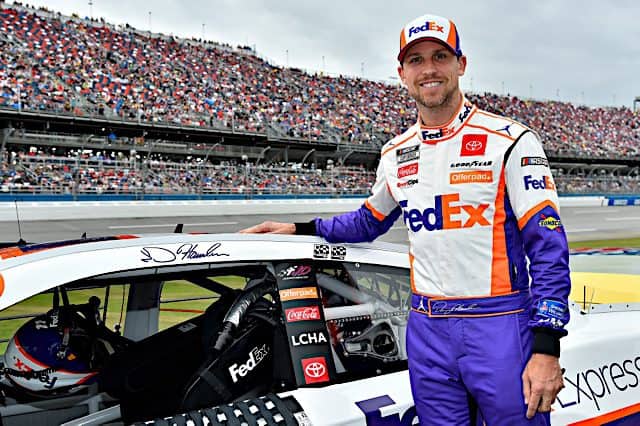 The NASCAR Cup Series’ last playoff race in the Round of 12 is this Sunday (Oct. 10) and Denny Hamlin is on the pole at the Charlotte Motor Speedway ROVAL.

Ryan Blaney will wheel the No. 12 Penske Ford from sixth and Stewart-Haas Racing’s Kevin Harvick is seventh. Chase Elliott is eighth, Kyle Busch begins ninth and Kyle Larson finishes up the top 10 starters.

William Byron and Alex Bowman will line up 11th and 12th as the final two playoff drivers. All drivers contending for the championship will start up front, while the remaining drivers line up behind them. Harvick, Bell, Byron and Bowman are all below the cut line heading into the Charlotte.

The starting order was set by an equation that combined four performance-based categories. 50% of the driver’s and car owner’s finishing position from Talladega (25% each), 15% of where the driver’s fastest lap ranked and 35% of the team owner’s points ranking were added together, and whoever had the lowest score would start first.

IT’S BECAUSE THE FORMULA THE BRIAN GROUP IN DAYTONA CAME UP WITH TO GIFT THE POLE TO A DRIVER MEANS BUBBA CAN’T GET THE POLE. ALTHOUGH I AM SURPRISED THEY DIDN’T CHANGE THE “RULES'” TO ACCOMMODATE HIM. I THOUGHT THEY’D CHANGE IT TO THE LAST DRIVER TO WIN AN EXAMPLE OF BRIAN’S PRODUCT WOULD INHERIT THE POLE.