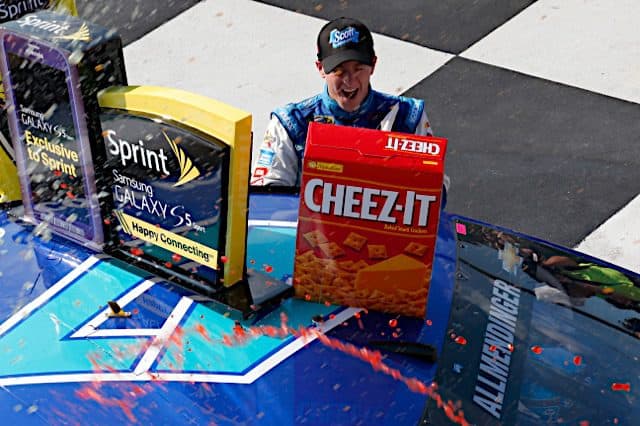 With Bubba Wallace‘s first career victory at Talladega Superspeedway on Monday (Oct. 4), it was the first time a Black driver had visited a NASCAR Cup Series victory lane in nearly 60 years and the first triumph for 23XI Racing in its debut season.

The win is also the first time a driver and team have simultaneously claimed their first win this decade, and it became one of the select such instances in which the two milestones for pilot and stable have coincided in the same race.

Some instances come close to qualifying. For example, in 2013, David Ragan scored Front Row Motorsports’ first victory at Talladega, but he had already won his first race back at Daytona International Speedway in 2011 with Roush Fenway Racing. A few years later, Chris Buescher scored his first win at Pocono Raceway for Front Row, but it wasn’t the team’s first; Ragan did that in the aforementioned Talladega race three seasons prior.

A driver and team have scored their first wins in the same race just three times in the past decade and it occurred twice in 2009, rounding out the past five instances of such an event.

In another rain-shortened affair, Justin Haley was in the finale of his three-race 2019 slate for fledgling Spire Motorsports. Having finished outside the top 30 at both Talladega and Sonoma Raceway, Haley started an inauspicious 34th at Daytona in July’s Coke Zero 400, which was postponed from Saturday to Sunday due to rain.

When a late block from Austin Dillon sent the No. 3, Clint Bowyer and a host of other cars crashing in turns 1 and 2 on lap 127, Haley snuck through the aftermath and stayed out when other cars elected to pit. With lightning in the vicinity putting the race on hold and the cars brought down pit road, eventual rain led NASCAR to call off the remainder of the event with Haley out front when they did. The then-20-year-old hoisted the trophy in the garage area in just his third start.

Haley has now scored four wins in NASCAR Xfinity Series competition since the Cup victory, two at Daytona and two at Talladega, and has made the playoffs each of the past three seasons. He will drive full time for Kaulig Racing in Cup in 2022.

Spire has continued its trend of driver rotations for each season, but Haley remains Spire’s best driver statistically to date, adding two top-10 finishes in the 2021 season.

Another current Kaulig driver and one of NASCAR’s longtime resident road course aces, AJ Allmendinger bounced all over the map early in his career. The California native raced for eight different teams in his first seven years of Cup competition, suffering a setback when a violation of the substance-abuse program in 2012 dropped him from arguably his best ride to that point with Team Penske. A part-time 2013 schedule with Phoenix Racing was his fallback until JTG Daugherty tabbed him to drive the No. 47 for nine races that same season.

Allmendinger had already reeled off impressive finishes in Phoenix equipment, coming home in the top 20 in five of his six races before he jumped in JTG’s No. 47, and the latter ride became permanent for 2014.

It was almost poetic: Prior to 2014, Allmendinger had never finished worse than 13th at Watkins Glen International, but couldn’t break through for a win. Marcos Ambrose, the other preeminent road course racer in the field, won back-to-back races at the New York track in 2011 and 2012 for Richard Petty Motorsports after coming so close with JTG at Sonoma in 2010.

Allmendinger only managed a few more top-five finishes before departing the team after the 2018 season. In 2019, he joined Kaulig on a part-time basis and essentially revitalized his career, winning at the Charlotte Motor Speedway ROVAL that year and scoring two victories the next. He also got the team its first Cup win, making an appearance at the Indianapolis Motor Speedway road course in 2021 and capitalizing on a penultimate-lap incident between the leaders.

He officially went full-time in the team’s No. 16 in 2021, scoring four wins and emerging as a championship contender. He’s not just winning on road courses, either — nearly half his NXS victories to date have come on ovals.

Long before Furniture Row Racing reeled off nearly 20 wins with Martin Truex Jr. behind the wheel, the small Colorado-based operation was in a sort of Cup Series purgatory. Fielding drivers like Kenny Wallace, Jimmy Spencer and Joe Nemechek from 2005-08, the team hired Regan Smith for a part-time 2009 campaign.

Smith was fresh off a still-contested finish at Talladega where he nearly scored a win for Dale Earnhardt, Inc., but never sniffed a top-10 finish, much less a win, in 2009 or 2010.

In 2011, Smith was running sixth in the Showtime Southern 500 at Darlington Raceway when a caution waved with 10 laps to go. Most of the field ventured down pit road for tires, while Smith stayed out, and despite another caution during the final laps that extended the race, he held onto the lead.

The No. 78 had to hold off Carl Edwards, who led 57 laps, and got a push from Brad Keselowski on a green-white-checkered restart to grab the lead. Smith bobbled on the backstretch on the last lap, the back end of the car nearly tagging the wall, but held on to beat Edwards by less than two-tenths of a second.

Smith was one of five first-time winners in 2011, alongside Ambrose, Ragan, Paul Menard and Trevor Bayne, and added another top five and three more top-10 efforts that year. Smith left the No. 78 team to fill in at Hendrick Motorsports for two races when a concussion sidelined Dale Earnhardt Jr.

He joined Phoenix Racing (seemingly a trend for this list) for the last two races of 2012 and the start of 2013 and bounced around Cup for several more years, driving for a number of teams that included one full-time year for Tommy Baldwin Racing and for several other teams as a fill-in. Smith did find success in the Xfinity Series, though, winning five races (and a one-off at Homestead-Miami Speedway in 2012) and contending for championships in three full years with the team.

For Furniture Row, as they say, the rest is history. Busch had a solid year in 2013, followed by Truex joining up for a mediocre 2014. From 2015 through the team’s folding in 2018, though, Truex exploded, winning 17 races and netting 91 top-10 finishes as well as the 2017 championship. The team even expanded in 2017, fielding a second car for Erik Jones, but Truex carried the team and made the Championship 4 in each of the stable’s last two seasons.

David Reutimann might be known as much for a pair of vicious crashes while with Michael Waltrip Racing as he his for a pair of wins.

Reutimann first appeared in Cup on a consistent basis in 2007, but the most notable point for him that year was a violent crash at Auto Club Speedway that left him briefly unconscious. The next year, he recorded four finishes inside the top 10 as one of Toyota’s first major teams continued to find its footing.

Already recording several solid results in 2009 with a young Rodney Childers atop the pit box, Reutimann and company headed to Charlotte for the longest race of the season. The Coca-Cola 600 ended up postponed a day by rain (sounds familiar), and a decision to conserve fuel put the No. 00 out in front when the race was red-flagged for rain.

In hindsight, it doesn’t feel like too much of a fluke: Reutimann grabbed two poles that year along with 10 top-10 finishes, five of those in the top five, and the next year ran well at Chicagoland Speedway and eventually passed Jeff Gordon for the lead and victory.

Once he departed from MWR after the 2011 season, Reutimann drove for Tommy Baldwin part time in 2012 and also had a stint with Phoenix Racing, later running for BK Racing full time in 2013 as his last such effort in Cup. His last career start came in 2014 at Richmond Raceway, where he finished 29th for Front Row.

The younger Waltrip brother’s team carried on, adding Truex in 2010 and then Clint Bowyer to replace Reutimann in 2012. Bowyer visited victory lane three times in 2012 in the No. 15, while Truex finally got the No. 56 there in 2013 at Sonoma and Brian Vickers followed suit with a shock win at New Hampshire Motor Speedway.

Reutimann became more involved in the dirt-track and late-model scene after his career came to a close, while MWR folded entirely in 2015 after fielding a rotation of drivers through its final two years. Bowyer was the lone staple, sticking with the team through 2015 and eventually finding a home at Stewart-Haas Racing, where he retired from after the 2020 season.

Add another instance of a driver’s and team’s first win coming at Talladega, this one dating to 2009 with Keselowski driving for James Finch’s Phoenix Racing (there they are again!). It’s also the second time on this list that Edwards was running in the top two near the end of a race and fell victim to the milestone.

More known for Edwards’ airborne journey into the catchfence and subsequent jog across the finish line on foot than the win, the triumph for Keselowski came in just his fifth start. Behind Edwards and in front of Ryan Newman and Dale Earnhardt Jr. as the quartet raced into the trioval, Keselowski looked outside and then darted inside as Edwards faded up to block.

When Edwards tried to block low, he spun across the No. 09’s nose, sending the No. 99 airborne. Edwards spun a full 360° in the air and nosed upside-down into the catch fence, which held and bounced the Ford back onto the racing surface.

By that time, Keselowski had crossed the start-finish line under the checkered flag, receiving some congratulatory dooring from his then-Xfinity Series owner, Earnhardt.

Keselowski joined Team Penske the next year in the No. 12, suffering an eerily similar crash at Atlanta Motor Speedway off Edwards’ bumper, but moved to the No. 2 for 2011. He scored 34 wins from 2011 onward for Penske and has the opportunity to add a few more to that list this season. He also won the 2012 championship, making the Chase and playoffs every year outside of 2013.

As for Phoenix Racing, the three top-10 finishes and victory proved to be its most successful season ever. Until Kurt Busch joined for the 2012 campaign, the team kept the No. 09 until 2011, when they fielded a rotating roster of drivers that included Landon Cassill and Bill Elliott and switched to the No. 51 midseason.

The team sold to HScott Motorsports in the middle of the 2013 season after a rotation of six drivers over 25 races. Smith’s two top-10 finishes that year were Phoenix Racing’s last in Cup competition, though an Xfinity win by Busch in 2012 was its last in any NASCAR touring series.