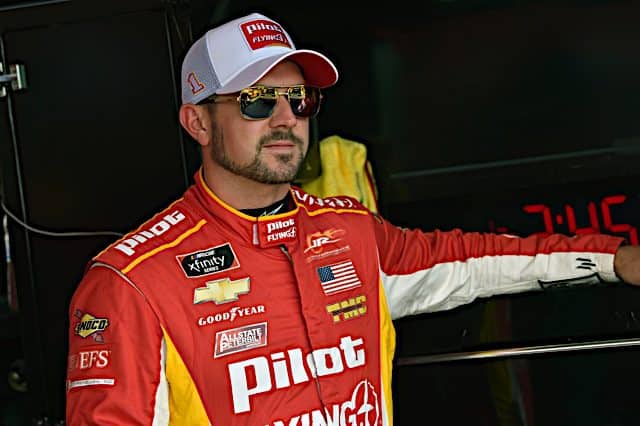 Michael Annett will retire from full-time competition at the end of the 2021 NASCAR Xfinity Series season, he announced Wednesday (Oct. 6).

Annett has driven for JR Motorsports full-time since 2017, wheeling the No. 1 car to victory lane in the 2019 season opener at Daytona International Speedway.

The 35-year-old has missed seven races this year due to a stress fracture in his leg and will miss Saturday’s (Oct. 9) Drive for the Cure 250 at the Charlotte Motor Speedway ROVAL as well. He will be replaced by Josh Berry, who drove Annett’s No. 1 car to a win at Las Vegas Motor Speedway on Sept. 25.

“I’m just so grateful for the opportunities I’ve had,” Annett said in a press release. “Being able to drive racecars for a living is honestly a dream come true for me. It’s been a privilege to work with some great teams and alongside some of the most talented folks in the garage.

“None of this would have been possible without the support of my partners, and I am happy to call them life-long friends. It’s those relationships and friendships that are the most rewarding.”

After earning an ARCA Menards Series win at Talladega Superspeedway in 2007 as part of four starts that season, Annett made his national touring series debut in the NASCAR Camping World Truck Series in 2008. He also won the ARCA opener at Daytona to begin the 2008 season.

In total, Annett has made 431 NASCAR national series starts with one win, 20 top fives and 95 top 10s. His full-time NASCAR Xfinity Series career began in 2009 with Germain Racing, where he spent two years before joining Rusty Wallace Racing in 2011.

Annett then joined Richard Petty Motorsports’ Xfinity program in 2012 where he spent two seasons, earning a career-best points finish of fifth in 2012 before making the leap to the NASCAR Cup Series with Tommy Baldwin Racing in 2014.

After spending 2015 and 2016 driving for HScott Motorsports, Annett joined JR Motorsports where he will finish his full-time career.

We appreciate everything @MichaelAnnett has done for @JRMotorsports and we are all wishing the best for him in his next chapter https://t.co/jdzjkpxoKu

JRM is proud to be part of your career! We appreciate you, your family, and your sponsors contributions to this sport. Have a blast in the next chapter! https://t.co/y75JMRe7yZ

Gotta respect going out with class instead of hanging around begging for a ride and whining.